The 83rd Masters delivered drama and excitement in spades once again on Saturday as Francesco Molinari continued his unassuming pilgrimage to the top of the golf world and Tiger Woods charged to a place in Sunday’s final group, while the main Australian chances faltered.

Molinari compiled a second straight bogey free round at Augusta National in fine conditions, the Italian last losing a shot to par on the 11th hole on Thursday, to reach a tournament total of 13 under par. His third round 66 in the final group of the day alongside Jason Day played in front of a small collection of patrons, with the vast majority of people on the famed venue’s grounds attempting to get a glimpse of Woods as he compiled a 67 to draw level with early finisher Tony Finau at 11 under par.

“Obviously very, very happy again,” Molinari told the media after his round. “I thought maybe I played slightly better yesterday, but today, mentally was very good. Made two big putts on 4 and 5 to save pars, and then kind of get going from there. “Played the back nine probably as good as I've ever played over here, so really pleased about that. And then obviously a good save on 18. So nice to keep another clean scorecard.”

Woods and Finau will join the reigning Open champion in the final group on Sunday, with players going out in threesomes off two tees from 7:30am due to forecast thunderstorms set to hit Augusta around 4pm.

Although the overwhelming support was for Woods on Saturday, with the penultimate group of Adam Scott and Brooks Koepka also having a small following despite each being right in the mix at times during the third round, the 14-time major champion and the rest of Molinari’s challengers will need their best golf to haul in the World No.7.

Molinari has been almost robotic so far this week at Augusta, ranking highly in driving accuracy, greens in regulation and putting, while also appearing unfazed by the pressure of winning Italy’s first green jacket with the greatest player of the modern era now breathing down his neck.

But the 36-year-old isn’t getting ahead of himself, despite some of the big names from Friday’s leaderboard struggling to put themselves in the best position to challenge for the title. “We are all very close. Obviously it's nice to be a little bit ahead, but you might just need one hole to change. You never know how it's going to go, especially around a course like here,” Molinari said of the potential outcome on Sunday.

“So I think the key for me is going to – really going to go out tomorrow and just do my thing. Keep staying aggressive like I was trying to be today. Hit the shots. Hit the middle of the clubface as often as I can and make smart decisions, and we'll just take it from there.”

RIGHT: Finau shot the equal best round of the day on Saturday. His 64 earning him a place in Sunday's final group. PHOTO: David Cannon/Getty Images.

Molinari’s lead was built on Augusta’s back nine, where he made four straight birdies starting at the par-3 12th hole. Molinari nearly holing out for a one at Augusta’s shortest hole, before two putt birdies at both the back nine’s par-5s either side of another close approach at 14. His up and down from the greenside bunker at the last securing his two shot lead.

Four-time Masters winner Woods appears Molinari’s most likely challenger, the 43-year-old’s back nine evoking feelings of past victories at Augusta, with Woods using his past experiences at Augusta National to build confidence and shape his game plan.

“I drove it well and hit my irons well. I made some putts,” Woods said. “I just let the round just kind of build. And I don't need to go after every single flag. Just put the ball in the correct spots so I can have gettable looks and gettable putts. And I was able to do that and I tried to keep the ball below the hole as best as I possibly could. And I made sure that I had those type of looks, and if I gave myself those looks the way that I'm hitting my lines I'm going to be all right.”

Woods missed his drive well right on 11 and then left on 13, and managed to escape with par at the difficult 11th and a birdie at the par-5 13th after finding a gap in the pines on 11 and a fortunate bounce out of the trees at 13. Significant roars for Tiger ringing out among the Georgia pines for the first time since his return from his fourth back surgery. “It's been a while since I've been in contention here. But then again the last two majors counts for something,” Woods said of being in with another chance at The Masers. “I've been in the mix with a chance to win major championships in the last two years. And so that helps. And tomorrow it will be – it will be interesting to see if that wind comes up like it's forecast, 15, 20 miles an hour around this golf course is going to be testy. And got to be committed, hit the proper shots and then hopefully we time it right.”

Joining Woods and Molinari in Sunday’s final group, Finau was the first player to reach double digits under par, the American turning in six under par 30 before recording two birdies at 13 and 15 to sign for a bogeyless 64 that included a near albatross at the par-5 8th hole.

“I got off to a nice start. I was happy to make birdie on 1. I hit two great shots and a putt that just barely lipped in on 1 and was kind of off to the races there,” Finau said of his hot start. “I drove it nicely and a couple tap‑ins on 2 and 3 and I was just kind of on my way, I kind of got in that zone. And looked up at the leaderboard, and I knew I just needed to – I was well in front of the leaders, I needed to keep making birdies, because I knew they were going to have a lot of opportunities, the guys that were playing well.”

The only other play in double digits under par going into the final round is Koepka, who will be ruing missed birdie chances at the final three holes after an eagle at the 15th hole that could have given him a share of the lead.

First round leader Koepka, like Molinari, is one of the form players in the world and major champion with the ability to make plenty of birdies. Something the big hitting American knows he will need on Sunday if he is to claim his third major in four starts.

“I felt like I played pretty well, but just some sloppy mistakes, a couple short missed putts, but overall played well,” Koepka said of his third round. “Even the putts I missed on the last three holes I thought I made, so rolling it well, just need to give it a little bit more pace.

Sitting behind Koepka is a host of players who will hope to make early birdies and put the pressure on the leaders on Sunday, with Augusta’s back nine renowned for its ability to elevate players to victory and bring potential winners to their knees.

Webb Simpson also fired a 64 on Saturday to sit alongside Ian Poulter at nine under, while Matt Kuchar, Justin Harding, Xander Schauffele, Louis Oosthuizen and Dustin Johnson lie a shot further back.

After sharing the lead overnight, Adam Scott and Jason Day both struggled with Augusta’s second nine on Saturday to be at seven and six under respectively.

2013 champion Scott looked to be making his charge after back-to-back birdies at the 12th and 13th holes to get to nine under, before a par at the 15th that effectively dropped a shot to the rest of the leading group, which was followed by a bogey at the par-3 16th from a difficult lie in the greenside bunker and a three-putt bogey at the final hole.

“It wasn't good,” Scott said of the downhill lie in the bunker at 16. “I mean I pulled it off the slope. I wasn't really allowing for it to go that far left. And it was not an easy shot by any means. I don't think I would have got it inside ten feet with a good shot. But I just didn't allow for it to come out so far left and that's why I lost it down the slope.”

Scott’s troubles mainly came on the greens on Saturday, the Queenslander having completed a 30 plus minute putting session in the morning with a different putter than he used during the round to gain a better feel of the speeds and roll of Augusta’s greens, which are rolling slower than in previous years after large amounts of rain during the week. Something Scott had not factored into his preparation.

“I tried to read the pace of the greens, I found them very slow. Maybe the slowest I've ever seen them here,” Scott said of the putting surfaces. “And early on I just – I didn't have enough pace on putts and then I had too much pace.

“I find the uphill is so slow and I kind of geared my putter for fast greens. So I hope they cut them short tomorrow.”

Day's difficulties also began at the 15th, where he made a double bogey seven after laying up with his second shot then finding the water in front of the green. Another bogey at the final hole leaving plenty for the 31-year-old to do on Sunday if he is to find himself in contention.

“That was just a poor mental error that I probably should have calculated a little bit more distance behind the pin. I was trying to be a little bit too aggressive to that pin location,” Day said of finding the water at 15. “I miss hit it a little bit and it pulled up short. That was a poor mistake that I made.

“I don’t feel like I am too far back, I think if I can shoot seven under that may give it a good scare. But the way Frankie played today, he played some solid golf. And the way Tiger and all the other guys are playing right now – it is Sunday at Augusta and hopefully we have tough conditions. Because if we have tough conditions and I can shoot a good one and claw my way back into the lead.”

The other two Australians in the field, Cameron Smith and Marc Leishman, both managed what Day and Scott couldn’t, breaking par. But Smith, who now sits at three under, and Leishman, a shot back, will need plenty of help from those in front of them and a low round themselves if they are to find themselves with a chance on Sunday at Augusta. Something Scott believes is possible for himself and the rest of the field if the traditional Sunday pins are in place.

“Can I shoot 61? I think it's possible the way the course is, especially with the pins tomorrow. But that's what I need to do,” Scott said. 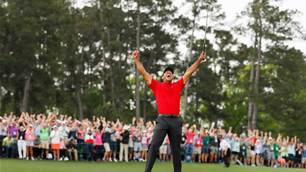