Determined to end golfers being forced to choose between optimised aerodynamics and low centre of gravity (CG) in woods, and either distance or forgiveness in irons, Cobra has developed its new King F9 Speedback driver, fairways, hybrids and irons.

The longest and fastest driver in company history, the new F9 Speedback combines an extremely aerodynamic head design with low CG in what Cobra calls an industry first that it touts as increasing speed and distance, as well efficiency and forgiveness. Characteristics that are also enhanced by an updated CNC milled face featuring the company’s ‘E9’ face technology.

The more aerodynamic shape of the Speedback is achieved by Cobra’s engineers raising the perimeter skirt, aft (tail) and crown, and rounding the leading edges of the head, reducing drag to improve speed and stability. The flatter top of the driver made with “golf’s first ultralight carbon wrap crown design” that incorporates a 12 percent larger area of carbon that wraps around the body of the driver and is 10 grams lighter than a traditional titanium crown.

To further enhance the aerodynamics of the new model, polymer trips on the crown and titanium trips on the sole, part of Cobra’s ‘360 Aero’ technology, are precisely located to manage airflow, while ‘PWR Ridges’ ensure greater energy return to the ball at impact and further reduce drag for increased clubhead speed. Three percent thinner and 10 percent lighter than the face of the King F8, the CNC milling process used to create the face of the new Speedback driver allows for tighter tolerances and improved bulge and roll that delivers more forgiveness on mis-hits across the entire face.

Featuring electronically enabled Cobra Connect Powered by Arccos grips that allow golfers to track their performance and statistics, the Speedback driver delivers customised performance through interchangeable two varied weights in the sole to adjust launch and spin, as well as Cobra’s ‘MyFly8 with Smart Pad’ technology that offers eight loft options in each of the 9˚, 10.5˚ and 12.5˚ drivers, while maintaining a square face at address in every setting.

“This year, Cobra engineers have taken aerodynamic performance to the next level. We believe we’ve found the ultimate formula for speed as true aerodynamic innovation and low CG has never been combined this successfully,” Cobra’s Vice President of R&D Tom Olsavsky said. “Our Speedback technology blends a more efficient aerodynamic shape with a lower, deeper CG, and our thinnest, hottest CNC Milled Face design to deliver unparalleled speed, distance and precision in our F9 Metalwoods.”

Incorporating the first CNC milled face in a fairway wood that produces as much as a 2.5mph ball speed improvement on traditional hand polished faces, the King F9 Speedback similarly incorporates a low and deep CG. Achieved thorough the combination of a carbon fibre crown, 360 Aero trips, PWR Ridge and a fixed tungsten sole weight, the CG of the Speedback fairway is further optimised by re-engineered ‘Baffler’ rails on the sole that also improve turf interaction.

Progressing from shallower designs in the lower lofted models to steeper in the higher lofts, the rails form part of the ‘MyFly8 with SmartRail’ technology that allows for eight settings in each loft in both the standard and more compact ‘Tour’ model fairway woods. 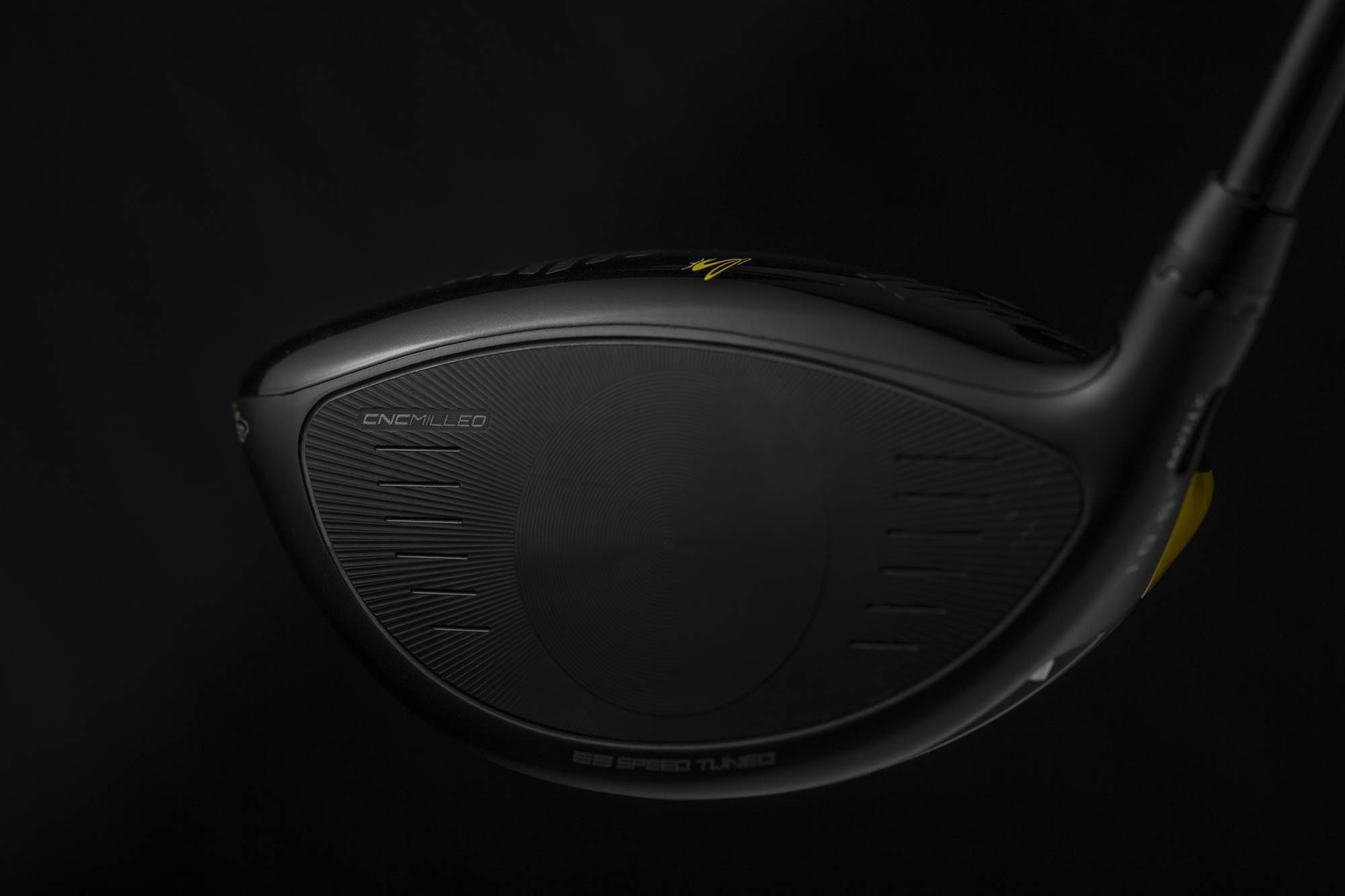 Also incorporating two Baffler rails on the sole and a fixed 15 gram weight to achieve an optimal low and deep CG placement, the King F9 Speedback hybrid is offered in both traditional variable length and one length options to complement the iron models of the same name.

Completing the new range are the King F9 Speedback irons, which like the hybrids are available in variable and one length.

“It cannot be overstated just how technologically-advanced the King F9 Speedback irons are,” Olsavsky said when introducing the new model. “Golfers have been forced to choose between distance or forgiveness in their game improvement irons. If you wanted more distance, then you sacrificed forgiveness, and vice versa. With the new Speedback irons golfers can have their cake and eat it too.”

The Speedback sole and shaping incorporates a belt of steel positioned low around the back of the head that is precisely located to maintain traditional game improvement iron sole widths, while also working together with tungsten located in the heel and toe of the mid- and long-irons to further raise the MOI for improved ball speed and accuracy on mishits.

Incorporating many of Cobra’s previous technologies, including CNC milled faces and grooves that change in size and shape through the set for optimum spin, progressive hosel lengths and an updated forged ‘E9 Pwrshell’ face, the King F9 irons feature a multi-material medallion designed to produce a more pleasing sound and feel by dampening vibrations caused at impact and like every club in the new F9 range, come standard with Cobra Connect grips.

The single length version of the F9 Speedback irons have been engineered for optimum set performance at 7-iron length through the use of progressive sole designs that widen in the longer irons for even lower CG and higher launch, multiple shaft weights throughout the set and varied lie angles for loft specific performance.

The King F9 Speedback range will be available around the world beginning January 2019.

To find out more, visit www.cobragolf.com.au/f9