Mike Clayton has challenged the likes of Jason Day and Adam Scott to rush home after the Masters to give Australian golf a boost in the post-coronavirus era.

Former professional-turned course designer Clayton said it was crucial the Australian swing had the support of its biggest names in a crowded market once competition resumes later this year.

That will prove difficult though, with November's pushed-back Masters potentially colliding with the Australian Open and Australian PGA Championship, which are likely to be played in the following weeks.

Quarantine periods for domestic and international travellers could still be in play then, complicating matters for Australian golf administrators currently running through the many scenarios they may be faced with later this year.

The Australian Open's anticipated return to Melbourne's Kingston Heath could be delayed to allow some breathing room and Clayton hopes Day, Scott and fellow US PGA Tour performers Marc Leishman and Cameron Smith recognise what their presence could do for Australian golf.

"The thing we ought to be able to do this year for the Australian Open is to impress upon our best players in America how important it is to come here and play without demanding a fortune in appearance money, if anything," he told Golf Australia's Inside the Ropes podcast.

"For the amazing living those four of five guys have made out of the game, this is one time we need them to come back and support the Australian Open and PGA without having to write a big cheque for them to turn up."

Injuries have restricted former world No.1 Day's Australian appearances during his career but Scott and Leishman have both indicated their intent to play in Australia this year and Smith has been a regular on home soil since bursting onto the scene in 2015.

"For the amazing living those four of five guys have made out of the game, this is one time we need them to come back and support the Australian Open and PGA without having to write a big cheque for them to turn up." – Mike Clayton

Scott has already thrown his weight around, broadcasting a nine-hole round at boutique Sunshine Coast club Maleny last Friday on Instagram that was viewed by thousands.

Clayton said the pandemic-enforced shut down should be viewed as a chance to strengthen tournament golf in Australia.

"It looks like the European Tour is going to be somewhat hurt out of this, so it's a chance to reset the game outside the United States and try and create one great tour," he said.

"Which is really almost what we've got now with South Africa, the Middle East, Asia, (and European-sanctioned) Australian PGA and Vic Open events."

Clayton also urged powerbrokers to take lessons from the popular Vic Open, which features both a men's and women's field.

"In terms of giving the fans what they want, the Vic Open is the model for that," he said.

"It's not the best title in the country - you'd rather win the PGA or Open - but it's the best tournament I think." 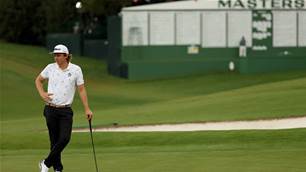