Northern Ireland's Jonathan Caldwell has given himself the perfect belated birthday present by claiming his first European Tour title in the inaugural Scandinavian Mixed event.

Caldwell, who celebrated his 37th birthday on Thursday, fired an eagle and eight birdies in a brilliant final round of 64 to finish 17-under par, a shot ahead of Spain's Adrian Otaegui.

Otaegui had a putt to win on the 18th but charged his birdie attempt four feet past the hole and missed the return putt.

England's Alice Hewson needed to eagle the last to force a play-off but had to settle for a par to finish third in the first event on the European Tour to feature men and women competing on the same course, though playing off different tees, for one prize fund and one trophy.

There had been high hopes of an Australian victory going into the final round with Jason Scrivener in a tie for the lead with three others and veteran Scott Hend just a shot behind.

But the 32-year-old Scrivener, who'd racked up a second-place finish at the Abu Dhabi Championship in January and was hoping for a first win on the European Tour, ended up shooting a disappointing one-over 73, eventually finishing joint-seventh on 11-under.

The 47-year-old Hend was joint-fourth, just four shots off the pace, with his last round 70.

"The golf club at home will probably be going bonkers, so just put a tab on and crack on boys and enjoy." – Jonathan Caldwell

Caldwell, who'd partnered Rory McIlroy in the 2007 Walker Cup, began the day three shots off the lead but covered his first 11 holes in six-under and then holed from 40 feet for an eagle on the 14th to move two shots clear.

"It's been a dream of mine for an awful long time," Caldwell said. "A lot of hard work goes into it. It hasn't quite sunk in yet, but hopefully more to come.

"The win is special enough, but to be doing the presentation on the 18th green with (tournament hosts) Annika Sorenstam and Henrik Stenson, two absolute icons in the world of golf, is quite unbelievable.

"In 2009, I played my first year, lost my card, played mini Tours and Challenge Tour over the years, worked as well in a local golf store, Nevada Bob's in Bangor for four or five years while I was playing EuroPro Tour.

"Especially after a bad week you can think, 'What am I doing?' But I certainly didn't want to spend the rest of my days working in a golf store so I stuck at it and persevered and thankfully I did.

"It's been a long road but finally I'm here. The golf club at home will probably be going bonkers, so just put a tab on and crack on boys and enjoy." 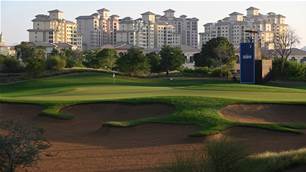 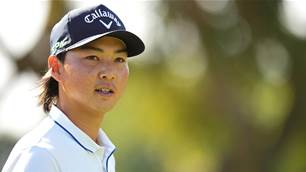