Brad Burns has pulled off a stunning wire-to-wire win in the Lincoln Place NSW Senior Open at Thurgoona Golf and Country Club.

But he did it the hard way.

Starting with a seven-shot lead, Burns gave the field a hint of a chance with right from the outset with bogies on the opening two holes to drop back to 11 under.

It was a stumble and in stark contrast to his dominant performance over the opening two rounds.

His playing partner, Lucien Tinkler was the first to make a move, getting to within a couple of shots midway through the round. Sadly for the Victorian, a missed chance on the par-5 11th followed by a bogey on the par-3 12th saw him fall away.

Peter Fowler, playing in the group in front was also having a day of it. The Sydneysider put together an excellent round of 67 to finish within a stroke but will be left thinking what could have been when he missed the green on the par-3 16th. The resulting bogey saw him drop a shot at the worst possible time.

No one would have expected the tournament could come down to the final hole, and when Burns dunked his approach on the 17th into the front trap, it seemed even a playoff might have been on the cards.

"I've been in this position before, but it is so hard, leading by so much heading into the final day and you've got guys like Peter Fowler, O'Malley and Pete Senior behind.” – Brad Burns

Thankfully, Burns pulled off the remarkable and slotted a 14-footer for the save, giving him a one-shot buffer down the last.

It was all he needed, and a safe approach to the middle of the 18th followed by a lagged put to about eight inches was all the Queenslander required.

Burns was a relieved man post-round.

"A lot of relief actually," he smiled. "I got off to a bad start with a couple of three-putts early, and I had to grind it out all day basically.

"I holed a good putt on 17. I thought I hit the fairway, but it ended up behind a tree."

Burns agreed the comfort of a seven-shot buffer at the beginning of the day might have got inside his head, leading to some overly conservative play.

"I've been in this position before, but it is so hard, leading by so much heading into the final day and you've got guys like Peter Fowler, O'Malley and Pete Senior behind.

Victorian Greg Wilson claimed the amateur medal, with a three round total of 220. 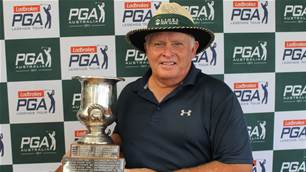 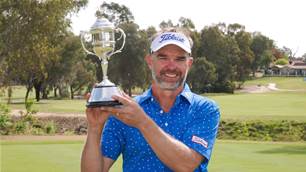 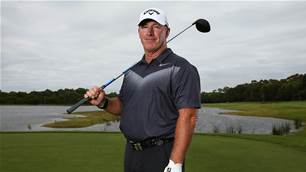 Legends spearhead the Swing in the West

Burns won't jet back to Jets