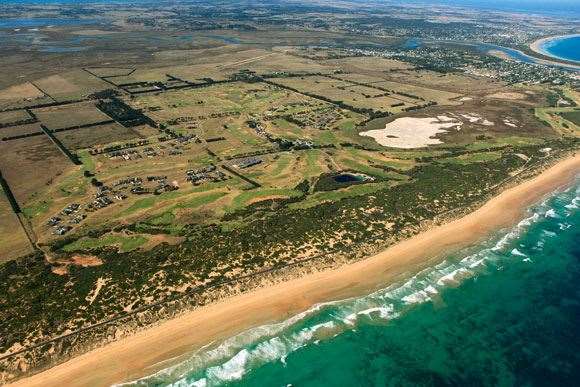 Where else would you rather be than on the Thirteenth Beach layouts? Images: Getty Images

The email gag has been around for years – a man’s “perfect day” versus a woman’s. She goes shopping, drinks champagne and does a fitness class with a funny, handsome trainer. He eats oysters, drinks Heineken, smokes Cuban cigars and takes a private jet to Augusta, where he shoots six-under. The joke’s been viral since ‘98 and still rings a little true. Especially the golf bit.

Because, speaking for the boys, a golf trip is like shagging. Even if it’s bad, it’s still good. You play golf and laugh with your mates. You drink beer in new parts of the country. You meet local people, and drink beer with them. And you eat and drink and play golf again, and you do it with your pals. How good is that?

Australians, blessed as we are with world-class, accessible golf courses, can be discerning golf tourists. There’s the allure of the Gold Coast. There’s Mornington Peninsula and Melbourne’s Sandbelt, probably the best sliver of golf real estate on Earth. There are bounties to be had in the Hunter Valley, around Adelaide and Perth and all along the Murray. There’s Bonville, Barnbougle Dunes. And there’s the Bellarine.

The Bellarine? Yep, the western peninsula of Port Phillip Bay, south-east of Geelong, where I played three superb courses, partook of succulent local meats, supped of delicious wines and slept in self-contained, four-star accommodation. Gee, it’s good, and we can safely set it in concrete that: a) sometimes my job is a golden kiss upon

the buttocks; and b) the Bellarine is to golfers as Byron Bay is to affluent, discerning ‒ though drug-addled ‒ hippies.

After a 40-minute drive from Avalon Airport, I’m through the gates of 36-hole Thirteenth Beach and straight onto the first tee of the Tony Cashmore-designed Beach Course (the Creek Course, co-designed by Cashmore and Nick Faldo, is being played by the members). I join the golf day of the old boys of Melbourne University Blues footy club, and am partnered up with Barry, Mick and Geoff, a GP who happens to be the Geelong Cats’ doctor. The Bellarine is Cats country and if you’re down during footy season, it would be remiss not to catch a game at Kardinia Park. 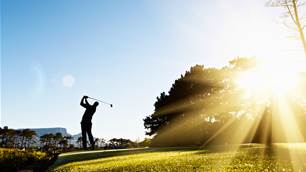 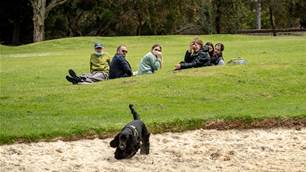