The Covid-19 pandemic, the need to ensure public safety and concerns over quarantine requirements have forced the postponement of the nation’s most prestigious golf tournaments, the Australian Open and the Australian PGA Championship, until early-2022

The ISPS Handa PGA Tour of Australasia and Golf Australia jointly announced today that the Australian PGA Championship, scheduled for December 2-5 at Royal Queensland, has been pushed back to January 13-16, 2022, while the Open has moved from 25-28 November at The Australian Golf Club in Sydney to a date yet to be announced in late-January or February.

Both bodies said they were disappointed to have to make changes to the planned dates, and cited concerns over public health and the potential difficulties surrounding quarantine arrangements for Australian and international golfers as the reasons for the change of date.

“These decisions are not taken lightly when we are talking about our flagship tournaments that are playing opportunities for our members.” - Gavin Kirkman.

PGA of Australia chief executive Gavin Kirkman said that with continued momentum with the Covid-19 vaccination program, the governing bodies were very optimistic that the environment would change substantially by early next year.

“These decisions are not taken lightly when we are talking about our flagship tournaments that are playing opportunities for our members,” Kirkman said.

“But as much as the number of Covid-19 cases is a big concern, it’s also the quarantine requirements that make it difficult to run golf tournaments. Not all countries require international visitors to quarantine – America for example – and that puts Australia at a disadvantage in an international sport.”

Golf Australia chief executive James Sutherland added that, in addition to quarantine issues, public health considerations were a primary driver for the deferment.

“Unfortunately, it is not a simple matter of the coordination of international players,” Sutherland said.

“The uncertainty of the quarantine requirements for any players coming from across state borders needed to be considered. But the public health considerations, including the uncertainty about lockdowns and living restrictions make it very difficult to plan for an event with any certainty.”

Sutherland said the quarantine issue was likely to remain a barrier for the successful delivery of any national or international golf event at this time.

“Golfers are sole traders, they are not earning anything if they sit in quarantine for a fortnight.”

“We’re not only talking about international players; most of the best Australian players also base themselves overseas during the year.

“Given all the uncertainty at the moment, we want to ensure the safest and best possible experience for the players and fans, and this gives us some time to create that.” 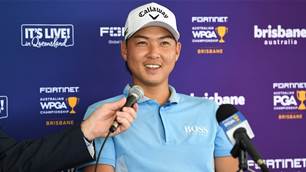