Cameron Percy is three shots off the pace after the first round of The Honda Classic in Florida.

Percy is tied for 11th with 11 other players after shooting one-under-par 69, with Tom Lewis and Harris English grabbing the lead at PGA National.

The Victorian shot two birdies in his opening three holes and notched another on the 18th.

Lewis and English, who are both in the field thanks to sponsor exemptions, each shot four-under 66 in windy conditions at Palm Beach Gardens.

"It's windy out there, you're going to have a lot of cross-winds, and it played really tough," American English said.

"My short game was on point and I made some really good putts."

"My short game was on point and I made some really good putts." – Harris English

Lee Westwood, also in the field thanks to a sponsor exemption, finished on three-under par alongside Zach Johnson, J.T. Poston, Brian Stuard and Cameron Tringale.

Aussies Matt Jones and Cameron Davis are tied in 23rd after registering an even 70, while Greg Chalmers is tied in 120th on five-over par.

Defending champion Keith Mitchell finished birdie-birdie and still shot 75. Rickie Fowler, who won The Honda in 2017 and tied for second with Koepka last year, made one birdie all day and shot 76.

World No.3 Brooks Koepka, in his hometown tournament, made a triple bogey and a double bogey in a four-hole span on the front side on his way to a 74.

"Didn't feel like I played that bad," Koepka said. 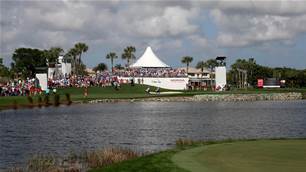