Australian veteran Wade Ormsby has made the early running at the BMW International event after beating jet lag and weariness following a long journey to Munich from the US Open at Torrey Pines.

After finishing 40th at the US Open, the 41-year-old from Adelaide admitted he'd found it difficult with the nine-hour time difference – but he still shot the round of the day, a seven-under par 65, to lead in the clubhouse.

"I was definitely upside down yesterday," Ormsby admitted after his flawless round in the prestigious European Tour event on Thursday which featured seven birdies, five of them in the first nine holes.

"I got a few hours' sleep last night, so I feel much better today but yesterday I thought I was going to be in trouble for the week – but somehow it sorted itself out."

Ormsby was joined at seven-under by Englishman Sam Horsfield, Japan's Masahiro Kawamura and Spain's Sebastian Garcia Rodriguez, who hadn't completed their first rounds when play was suspended due to the threat of lightning.

English crowd favourite Andrew ‘Beef’ Johnston credited a new, carefree attitude after he carded 66 alongside another Australian Min Woo Lee, who had eight birdies and two bogeys in his round of six-under.

Johnston recorded six birdies and no bogeys at Golfclub Munchen Eichenried to finish a shot behind Ormsby.

Eleven months ago, Johnston had walked off the course after just nine holes of the British Masters as he struggled to cope with the European Tour's strict bio-secure bubble and his own high expectations.

The 32-year-old had previously opened up about the mental health struggles that followed his rapid rise to fame, his ready smile, trademark beard and nickname, which made him a fan favourite.

This season also got off to a rough start when Johnston was withdrawn from the Abu Dhabi Championship after being identified as a close contact of someone who had tested positive for COVID-19.

Yet he finished fourth in the Canary Islands and 17th on his return to the British Masters last month.

"It's been interesting, it's been difficult this year," Johnston said.

"It was probably the most I ever prepared for the Middle East events and then I got locked in the room in Abu Dhabi, which made it very difficult and I felt like I had taken two or three steps backwards from there, and that was hard.

"Then after a big break going into the Canary Islands, I was really happy coming out the way I played those four events, finishing at the British Masters.

"Today was a solid round of golf, always a nice feeling to come off bogey-free. I'll take a 66 any day."

US Open runner-up Louis Oosthuizen completed a two-under-par 70 shortly before play was suspended, while Viktor Hovland – who withdrew midway through his second round at Torrey Pines with an eye injury – returned a 68. 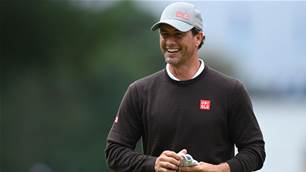