South Korean Byeong Hun An holds the early lead at the Australian Open after posting five-under 67.

The 27-year-old, who is the son of two Olympic table tennis players, managed to overcome difficult playing conditions early this morning, while also avoiding the stronger southerly winds that are currently wreaking havoc at The Lakes Golf Club.

“Overall, it was tricky, I think I got lucky with my tee time today,” An said post-round.

Playing alongside Brendan Steele and Greg Chalmers, An mixed two bogies with five birdies before scoring an eagle with a 25-foot putt at the par-5 8th (his 17th hole).

“I’ve been close this year, I’ve been playing a lot better than last year … I feel like (the win) is coming if I just keep doing what I’m doing,” An said.

Meanwhile, West Australian Matt Jager is the leading Aussie after signing for four-under 68.

The 30-year-old, who won the Australian Amateur in 2010, was one-over after five holes before firing three birdies and an eagle at the par-5 14th.

Yesterday, the New South Welshman said that event organisers should consider scrapping the prize money at next year’s tournament to remind players of the prestige of the Stonehaven Cup. “It was a bit of a passing comment, I suppose, but we need to remember who's playing this week, who's not playing, I think, and remember the championship's bigger than any one player,” Fraser said.

“I would definitely play it if there was no you prize money or if there was a hell of a lot of prize money. So regardless, I think it's one of the best tournaments in the world and hopefully we can continue to help it grow.”

The Sydneysider found the water twice on the opening hole to begin with a quadruple bogey, before doubling the 2nd and bogeying the 3rd.

Earlier, Cameron Smith – who is the highest-ranked Australian in the field – and Brandt Snedeker both struggled in the morning winds, posting 74 and 73 respectively.

Twenty-year-old Japanese player, Takumi Kanaya, is the leading amateur after he carded two-under 70. 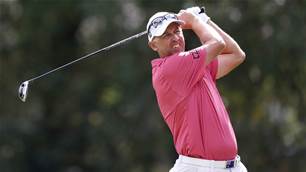