Conor Purcell had a Guinness in hand to kickstart the celebrations of his Australian Amateur Championship triumph.

It was just that nobody was sure whether the jubilant Irishman was in party mode – or just trying to calm his nerves after an epic, nail-biting final against Nathan Barbieri that was decided on the first extra hole.

The match had ebbed and flowed with some largely wonderful golf on the pristine Woodlands layout.

But as entertaining as the combined 17 birdies of a quality final were, the match really came to life in the final hour when Barbieri fought back from four down with 10 holes to play to force an extra hole.

The emerging New South Welshman, who played extra holes in the Round of 32 and won his semi-final after being three down with five to play, again showed incredible pluck. 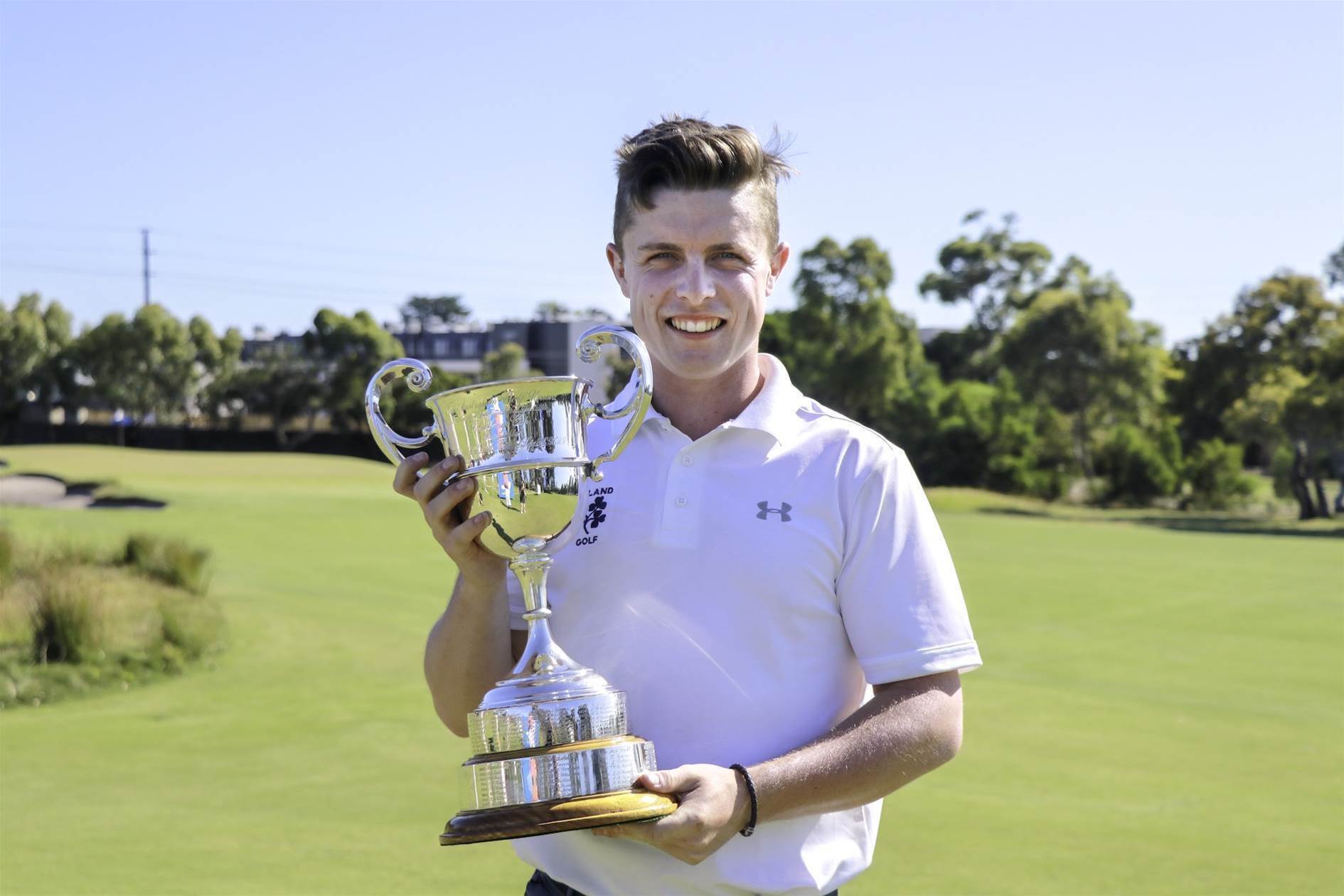 Barbieri’s fight was typified when, still two down as he walked to the 35th, drilled his tee shot to within one and a half metre, then roared as he walked his birdie putt to keep the match alive.

The drama then intensified when, from the right rough, Purcell’s second to the par-five 36th hole raced across the fairway and up the path next to the clubhouse.

Barbieri suddenly had new life when the Irishman couldn’t scramble par and when he pumped his tee shot down the middle of the 37th, looked as though momentum could carry him home.

But he tugged a 122 metre approach left and his subsequent bump shot down the hill past the pin simply wouldn’t stop in time for an easy return par attempt.

Meanwhile, Purcell, with composure regained, lagged his birdie putt to kick-in range and was conceded his par.

Barbieri stood over his putt, ultimately going to the well once too often for even the cliffhanger gods, and blocked his par try narrowly right.

Purcell was politely mobbed by a horde of Irish fans who’d come to watch him play, becoming the country’s first Australian Amateur champion in the tournament’s storied 125-year history.

And as the prize of exemptions into the Australian Open and Vic Open fields – plus the surprise honorary membership later bestowed on him by the host club – became a reality, the humble youngster was still shocked.

“The last few holes were a bit edgy, but to cap it off on the playoff hole was nice,” said Purcell, who had his brother Gary on the bag for the final and later had his trophy presentation played live via Facetime to his parents in Dublin.

“Credit to Nathan, he made a couple of great shots when he needed to today and it was pretty tense that last few minutes.

“Funnily enough I was more nervous on the first tee this morning than I was going down the playoff hole – I felt quite comfortable still because I’d been playing well all week.”

“He had a putt on nine (the 27th hole) to go five up on me and I just fought … as hard as I could. I couldn’t give any more,” an emotional Barbieri said.

“I’m obviously really disappointed, but I’m so proud of myself how I’ve gone this week.”

In the women’s event, Yae Eun (Amy) Hong made it three Korean winners of the Australian Amateur in the past four years, and she did it in style at Woodlands.

Already three-up and playing the 34th hole of a 36-hole final against Japan’s Tsubasa Kajitani, 16-year-old Hong found herself in a difficult spot behind the 16th green. Kajitani, meanwhile, had her ball on the green with a long birdie putt to extend the match.

But Hong, yet another graduate of the incredible South Korean golfing factory, sized up the tricky chip, wedged it into the bank, ran it up on to the green and into the cup for a birdie. 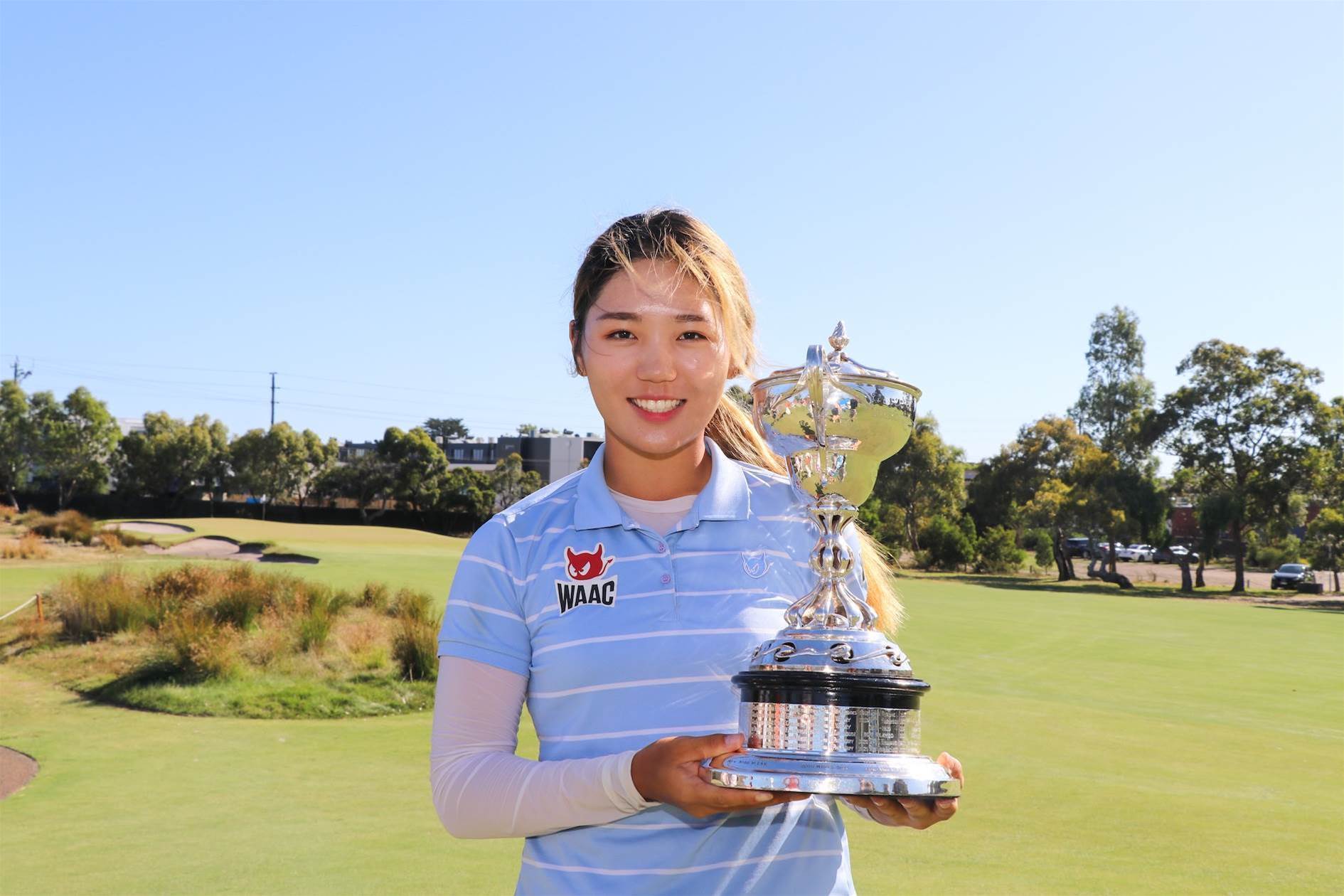 It was game over, just like that. The 3&2 victory was her first in a national championship and just her third anywhere, following two wins in her native country.

Afterward, the teenager from Seoul, admitted that she had only hoped to get her match winning chip close to the pin. “I just thought ‘bogey is okay’,” she said. “It was so hard, and it was my first time playing on these tough greens. I just played it and I thought it was very big, but it just went in the hole.’’

Hong has two years of high school remaining, and came to Australia to play the Amateur and the Master of the Amateurs for the experience. She brought her father Tae-Sik along, and he was on her bag today. A former professional golfer who stopped playing at 19, Tae-Sik Hong was in tears after his daughter’s victory.

Hong wants to turn professional in a few years. Her favourite player, not surprisingly, is the former World No.1 Sung Hyun Park. “I love her,’’ she said. “I met her at a tournament and I always go in the gallery. She’s the best.”

Ranked 178th in the world before today’s win, Hong had to work hard for the win against the 15-year-old Kajitani.

The Korean was up for most of the day and then put the hammer down with a gorgeous, low spinning wedge to the par-five 15th hole, rolling in the birdie from three metres. Kajitani had also hit it close there, but when she missed her downhill birdie putt, Hong was three-up.

The birdie at the 16th gave her the exclamation point. 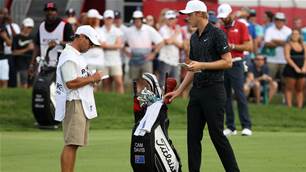 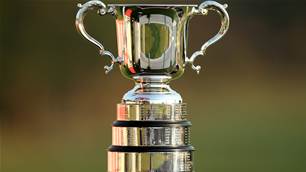