India’s Aditi Ashok agonisingly missed an historic medal in women’s golf at the Olympic Games Tokyo 2020 on Saturday as she was celebrated at home with tributes led by the country’s Prime Minister Narendra Modi and President Ram Nath Kovind.

The 23-year-old Aditi fought bravely throughout the final round at Kasumigaseki Country Club, shooting a closing three-under 68 to finish one shot shy of a podium finish with her 15-under 269 aggregate.

American World No.1 Nelly Korda took gold on 17-under 267 after a 69, with Mone Inami securing Japan’s first ever medal in golf by taking the silver after defeating New Zealand’s Lydia Ko in the first hole of a sudden-death playoff after both tied on 16-under.

All week, Aditi, who had her mother Maheshwari on caddying duties, was a picture of confidence and calm as she courageously stayed in the medal hunt throughout a thrilling final round and had a couple of birdie chances to join the playoff, only to agonisingly miss putts on the 17th and 18th holes. Ashok in action during the final round. PHOTO: AFP via Getty Images.

Soon after play concluded, Indian Prime Minister Narendra Modi tweeted: “Well played @aditigolf! You have shown tremendous skill and resolve during #Tokyo2020. A medal was narrowly missed but you’ve gone farther than any Indian and blazed a trail. Best wishes for your future endeavours.”

India’s President Ram Nath Kovind also posted a congratulatory tweet for the young Indian. “Well played, Aditi Ashok! One more daughter of India makes her mark! You have taken Indian golfing to new heights by today's historic performance. You have played with immense calm and poise. Congratulations for the impressive display of grit and skills.”

Aditi, the lone Indian on the LPGA Tour, was downcast after the final round after being so close to a medal.

“Yeah, 17 was perfect. I hit it exactly the speed I wanted, the line I wanted, I just - maybe I made too many (putts) through the four rounds, golfing gods were like, okay, we're not going to give her this one,” said Aditi, who led the Strokes Gained: Putting category with 13.01 strokes gained over the field throughout the week.

RELATED: The best images from Kasumigaseki

“I just tried my best, even the last hole, although it was really out of range, it was almost a long putt, but I still tried to give it a chance. I think I gave it my best attempt. I mean I wanted to hole it and I gave my best attempt, it's hard to force the issue when you're like 30 feet away.”

An uncharacteristic wayward driver cost her dearly as she hit only five fairways in the final round which stopped her from being more aggressive into the greens. “I didn't really drive the ball very good and then it's hard to get birdie putts or hit greens when you're not in the fairway. That was definitely the hardest part to make a score,” said Aditi, who picked up golf when she was five.

“The front nine I just hit one and I think the back nine I must have hit maybe a couple more, maybe three or four more. So that was bad today, kind of put me out of position so I couldn't get close to the flag.

“I tried my best to like hole the last few putts and just knowing because in a regular tournament whether you finish second or fourth it really doesn't matter, no one cares. But like at this event you need to be in the top 3. I didn't leave anything out there, I think I gave it my hundred percent, but, yeah, fourth at an Olympics where they give out three medals kind of sucks.”

India’s other representative, Diksha Dagar, finished T50 on 6-over 290. She said Aditi’s run was truly inspiring and will encourage young girls to pick up the sport. “It’s been a wonderful experience and I’ll keep working hard to improve,” she said. “Aditi had a very good week and I want to try and follow in her footsteps. This performance will certainly create more awareness for golf as not everybody in India knows about golf.”

Aditi hopes her medal run in Tokyo will put greater spotlight on the game at home, which by the reaction from the country’s leading politicians would have certainly made many sit up and take notice of the sport.

"I didn't leave anything out there, I think I gave it my hundred percent, but, yeah, fourth at an Olympics where they give out three medals kind of sucks.” - Aditi Ashok.

“I think it's good, just even top-5 or top-10 at an Olympics is really good. Because you know that sport or that person has a medal chance. So just having more top finishes, even if it's not exactly a podium finish, will maybe bring eyes to the sport and more support, more kids pick up more, whatever, that helps grow the game,” Aditi said.

“Obviously when I started golf, I never dreamt of being or contending at the Olympics, golf wasn't even an Olympic sport. So sometimes you just pick it up and work hard and have fun every day and sometimes you get here.”

Indeed, Aditi Ashok has arrived at the highest level of women’s golf. 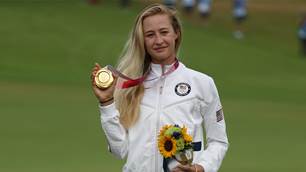 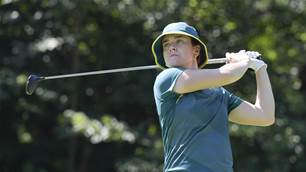