Dutch golfer Anne van Dam has powered home to claim the women's Canberra Classic by three shots after a flawless final round.

After being joint overnight leader with Pogacar, van Dam carded a six-under final round on Sunday to claim her fourth Ladies European Tour (LET) title.

Van Dam put together a bogey-free last 18 holes to fend off challenges from Pogacar and defending champion Jiyai Shin.

South Korean Shin was shaping as a serious threat after entering the final round only two shots off the pace despite an average start to the tournament.

The former World No.1 hit four birdies during the first 12 holes, but slumped on the back nine with two bogeys.

I'm super relieved because it was quite exciting the whole way around and not really knowing the score.” – Anne van Dam

Hannah Green was the best of the Australian continent, finishing in a tie for eighth at seven under.

Despite the challenge from Shin, who was gunning for her third win in as many starts at Royal Canberra, World No.81 van Dam said she kept her cool and trusted her game.

"Right now, I'm super relieved because it was quite exciting the whole way around and not really knowing the score," van Dam said.

"After (Saturday), even though I shot an eight-under-par, I still knew I had some shots in there and I just tried to think about that."

Van Dam had to do it the hard way during a month in Australia after her luggage was lost in transit.

She missed the cut at the Victorian Open before coming into form at last week's Australian Ladies Classic at Bonville, where she finished in a tie for 16th.

It was a breakout tournament for Pogacar – the first woman from Slovenia to qualify for the LET. 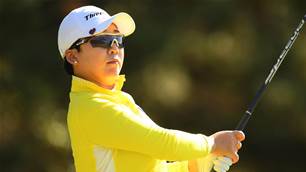