An angry Brooks Koepka has questioned whether he was deliberately buffeted by spectators when officials lost control of the gallery at the final hole of the PGA Championship.

After Koepka and record-breaking champion Phil Mickelson had played their shots to the final green, hundreds if not thousands of spectators swarmed the fairway in scenes reminiscent of Open Championships of a previous era.

Mickelson was shepherded through the heaving masses by a few police and marshals, and soon emerged into a protected area near the green, but it was some time before Koepka emerged to sanctuary.

Koepka, who is recovering from a dislocated kneecap, seems to have been collateral damage, and was left wondering if some of the bumps may even have been deliberate.

"It would have been cool if I didn't have a knee injury and got dinged a few times in the knee in that crowd because no-one really gave a shit, personally," he said.

"If I was fine, yeah, it would have been cool. It's cool for Phil but getting dinged a few times isn't exactly my idea of fun.

"I don't mind waiting or being in that crowd. I don't know, it felt like somebody tried to, I don't know what the deal was. Be putting (the knee) in ice (tonight). It feels like shit right now."

Koepka already has four major victories and claiming a fifth on a dodgy knee would have been perhaps the most impressive yet.

But second place hurt, though maybe not as much as his knee.

"It got bumped a few times," he said.

"But I don't know what someone tried to (do) or what the deal was. There were so many people around." 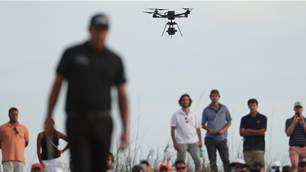 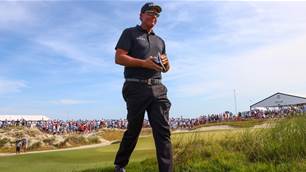 Australia's historic winning streak is over