Adam Scott says he wants to win at least another six times on the PGA Tour before he retires, as he prepares to defend his most recent title at Riviera Country Club this week.

The former World No.1 has won 14 times since joining the lucrative US circuit in 2003. But the 40-year-old is eager to leapfrog Jim Ferrier (18 wins) and join Greg Norman in becoming the only Australians with 20 titles.

“I think it's a bit of a milestone for the PGA Tour. If I'm not mistaken it's kind of that lifetime membership if you hit 20 wins,” Scott said ahead of The Genesis Invitational.

“I think I can over the next five years. I can win another 10‑plus tournaments as long as I'm still physically in good shape. But that's a commitment to do that. I'd like to push on hard and I'd really like to see myself get on a bit of a roll at some point in the next couple years and rack up some wins.

“I've watched a lot of guys do it over the past or five or six years, like Brooks (Koepka) or Dustin (Johnson), who consistently wins, but thinking back to Jason Day, he won nine times in 18 months maybe. So I'm looking to try to work my game into that kind of form. I see all the areas at times good enough, I just have to put it all together.”

“I can win another 10‑plus tournaments as long as I'm still physically in good shape. But that's a commitment to do that. I'd like to push on hard and I'd really like to see myself get on a bit of a roll at some point in the next couple years and rack up some wins.” – Adam Scott

Scott, who famously broke Australia’s duck at Augusta to win the Masters in 2013, has only played 12 events since the PGA Tour returned from its three-month coronavirus-enforced hiatus last March.

But the Queenslander hasn’t missed any weekend action since he returned to the US – after spending three months at home in Australia – and shared 10th place in his most recent start at Torrey Pines at the end of January.

Scott defeated South Korean Sung Kang by two shots at Riviera last year and has something of an affinity with the historic course, having also won this event back in 2005 (unofficially because it was reduced to 36 holes due to rain).

“I love this place here at Riviera,” Scott said.

Scott, who has entered the 21st year of his professional career, will begin his title defence from the 10th tee at 7:24am (2:24am AEDT) tomorrow.

“I'm very confident that I've got quite a few wins left in me, but also I'm aware I'd like to do that at a pretty quick fashion,” Scott said.

“If I'm to achieve really what I want out of my career, I'm going to have to do that because it's not easy to win out here and time is working against me a little bit, even though I feel like I'm in a good spot.” 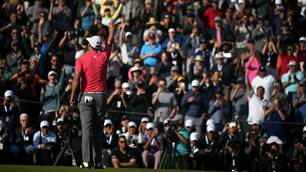 The Preview: The Genesis Invitational