The Presidents Cup reacquainted the golfing world with the majesty of Royal Melbourne Golf Club. But what lies ahead for the famed Dr Alister MacKenzie layout?

Tiger Woods and his all-star Americans might have lured the masses, but the real star of the Presidents Cup was the course.

The plaudits for the Royal Melbourne Presidents Cup Composite Course were loud and widespread from the players and captains, to the media and gathered galleries. The greatest aspects of Australia’s premier course had been showcased to the golfing world and the golfing world loved it.

“Royal Melbourne is not one of the longer golf courses we play, but it is tricky. And when it gets fast and if we get hot weather, we get the northerlies coming in there, it can get quick, like it was in 2011,” Woods said.

“Here, you can have a sand wedge in your hand and you can’t fire at a flag, you have to fire 15 or 20 feet away because honestly you can’t get it close. And that’s where it’s fun for us to play that type of golf. It’s unique. It’s very different. It’s a combination of playing links golf and Augusta National all in one.” A common point made by players about Royal Melbourne was: “The flag is not the target … it’s the destination,” which is the polar opposite of the usual darts golf played on soft playing surfaces week-in, week-out on the PGA Tour.

The Composite layout – with 12 holes from the West Course designed by Alister MacKenzie and six from the East Course created by his design associate Alex Russell – is widely regarded as one of the world’s best layouts. In fact, Royal Melbourne is a national treasure … Australian golf’s equivalent of the Sydney Opera House.

It would be a crying shame, now that the grandstands have been dismantled and all the crowds are gone, that Australia’s finest tournament course returned to being just the best course in the country for the next decade or so. It would be like the Opera House only hosting amateur theatre productions or the Melbourne Cricket Ground being passed over for the Boxing Day Test.

The PGA Tour hierarchy certainly love the Melbourne Sandbelt and, in particular, Royal Melbourne. Not only is the course, and the golf it produces, absolutely world class, but it offers the big US television markets prime time viewing. Not surprisingly, ratings records were smashed during the recent Presidents Cup. So when will we see the Cup, or any major golfing event, back at Royal Melbourne?

“It would be a crying shame, now that the grandstands have been dismantled and all the crowds are gone, that Australia’s finest tournament course returned to being just the best course in the country for the next decade or so.”

A fourth Presidents Cup, while not out of the question, is unlikely to return to Melbourne for at least a decade. The Cup will be played in the United States in 2021 at Quail Hollow, North Carolina, and in 2025 at San Francisco’s TPC Harding Park.

No announcement has been made for the international venue in 2023, but Japan is the short-priced favourite to be the host nation, which would make sense given the PGA Tour now has a permanent office established in Tokyo. A return to South Africa is also not out of the question, either in 2023 or 2025. Canada may figure again in future years, as might a South American country. Keeping this in mind, 2031 might be the first opportunity that arises for Royal Melbourne to once again play host.

So what about the PGA Tour’s other big gold trophy – The World Cup of Golf? Australia has been the unofficial home of that event since 2013 with Royal Melbourne (2013), Kingston Heath (2016) and Metropolitan (2018) all hosting the Cup. Again, Royal Melbourne hosting the World Cup would be terrific but the PGA Tour hasn’t even announced 2020 or 2021 dates, let alone a venue. It is highly unlikely the PGA Tour will venture down the path of taking one of its World Golf Championships to the southern hemisphere, let alone Royal Melbourne, simply because of the scheduling and travel time issues that raises. They certainly wouldn’t want a repeat of 2001 when nearly 40 of the world’s top-64 golfers – including six of the top-10 – decided to bypass the then named Accenture World Match Play at Metropolitan because of the travel so early in the New Year.

Royal Melbourne’s next chance on the world stage is likely to be via one of the bigger events left on the PGA Tour of Australasia schedule. The Australian Open will be played in the Sandbelt later this year at Kingston Heath and will return again in 2023 to Victoria Golf Club. No announcement on dates and venues has been made beyond that year but it wouldn’t surprise if the most prestigious title in Australian golf found its way back to the Alister MacKenzie-designed, Mick Morcom-built Royal Melbourne. 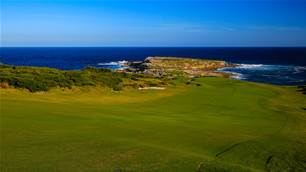