Some of the game’s best players yet to win a major will be hoping recent history repeats this week at St Louis’ Bellerive Country Club, home of the 100th U.S PGA Championship.

Winning major championships is not easy. When each of golf’s four Grand Slam events rolls around, the pundits run their fingers across the form guide and make their predictions.

Usually it will be a highly-ranked player – one within the top-20 at the very least – and, more often than not, they will have already claimed a major win already. Think about it. There will be a throng of analysts and experts asked to give their tip to win this week and you can guarantee the likes of Dustin Johnson, Rory McIlroy, Jason Day, Brooks Koepka, defending champion Justin Thomas and even Tiger Woods will be among those names bandied about.

But singling out contenders to hoist the Wanamaker Trophy is like trying to pick the winner of the Melbourne Cup. The PGA boasts such a strong field (the strongest of any of the four majors) that the winner just might come from those ranked outside the top-50 in the world. This year’s PGA Champion might even be a newcomer to the major winning caper.

If recent history is to repeat this week, here are the five most likely contenders to be kissing the biggest piece of silverware in golf on Sunday evening. The expectation is that Jon Rahm will win a major sooner, rather than later. PHOTO: Getty Images.

The 23-year-old is playing in just his 10th major and second US PGA Championship, after finishing T58 at Quail Hollow last year.

Ranked No.5 in the world, the expectation is that Rahm will win a major sooner, rather than later. But he missed the cut at the US Open and The Open, where a handful of loose shots were compounded by the Spaniard losing his cool.

If Rahm can harness his temperament, and be happy to leave his driver in the bag, he will go a long way to putting himself in the picture on Sunday afternoon. Four years on from his ‘Grand Slam’ of Top-5 finishes in each of the year’s four major championships, Rickie Fowler is still yet to win his maiden major title.

Eight of his nine top-10s in 35 major tournament starts have been T5 or better, which suggests the 29-year-old has no problem working his way into contention in the big events.

Fowler is a quality ball-striker who will be well-suited to Bellerive and its cambering dogleg fairways. If momentum goes his way over the opening two rounds, look out. We already know how tough Tony Finau is, after he dislocated his ankle on the eve of this year’s Masters and then played out the four days of the tournament to finish T10. He has also banked Top-10 results at the US Open and The Open this year.

Could this week really be big Tony’s week?

The 28-year-old was very good at Firestone (another Top-10) and, unlike others chasing their maiden major, his cool temperament is as much of a weapon as his driver.

Finau, the No.29 in the world, is not just one of the biggest hitters on Tour (ranked No.3 for driving distance at 316.9 yards) he knows how to get his ball in the hole in a hurry. His scoring average of 69.775 is the lowest of his PGA Tour career. Xander Schauffele is the reigning Rookie of the Year on the PGA Tour. PHOTO: Getty Images.

For someone who has been a touring professional for just three years, Xander Schauffele’s resume makes impressive reading.

His victory in the Tour Championship last year sealed Rookie of the Year honours but it’s his T6 at the US Open and T2 at The Open in recent months that has grabbed this writer’s attention.

For a smaller guy, he packs plenty of punch from the tee – just like Justin Thomas – which is something this week’s winner will possess.

Bellerive is a long-bomber’s golf course and Schauffele has already proven he can hit it as high and long as anyone in that class. But he also has very soft hands, where it counts around the green, which was clearly evident at Carnoustie. For someone who hails from the sometimes very cool climes of Warrnambool in Victoria, Marc Leishman likes the heat.

He’s won in South Africa, Texas and, of course, Bay Hill in Florida. He even lives in the Carolinas. With this week’s PGA being played at a hot and muggy Bellerive in Missouri, Leishman will feel quite at home.

The course is also likely to suit Leishman’s eye, despite playing 6,900 metres from the tips. Of the 14 par-4s and par-5s that make up the par-70 layout, only one hole turns left-to-right, which doesn’t suit Leishman’s fade. However, if the 34-year-old can find his way onto the fairways, his left-to-right shape with the irons will hold him in good stead for his approaches.

Lastly, nothing brings out the best in Leishman more than a big stage. 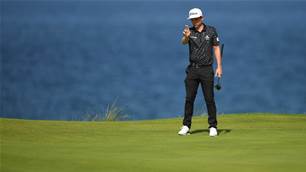