AN opening bogey and tricky ‘Freo Doctor’ winds could not stop American Peter Uihlein shooting a superb seven under 65 to seize the first round lead of the ISPS Handa Perth International.

A BOGEY at the opening hole and tricky ‘Freo Doctor’ wind gusts could not stop American Peter Uihlein shooting a superb seven under 65 to seize the first round lead of the ISPS Handa Perth International.

The 26-year-old recovered in the best possible way from his fumbling start by extracting six birdies and an eagle from the Lake Karrinyup layout over the next 17 holes. 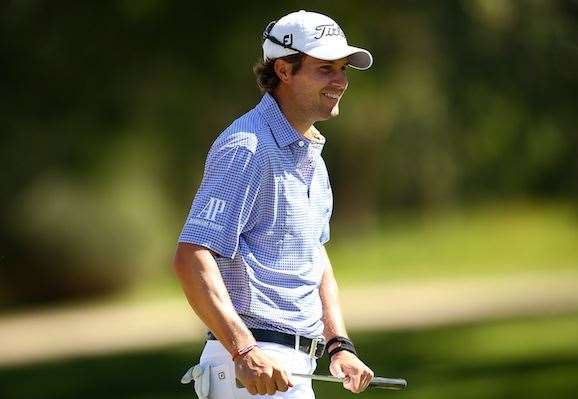 Starting on the short downhill par-4 1st hole, Uihlein opted for an iron from the tee and missed the fairway. After getting a flyer from the rough, he then bounced a chip shot through a bunker and missed his par saver. His start could have been in even worse had he not holed a 25-footer to save his par at the next.

“I was really staring at 6 or 7 in the face (at the 1st) and I was pretty pleased to walk off with a 5,” Uihlein said. “Felt like a birdie in my mind, so I wasn't really too opposed with it.

“Made a nice par on the next hole, which really helped. I think I made about a 25-footer for par and after that, I think I just kind of calmed down a little bit and it was a little bit more smooth sailing from there.”

FIRST ROUND LEADERBOARD  |  ROUND 2 TEE TIMES

His eagle at the short but steep uphill par-4 9th hole was a definite highlight. Faced with a 50-metre pitch over a cavernous bunker, Uihlein hit the perfect shot and watched as the ball bounced once and disappeared straight into the bottom of the hole.

“It was a good number, just a nice little pitch where I felt like I was just trying to carry it 55 or so, one-hop and skip it up there,” Uihlein smiled. “I heard it hit the flag and before people kind of stood up and started applauding.

“It's always cool to see the reaction, one of those cool moments.” 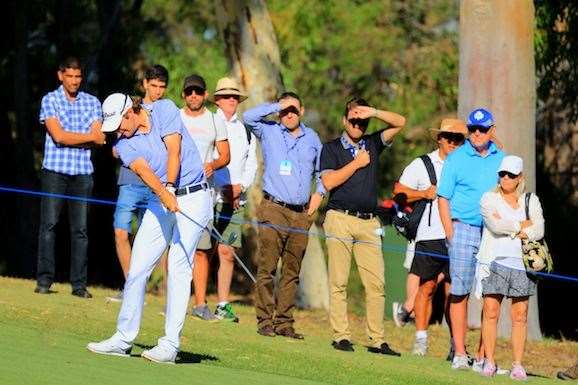 Uihlein keeps his approach under the wind on the 18th hole.
PHOTO: Brendan James/Golf Australia magazine

On an afternoon where the ‘Freo Doctor’ winds gusted up to 30km an hour, Uihlein was superb in controlling his ball.

“I don't really mind the wind. I think I'm like everybody elsewhere, we like it dead calm, but I'm not really opposed to it if it is windy.

And he obviously loves the greens. The former US Amateur champion had just 26 putts for his round and says he’s a big fan of the quick undulating surfaces of the Lake Karrinyup course.

Uihlein leads by one stroke from Frenchman Romain Wattel and India’s Shiv Kapur, who is battling with a shoulder injury he sustained picking his golf bag up off an airport carousel in Singapore three weeks ago. 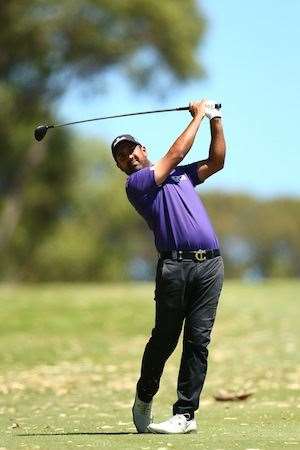 He struggled through his pre-round warm-up and required a chiropractor to work on his right shoulder before starting his round.

“It's funny how you go in the gym and you play golf and you do all these things and you don't get injured, and the littlest thing happens when you travel,” he said. “We obviously load our golf bags up with a lot of stuff.

“The shoulder got better as I warmed up, but the first few shots that I hit, I couldn't really hold the club at the top of my backswing.

“The sort of attitude I had, it's been going on for a couple of weeks now, so it's been a bit frustrating for me. Even last week, I played terribly in the first round, but I just said, ‘I'm going to play through it.’ If you sign up to play a tournament, you want to give it your best until you can really not swing.”

Kapur’s round was flawless and he figures the lack of expectation combined with swinging within himself to protect his injured shoulder might the recipe for good scoring.

“Sometimes when you drop the expectations and you don't really think about a golf swing, you're just trying to get it around and play one shot at a time, the old cliché in golf, it seems to work pretty well,” Kapur smiled.

Rhein Gibson is the leading Australian after the first round. The PGA Tour player birdied his final hole to grab sole possession of fourth place at five under.

The 30-year-old New South Welshman had five birdies and an eagle in his round, played during the toughest of the wind gusts. Like Uihlein, he found the slick bentgrass putting surfaces to his liking, rolling in 26 putts for the round. 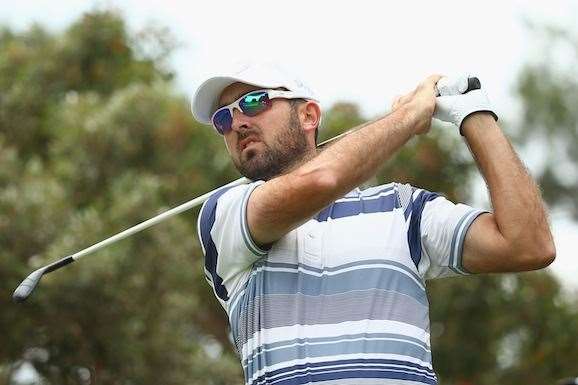 Rhein Gibson is the best of the Australians after his 67.
PHOTO: Getty Images.

Tournament favourite Louis Oosthuizen was near perfect from tee to green but couldn’t buy a putt during his two under 70. The South African, who was out early in the day when the greens were at their most receptive, missed just one fairway and one green during the round.

Despite leaving himself in the “wrong spots” on some of the greens, the 33-year-old plans to continue with his aggressive strategy of using his driver wherever possible.

“I like playing here. I like to take it on with the driver and give yourself short clubs in,” the 2010 Open Champion said. “I'm hitting my driver pretty good at the moment. I enjoy the golf course. I just need to think a bit better around it. I left myself with a few shockers to try and make birdies.

“I couldn't really go for any putts for birdies. I had to think of speed the whole time, and just get it close. So, it's a bit unfortunate. I need to think a bit better around that front nine to leave myself with a few uphill putts.”

The forecast for the second round is wind gusts in the morning before it changes direction and drops in the afternoon, which will play into the hands of the players who also had the best of the conditions on day one.