There was some great viewing for golf fans across the various Tours. But the weekend’s action also saw one of the game’s biggest issues rear its ugly head once again.

At times, assisted in gaining prominence by eventual winner Stacy Lewis’ comments, the pace of play at the Ladies Scottish Open was glacial.

“The pace of play is dreadfully slow, and that doesn't play into my favour. People I'm playing with are pretty slow,” the American said after the third round where she was alongside Jennifer Song and Azahara Munoz.

“So that's honestly going to be my biggest challenge is to figure out with that pace of play how I can get into a good rhythm and how to keep myself in a rhythm of playing golf and not feeling like you're waiting so long in between holes and shots and different things.”

Lewis managed to overcome that challenge, whilst playing with the same pair on Sunday no less, but was backed up by the vocal world of golf Twitter and plenty of column space since.

There are some serious slow play shenanigans going on @lpga event in the final group - it’s pretty obvious which players are slow. Disappointing to watch. #pickupthepace #hurryup

However, while the discussion raged about the influence of yardage books, caddies, sports psychologists and their respective roles in slowing the game down at the top level it is important to remember the optics of LPGA contributes to perhaps highlighting an issue that is rife throughout the game, both in the world of entertainment that is professional golf and the hobby of amateur golf.

Some of the key players at this past week’s US Amateur, a magnificent showcase of one of golf’s great modern venues at Bandon Dunes, resembled more tortoise than hare. A concerning fact, due to these players by and large being the future of professional golf.

"There are smaller production crews, meaning less cameras and thus less recorded shots to fill the gaps between those of the leading groups over the weekend. The result, an increase of air time and scrutiny for the pace of play."

The PGA Tour is known for five-hour rounds and players like Bryson DeChambeau and even our own Jason Day, who are so committed to their ‘process’ it feels at times as though they could be measured not with a clock but a calendar.

However, the LPGA Tour is ripe to be targeted as the standout member of the class for slow play due to a number of factors that have little to do with the speed the players actually get around the course.

Due to no fans currently being allowed to attend golf tournaments, all the comments on slow play came from those watching on television at home. And when it comes to the LPGA this is a completely different beast to the PGA Tour.

There are less advertisers supporting the premier women’s Tour, meaning less required ad breaks that are likely to be shorter when taken in any case.

There are smaller production crews, meaning less cameras and thus less recorded shots to fill the gaps between those of the leading groups over the weekend. The result, an increase of air time and scrutiny for the pace of play.

So while the pace of some in the field at the Ladies Scottish Open was deplorable and rightly called out by Lewis and her compatriot Christina Kim on Twitter gave some of the best instruction for playing at the right pace in some time, it is necessary to remember that the LPGA Tour and its players should not be the target of more scorn than any others.

Not playing fast enough. Not gathering your information BEFORE you get to the ball. Not giving a shit about the game enough to do your part. Not respecting your playing partners. Pretty simple. https://t.co/4nNYeTDd32

Yes there are LPGA players that require prompting to speed up or face the consequences. And the days gone by of caddie lining up was a blight on the circuit. But golfers the world over are slower than needs be.

Professional events have an understandable trickledown effect in the game and need to be leaders in this.

But similarly the golfer who is never ready to hit when it is their turn, or spends more time snapping iPhone pictures on each tee than preparing to play their shot, needs to be encouraged to speed up.

Lewis is playing her part.

But just because some of the LPGA membership are rightly speaking out on a topic so many of their counterparts seem to have accepted as the norm (and other Tours’ productions do a better job of hiding) shouldn’t allow for the issue to be criticised as more a part of their Tour than any other.

Perhaps Lewis, who admitted to singing along to Taylor Swift last week, might be better served to introduce her fellow players to 1970s rock band Trooper and their lyrics “We're here for a good time, not a long time”.

A catchy few lines golf as a whole could benefit from following. 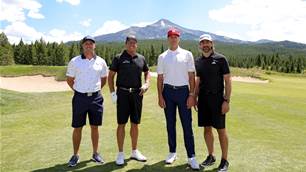 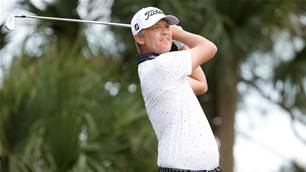 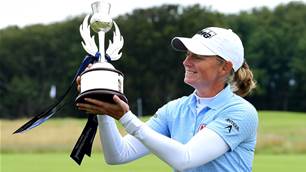