There has been plenty of talk since Bryson DeChambeau’s maiden major win about how the American is changing the game.

Much has been said and written about how the bulked-up Bryson destroyed the notion that to win a US Open one must hit fairways rather than employ a bomb and gouge approach.

But far less attention has been given to the transformation of DeChambeau on the greens since adopting an armlock method of putting, that has similarly redirected the career path of fellow US Open champion and top-10 player in the world Webb Simpson.

Amongst his comments after the final round, that some took as sour grapes, Rory McIlroy touched on the putting method used by DeChambeau when asked about his transformation.

“I think it's brilliant, but I think he's taken advantage of where the game is at the minute. Look, again, whether that's good or bad, but it's just the way it is. With the way he approaches it, with the arm-lock putting, with everything, it's just where the game's at right now,” McIlroy said.

“I'm not saying that's right or wrong. He's just taking advantage of what we have right now.” McIroy is of course right. Nothing about DeChambeau’s new approach to the game is against the rules. However, when looking at specifically the putting method, and its influence on his, Simpson's and Matt Kuchar’s success, one must ponder whether the technique might similarly face scrutiny from the game’s rule makers in the same way that long and belly putters did before being banned in 2016.

RIGHT: Bryson has already had a legal issue with one putting method, his side saddle technique from 2017 causing a heated argument with the USGA. PHOTO: Jeff Gross/Getty Images.

Simpson was one of four anchored-putter users alongside Keegan Bradley, Ernie Els and Adam Scott who won majors within 18 months of each other, causing what could only be described as a reactionary rule to putting methods that had long been utilised but had yet to see success on the game’s biggest stage.

No matter where you find yourself on the anchoring ban (in the interest of transparency, I am against and still to this day use an unanchored long putter), there is no questioning that the USGA and R&A saw two unorthodox methods as a threat to what they considered a golf stroke.

Armlock putting, like belly putters and the broomstick, has been around for a long time. Bernhard Langer famously used it to save his career from the yips, and Matt Kuchar became the modern face of the style, having used it for nearly a decade and won a Players Championship.

But the recent run of success of formerly below average to poor putters surely will come in for attention from these same rule making bodies if they are consistent.

"... Whether that's good or bad, but it's just the way it is. With the way he approaches it, with the arm-lock putting, with everything, it's just where the game's at right now." - Rory McIlroy.

The argument for arm-locking is the lack of a locked-in fulcrum point.

However, one needs only to search the internet to find pieces quoting DeChambeau on his method as turning his lead arm completely outward to limit movement and variables and essentially lock in a position.

He also uses an extremely upright putter and makes a putting stroke golfers of yesteryear would struggle to recognise as a traditional stroke.

Having personally tried this method, I can stand witness to its improvement albeit on a lesser scale than the aforementioned players.

Simpson has added a second Players Championship for the style and returned to be a top-10 player in the world after looking to have been lost to mediocrity after benching his belly putter.

In the 2015 and 2016 PGA Tour seasons, the American ranked outside the top-170 players on Tour for Strokes Gained: Putting – a category he has ranked inside the top-15 on Tour for the last three years when he has been one of the most consistent players in world golf.

"With the USGA and R&A's history of being reactive rather than proactive, one wouldn’t be surprised to see another putting style come under the microscope."

DeChambeau did have success as an amateur with a short putter, before he earnt a full time place on the PGA Tour where his putting stats were a clear barrier to success.

The 27-year-old would have ranked outside the top-140 for SG: Putting had he completed enough rounds in 2016 and did so in the 2017 season – a period of struggles so significant he turned to side saddle putting before a battle with the USGA over his method and putter’s legality.

Since making the switch, DeChambeau has ranked on the better side of 40th each season, including a three-win year in 2018 and his recent run of stellar play that saw him rank 10th for the 2019/20 season.

As is the case with DeChambeau’s body transformation and swing changes resulting in substantial power, it is all within the current rules of the game and he is one of, if not the, hardest working players on Tour.

However, with the USGA and R&A's history of being reactive rather than proactive, one wouldn’t be surprised to see another putting style come under the microscope.

From the sounds of things, that wouldn’t be a bad call from Rory McIlroy’s perspective, so Bryson and Webb might want to cash in now. 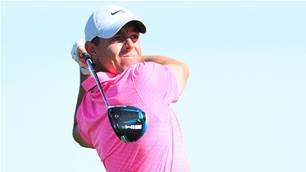