We’ve all been experiencing strange times over the last three months. But not being able to play golf for a while and living almost exclusively at home has been especially odd for a seasoned traveller like me.

I actually just beat the lockdown regulations when I flew home from New Zealand, where I had been playing in the Tara Iti member-guest. It’s an incredible course, by the way. I’d heard so many wonderful things about it before I went, but Tom Doak’s design exceeded even my most elevated expectations. It’s a legitimately great links course built on pure sand.

Anyway, I arrived back in Melbourne 12 hours before Australia’s 14-day quarantine rules came into effect. So I was lucky. It wasn’t long before golf tournaments started to get cancelled and courses started closing. The whole world shut down. It was crazy. At first, of course, it all seemed like a mind-blowing over-reaction. But every day that passed only strengthened the notion that it was actually an under-reaction. Like everyone else, I soon realised we can’t stop the spread of this awful virus fast enough.

One of the few positive aspects of all we have been through is that the whole world has been brought closer together. And that certainly seemed to be the case within golf. The leading pros all had pretty much the same reaction. It wasn’t long before they were hitting balls into nets in their garages and offering swing tips over social media. I was one of those who bought a net. And I’ve been hitting balls in the garage too.

All in all, it has been such a strange situation. Frustrating too. For maybe the first time in our lives we didn’t have to go to work or school. But we couldn’t play golf either. We didn’t have to do anything. But we weren’t allowed to do what we most wanted to do. Bizarre really.

I’ve always been a big reader of what the golf media puts out on a daily, weekly and monthly basis. But I’ve gone overboard recently. I’ve read all of it. In a world where nothing much was happening, there was a lot going on. If you know what I mean. Majors were getting postponed and cancelled. And there was a seemingly endless list of implications and questions for the game in general. How was this all going to work? Which I found quite interesting.

“At first, of course, it all seemed like a mind-blowing over-reaction. But every day that passed only strengthened the notion that it was actually an under-reaction.” – Geoff Ogilvy

In the pro game things quickly get complicated if a year isn’t really a year. Every 12 months we have promotions and relegation based on what has happened during the previous season. Guys are losing and gaining Tour cards every year. But that isn’t going to happen in 2020. We are entering a weird period of limbo. I’d hate, for example, to be a young American who has just turned pro with aspirations to be on Tour in 2021. That isn’t going to happen, no matter how well or badly they all play. It’s just not possible.

I think I speak for all of us though, when I say that golf has really been missed over the last few months. So when we eventually emerge back into normality, the game will surely be more appreciated than it was before. That can only be a nice thing. I hear from places like Scotland that clubs have actually gained memberships as the courses re-opened, which is brilliant. And further illustrates how we have taken some of the good things in life – like golf – for granted. Only when it was taken away did we all realise how much we miss it. It’s a pleasure to play the game – not a chore.

All of which has made me smile. So many Tour professionals are generally pretty grumpy about golf. It’s just the nature of something you do every day. The typical weekend golfer, of course, finds that hard to understand. All he or she wants to do is get out there and play every day.

Still, I have to think this enforced break has been good for many Tour players. So many of them have a hard time letting go of the game. They have long needed a proper break. These last couple of months will have done wonders for the general level of mental health amongst this elite group. They haven’t had scores to worry about for three months. It wouldn’t surprise me if the standard of play on the PGA Tour actually goes up, now that they are back out there.

Those philosophical benefits will also be replicated on the practical side of the game. No rakes in bunkers is good. Indeed, at the club where I’ve been playing a bit lately – Peninsula Kingswood – we have been playing preferred lies in the sand. It’s ‘move the ball to a decent spot and play on.’ That speeds up play unbelievably, as does leaving the pin in. Not dealing with pins and rakes saves so much time. The game just flows better.

In fact, when it comes to rakes, I wouldn’t be averse to everyone smoothing out the sand with their feet. I do that all the time when I’m in a practice bunker. And it works well enough. So this could be an opportunity to create a new ‘etiquette.’ Get rid of rakes. Use your feet instead.

“Only when it was taken away did we all realise how much we miss it. It’s a pleasure to play the game – not a chore.” – Geoff Ogilvy

One other thing I’ve noticed since golf has come back is what a good job greens staffs have been doing, even with skeleton crews during the break. At Peninsula, there were no pitch marks on the greens, no divots on the fairways and the range was immaculate. Which made me think that, in an ideal world, golf courses need a bit of room to breathe. Many clubs would do well to give their superintendent one day a week where there is no play, or at least a reduced level. That works well enough at St. Andrews. Every Sunday, no one is allowed to play the Old Course.

The bottom line, however, is that I missed playing golf. I was just starting to play decently when I got back from New Zealand in March. I was thinking about playing a bit overseas. I was motivated to play and compete. But that disappeared almost immediately. I know that was true of a lot of guys. We were waking up in the morning, having breakfast and wondering what we were going to do. At which point I was back on my phone or my computer.

That’s nice for a short time. But only a short time. When you are really trying to get good at something, you need incentives. But with no tournaments to play in, that was gone. I was like a journalist with a piece to write – but no deadline. I needed something to prepare for, something I could aim at.

At first, as I said, I found myself hitting balls in my net. That was fun. I enjoy hitting shots. But it soon got old, especially when I couldn’t see where the ball was going. Besides, I couldn’t see the point. There was no end to what I was doing. I missed the reason why I was working on my game. No motivation is a crappy feeling. It was weird not caring whether I went to the course or not. And not a nice feeling.

On the other hand, when things started happening again, all the old feelings came back. I want to play. I love the game, not just hitting shots. I love being around my friends on the course. I missed that. Golf is a better game when you are playing with your mates. And I appreciate it more now than I did before. I’m sure you all feel the same. 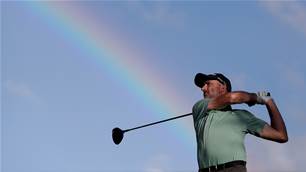