The year might be new but the arguments in golf are old and one of the most archaic raised its ugly head before 2022 was even 48 hours old.

At lunchtime on January 2, Melbourne based PGA Professional Sandy Jamieson tweeted a photo that should have met with universal disdain.

Taken at an unidentified public course in his home city, the photo showed an information board noting three sets of tees on the course.

There was blue for ‘Advanced’, white for ‘Beginners’ and red, for ‘Ladies’. As Sandy noted in his comment alongside the photo, was the inference here that women can’t be advanced golfers?

(If anybody truly does think this, they have zero understanding about golf and can be safely ignored on any and all matters to do with the game.)

The notion of ‘Ladies’ tees is about as outdated as sending children down coal mines and yet, somehow, signs like the one Sandy highlighted are not uncommon. Even in 2022.

Perhaps more concerning, though, is the attitude of some golfers to this sort of signposting.

While it may be possible to find a modicum of sympathy for a resource poor facility yet to correct an historical mistake, it is much more difficult to forgive adults who not only don’t see an issue but actively defend the existence of such nonsense.

To those people I have a simple method of determining if the stereotyping being employed is reasonable.

Try swapping the word ‘ladies’ with ‘Asian’ or ‘gay’ and see how the sentence sounds.

Would anybody in 2022 seriously suggest it ok to have a set of ‘gay’ or ‘Asian’ tees on a golf course?

One sincerely hopes the answer to that is no and yet, for many, the notion of ‘Ladies’ tees is not only acceptable but to be defended.

"While it may be possible to find a modicum of sympathy for a resource poor facility yet to correct an historical mistake, it is much more difficult to forgive adults who not only don’t see an issue but actively defend the existence of such nonsense." - Rod Morri.

Defining tees along gender lines does nothing to enhance the game but plenty to divide it.

Ridding the game of such nonsense would have zero negative impact on anybody’s experience yet go a long way to making the game feel – and be – more inclusive.

The statistics around the number of women playing golf are less than impressive and the attitudes which think Ladies tees are OK have had their part to play in that.

The sooner the whole concept is consigned to the dustbin of history the better for all concerned. 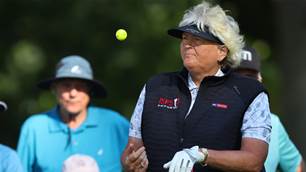