There’s long been a belief (this writer included) that professional golf does itself – and the game more broadly – no favours with its relentless, year-long schedule.

Between the PGA, European and LPGA Tours and their associated secondary circuits down to the more localised Asian, Japan and Sunshine Tours, there is barely a week of any calendar year that does not feature a golf tournament.

Other sports take a break and give their fans a chance to miss the game but golf never does and one can’t help but wonder if that is ultimately to the good of the game?

Now, thanks to the Covid-19 pandemic, golfers are being given a chance to find out what an off season might look and feel like and the response has been interesting to say the least.

For the most part, golfers seem more concerned – certainly more vocal – about their own ability to get on course than missing the opportunity to crown a winner at the Wells Fargo.

While football fans eagerly await the outcome of various league attempts to get the professional game back in action, golfers seem less concerned with when the China Open might be rescheduled than when courses in Victoria might start allowing play.

"A crisis such as that brought on by this pandemic is often a catalyst for change and for a game that has become used to excess that won’t necessarily be a bad thing."

It’s going on six weeks since a shot was struck at the top levels of professional golf and, even if all goes according to plan in the US, it will be at least another seven before tournament golf returns.

That is a big shock and a major concern for those whose livelihoods depend on the tournament game (a group much bigger than just players, it must be remembered).

But of greater concern than the large and growing financial cost of no tournament play is the seemingly lukewarm response of the game’s rusted on fan base.

While the week of the postponed Masters was awash with coverage on social media there has been barely a whisper about missing the Zurich Classic of New Orleans.

There is an undeniable connection between professional golf and what happens at grass roots level and it is a double-sided coin.

Individual players and their heroic deeds – the likes of Tiger Woods and Karrie Webb – entertain, inspire and draw people to the game.

But the bigger machines those individual players are a part of often have a less healthy impact further down the golf food chain.

Expectations about course presentation, super-fast greens, longer courses and pace of play are among the downsides of televised golf with golfers worldwide understandably coming to the conclusion that if it’s what they see on TV then it must be ‘good’.

But this forced break might be just the reset the game needs at many levels, professional golf included.

If the PGA Tour’s ambitious restart date of June 11 is met it’s difficult to imagine it will be a tournament presented in the manner in which we have become accustomed.

Under the circumstances, it seems unlikely Colonial Country Club will be as pristine – condition wise – as might otherwise have been expected.

It will also be impossible for the Tour and TV to have anywhere near as many staff on ground as would normally be the case and hence, the coverage should be a less cluttered affair.

Ironically, viewer numbers will likely be up as a fan base starved of the product for three months tunes in.

If it is a less bloated telecast they are met with, will it cause any/many to tune out? I’m willing to bet not.

In fact, the opposite may well be the case as a simpler presentation will likely allow the golf itself to shine a little brighter.

A crisis such as that brought on by this pandemic is often a catalyst for change and for a game that has become used to excess that won’t necessarily be a bad thing.

In fact, when all is said and done, this forced off season might be the best thing to happen to golf in more than a generation. 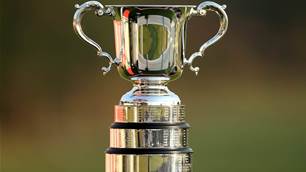