THERE was a certain poignancy to Peter Senior wearing all black for the final round of the UNIQLO Masters. Firstly, his form was as impressive as the World Cup-winning rugby union team of the same attire, and in the same month the Black Knight of golf, Gary Player, turned 80, we received yet another reminder of not just the length of Senior’s career but its phenomenal success rate. 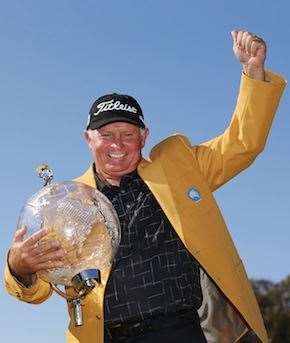 Peter Senior reacts to the crowd while posing with the trophy after winning the UNIQLO Masters.
PHOTO: Michael Dodge/Getty Images.

The 56-year-old won the Australian Masters for the third time in his career – 20 years since the last one – and he now has post-50 victories at our nation’s PGA, Open and Masters. When it comes to career longevity, Player has a great head start for age but Senior’s haul of trophies may not be surpassed.

What might be considered a long shot victory – particularly considering that the heavy tournament favourite Adam Scott was 11-under after 27 holes – was in fact anything but. We learned at the Australian Open three years ago, which Senior won in wild winds at The Lakes 23 years after his first Open victory, that he is never one to be discounted, no matter the conditions and no matter the number on his birth certificate.

“It still hasn’t sunk in yet,” Senior said. “You don’t expect to win these events anymore, and to win this tournament, the Aussie Open a few years ago and the PGA a couple of years before that, all of them over 50 years of age, I think that’s a big thing for me.” 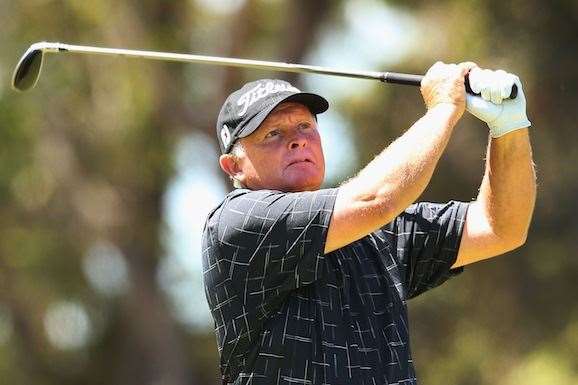 Senior hits an approach shot during the final round PHOTO: Michael Dodge/Getty Images.

Senior began the final round at 5-under and two shots behind leader Matthew Millar but quickly surged into a share of the lead with birdies at the opening two holes. He drifted back a little over the rest of the front nine on Sunday before authoring the shot of the tournament with a rifle-like hybrid second shot to Huntingdale’s 10th hole, which this year was played as a long par-4 rather than its customary role as a short par-5. Senior’s ball landed on the front edge of the green and bounced and trickled to within a foot of the cup, gifting the Singapore-born Queenslander a birdie to push him to 8-under. A further birdie at the 13th lifted him to 9-under at the same time as Millar three-putted the 12th green for a bogey to fall to 6-under. 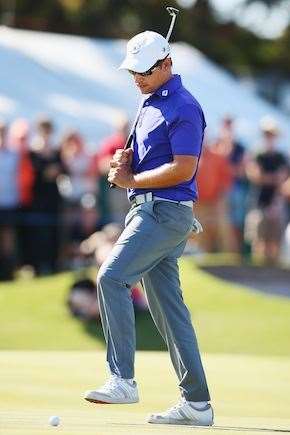 Andrew Evans misses a putt on the final hole and his chances of winning are gone.
PHOTO: Michael Dodge/Getty Images.

With DeChambeau in the clubhouse at 6-under, it appeared Senior would coast to victory yet Evans made him work for this gold jacket. He birdied the 15th and 16th holes to reach 8-under and when Senior drove wildly at the always-difficult 17th and made bogey, the pair were tied. Evans bogeyed the 17th via a fairway bunker as Senior saved a typically gritty par from the back-left bunker next to the 18th green, holing an eight-foot par putt to remain 8 under.

Evans needed to birdie the last to force a playoff and his 25-footer across the front of the green to an unfamiliar pin position came up well shy. He then missed the par attempt to fall into a three-way tie for runner-up honours and gave Senior a two-stroke margin.

“Once I birdied the 10th hole today, I figured I had a really good chance,” Senior said. “I played pretty solid. I hit a couple of bad shots towards the end there, but I’m just over the moon.”

Scott opened with a 64 and closed with a 69 to finish fifth, his bid for a third gold jacket in four years undone by erratic driving, especially in a Saturday 77.

“It’s just amazing. I’m still blown over winning this tournament,” Senior said. “The guys played pretty well. I’m pretty shocked with what happened to Adam. After the first round, everybody thought he was going to run away with it and probably should have. But golf’s a funny game. That’s what we play it for, and I’m really happy to be the winner this week.” 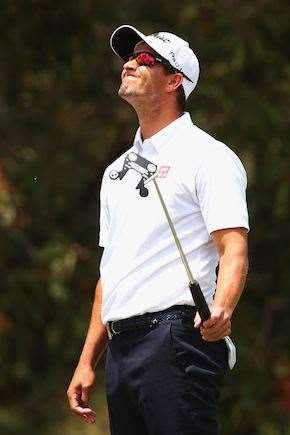 Adam Scott was frustrated more with his driving than his putting this week. PHOTO: Michael Dodge/Getty Images.

Take nothing away from his success and longevity; Senior is one of the underrated figures in world golf and it remains puzzling how he has never won on the Champions Tour in America. In the post-anchoring era that begins in 2016, he intends to give himself one more season there before returning home for good.

Asked what winning at age 56 means not just for golf, but for people over 50, the man who began hoisting trophies in the same year the Masters began, 1979, was wonderfully candid.

“They will probably say, ‘Is that old bastard gone yet?’”