The Yarra Valley is one of Australia’s most acclaimed, and oldest, wine-growing regions.

With its rich soils – first planted on in 1838 – and temperate climate, the valley has become synonymous with premium, award-winning wine featuring many classic varietals and specialising in Sparkling wine, Chardonnay, Pinot Noir and Cabernet blends.

There are more than 80 wineries (as well as a fine selection of renowned breweries and distilleries) scattered across the picturesque region, making it a haven for day-trippers and those seeking the ultimate long weekend getaway where you mix delicious beverages, five-star food and, for the golfers, a few rounds of golf.

High quality golf is a relative newcomer to the valley with some of the game’s most-acclaimed course designers only being drawn to the area during the past 25 years. Today, the region boasts a wonderful mix of nationally ranked layouts and highly regarded public access courses, making the Yarra Valley one of Victoria’s great golf destinations.

Heading east from Melbourne’s city centre, an easy 60-minute drive will have you in the heart of the valley where there is a smorgasbord of golf course choices within close reach of each other.

The closest to the city is The Heritage Golf & Country Club, which delivers high quality design and presentation across both of its 18-hole layouts.

Opened for play in 2000, the St John Course is the first private Jack Nicklaus ‘Signature’ course built in Australia and was named after the Order of St John of God Catholic religious order that formerly owned the land. It seems they left a slice of golfing heaven behind when they passed it on to The Heritage’s developers. The 18th green of The Heritage's St. Johns course in front of the impressive clubhouse. PHOTO: Brendan James.

As the greatest golfer of the 20th century, The Golden Bear won 115 professional tournaments worldwide, including 18 major titles, using the right mix of power and strategy.

As a course designer, he brings these same attributes to the table and his St John layout is evidence of that. It is, however, important you tackle this course from the appropriate tee – Blue, White or Red – to fully understand the challenge Nicklaus was creating with each hole. In saying that, St John is still a healthy 6,670 metres from the back pegs.

Nicklaus is a great fan of designing holes where the tee is elevated above the fairway or green and also favours having at least one par-5 on his courses that is “definitely reachable with two excellent shots under almost any circumstances.”

The finest example of this is the 458-metre par-5 12th. The tee is perched high above the fairway. Water right is clearly visible, as is a deep fairway trap set just to the right of the middle of the fairway. The heroic player can try and needle his drive into the small landing area between the bunker and the water, therefore, shortening the route to the green and providing an eagle opportunity. Drives to the left of the bunker eliminate almost any chance, except for the prodigious hitter, of reaching the green in two.

The Heritage also boasts a second course, Henley, which was designed by Tony Cashmore in consultation with Nicklaus Design and is located on the north side of the Yarra River, which runs through the property. 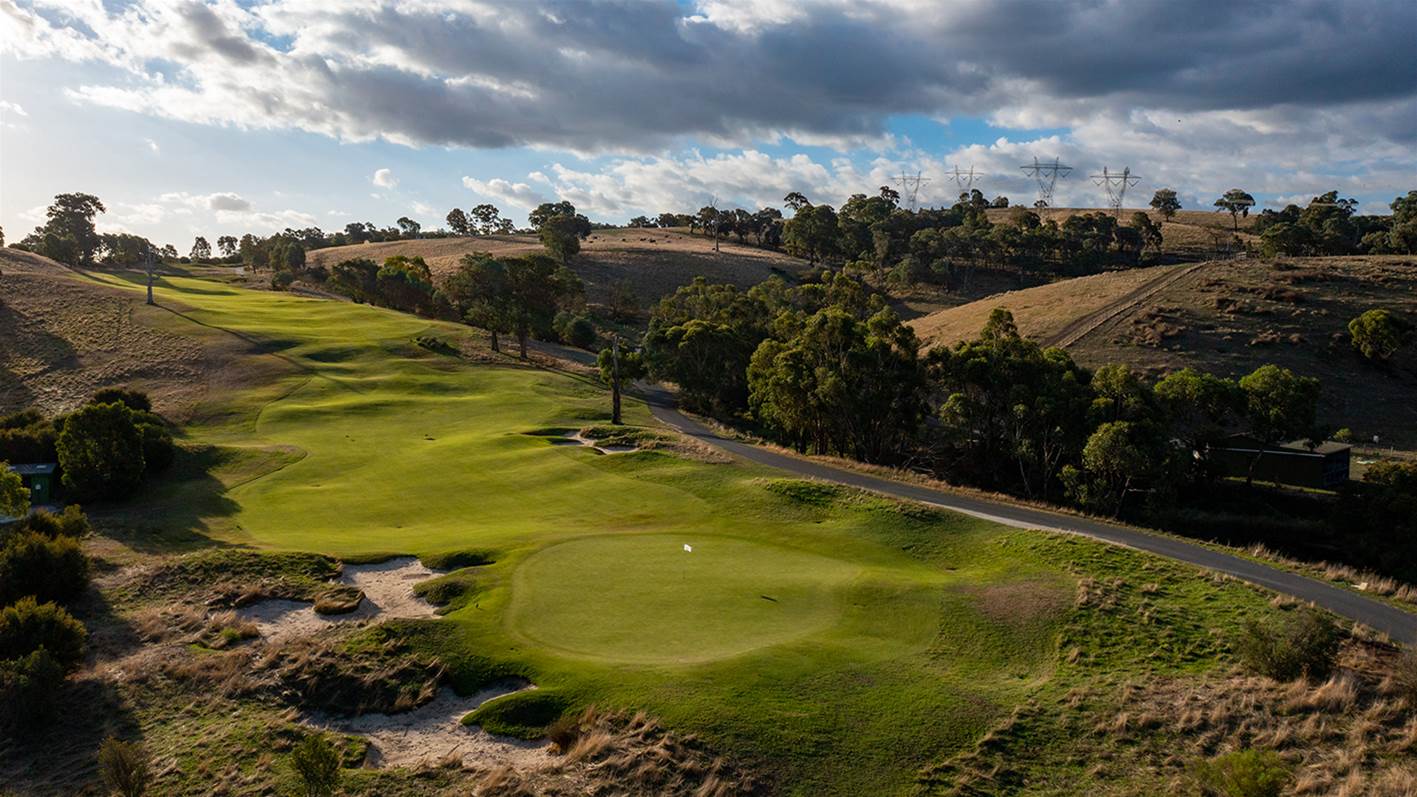 The cascading 16th fairway of the Henley Course at The Heritage. PHOTO: Brendan James.

It is a wonderful location. The vast river floodplain, with its ancient oxbows and billabongs, frame the holes of the opening nine as well as the final two holes. These holes were elevated above the wetlands during construction and have been shaped to create beautiful rolling fairways.

From the wetlands, the 5,944-metre par-72 (from the Blue tees) climbs gradually up a broad valley on the memorable par-5 13th hole to reach land perched high on a plateau where you will find the 14th and 15th holes. While the climb up the hill is slow, the par-4 16th is a dramatic drop from the tee to green. The steep descent really shortens the 447-metre hole that links the high holes with the remaining flat holes.

Under the country club’s new ownership, the presentation of both courses at The Heritage has improved dramatically in recent times, which better showcases the wonderful designs created by Nicklaus and Cashmore.

This is a private member’s club. However, guests of the adjoining Yarra Valley Lodge can take advantage of play and stay deals, while interstate and international golfers can enquire with the club for a limited tee time.

The Heritage’s nearest neighbour also lies beside the banks of the Yarra River and is home to the highest nationally ranked layout in the valley.

One of the golfing jewels in the valley’s crown is the Greg Norman-designed 27-hole layout – and nine-hole short course, Shark Waters – at The Eastern Golf Club, which opened for play in 2015. 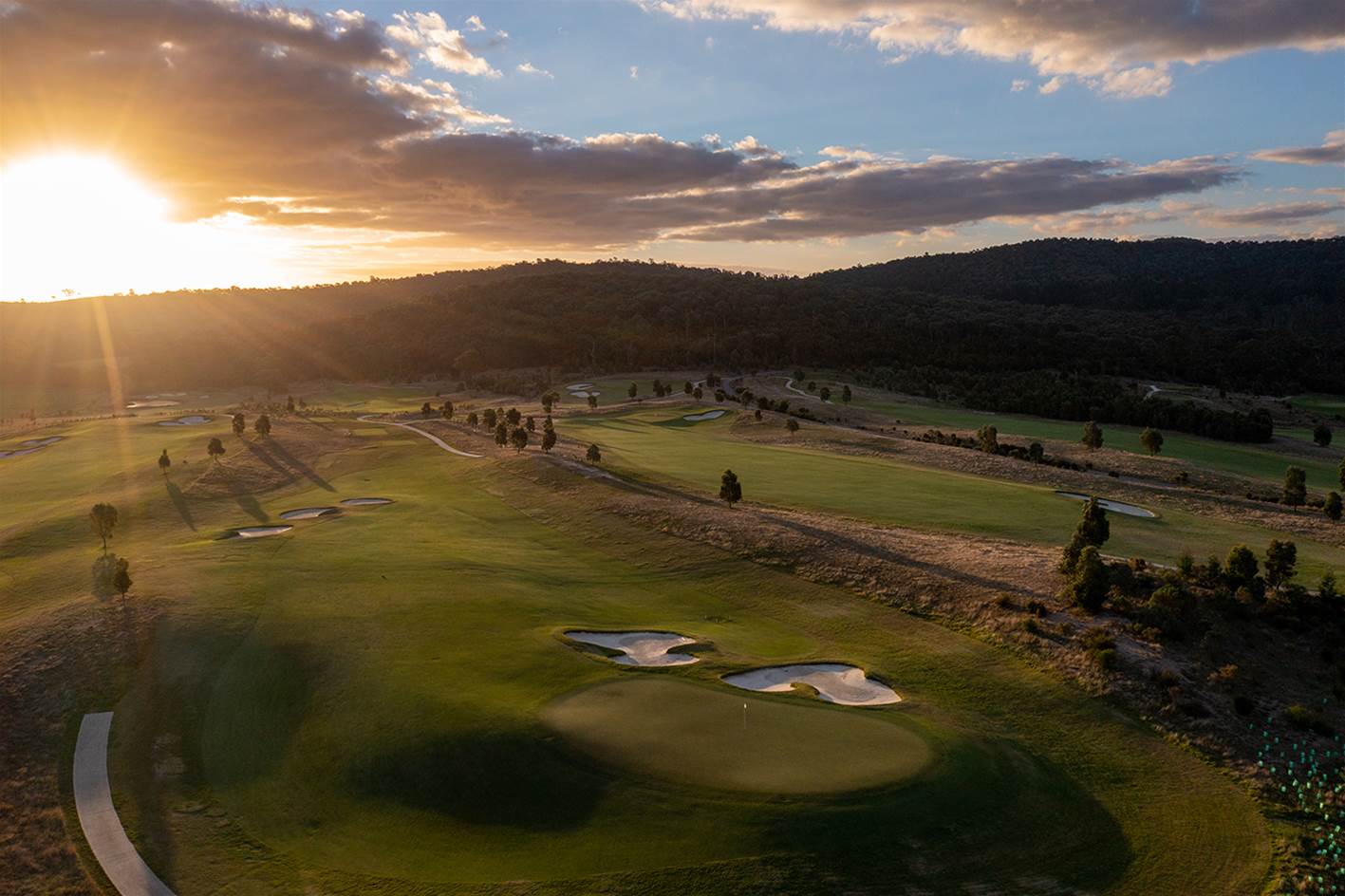 A beautiful sunset to remember over the South Course at The Eastern Golf Club. PHOTO: Brendan James.

In creating The Eastern’s layouts, Norman’s design team carefully considered the prevailing winds as well as the elevation changes within the property to route the layout in all directions. This gave rise to a host of memorable and fun holes, while also taking advantage of some fabulous views of the nearby Christmas Hills and beyond to the Great Dividing Range in the east and the Dandenongs to the south. Each loop of nine holes is routed to start and finish at the clubhouse, which offers commanding views over the entire course.

The fairways are generously wide with strategically located bunkering to challenge and reward the best placed shots. The bunkering is typical of the style Norman has employed at other course projects he has been involved in throughout the country, while the greens – covered in the smooth rolling T1 bentgrass – vary in shape and size throughout. The greenside bunkering combines with tightly mown couch surrounds to place a premium on approach shot accuracy.