When Charles Howell III arrived on the PGA Tour he was anointed as the young gun most likely to challenge Tiger Woods at the height of his game. Seventeen years on, history tells a different tale.

Not since Tiger Woods has a young player generated this much buzz. Meet one of the most exciting young talents in the game, Charles Howell III, next on Golf Talk Live.”

“Charles Howell III began this season with no official status on the PGA Tour. Unofficially, his status was that of the hottest prospect since some guy named Tiger. How hot? Well, when Howell signed with representative Rocky Hambric, the agent gave him five percent of his company. Callaway handed the youngster well over a million dollars per year for better than four years.

“Said Tony Navarro, long-time caddie for Greg Norman, ‘There’s nothing this kid can’t do. It’s scary to think about.’ Veteran Andrew Magee watched the wiry Howell hit balls, then proclaimed he may have the best shoulder turn out here. Jack Nicklaus was asked who might challenge Tiger. The answer: Charles Howell III.” Through the prism of history, that introduction to a Golf Channel interview with Howell on August 6, 2001, seems overcooked and farcical, a tragicomic portrayal of a ballyhooed prodigy who never materialised. That buzz – amplified by society’s electrifying entrance into the Internet Age – wore off quickly, even if Howell’s shoulder turn remained textbook.

Howell did not challenge Tiger. True, nobody really did. But others near Howell’s age significantly moved the needle: Adam Scott, Sergio Garcia, Justin Rose, Luke Donald.

While earning a reputation as one of the most likable players on the PGA Tour, he also became known as someone who couldn’t finish. Howell has harvested PGA Tour runner-up money 16 times (including a 1-4 record in playoffs) and third-place money nine times.

He had just two Tour victories until he won at the RSM Classic last November in St Simons Island, Georgia – his first since the Nissan Open in 2007, when he beat Phil Mickelson in a playoff. That drought encompassed 4,291 days and 333 tournaments. The win came in his 529th start – only two players in Tour history needed more starts to notch their third victory. When you enter the Tour with the kind of fanfare Howell experienced and go that long without holding the hardware above your head, doubt inevitably creeps in.

“Golf is a brutal game, and with the highest of the highs, it comes with a lot of really lows.” – Charles Howell III

“You know, golf is a brutal game, and with the highest of the highs, it comes with a lot of really lows,” Howell says. “You know, you work and then you practice and you prepare and you think you’re doing all the right things and the results don’t quite show that. So then you start to question everything, really.

“It’s a wonderful lesson to be learned that if you truly believe in what you’re doing … stay the course. Quite honestly, I didn’t know if I would ever win one again, for the obvious reasons that I had come up short so many times and the fact of how the game is changing.” It was the first victory for him since either of his children – Ansley, 8, and Chase (Charles Howell IV), 6 – were born. (“They were hardly even considered at that point,” he quips.) It probably doesn’t help your psyche when your son knows Justin Thomas’ entire bag setup, follows him more on the PGA Tour app than he follows you and believes JT “hung the moon.”

Now they know that their dad is a legit, big-time golfer. And he no longer has to answer the question, “Daddy, why aren’t you playing in the Masters?”

Howell grew up in Augusta, Georgia. And when you grow up on that sacred turf, you play golf. His father built two practice greens and a practice bunker in their backyard and, starting at age seven, young Charles went to work.

It didn’t take him long to crystallise his life ambition: to play golf professionally. It seemed to fit his personality – a bit of a loner, definitely an individualistic type. He liked the credit he would get, but also felt like he could handle taking the blame.

The Howell family belonged to Augusta Country Club, which is adjacent to Amen Corner at August National. The 9th hole of Augusta CC borders the 12th green and 13th tee of Augusta National. Howell could peer over the fence and dream. And then he attended the 1987 Masters and watched Larry Mize devastate Greg Norman with a miraculous chip that set off a roar that rocked the pines. And then he played Augusta National for the first time, shooting a 79.

When he was 10, he won the Future Masters, which at the time was the most significant junior tournament in America. He could feel the confidence brewing inside of him: He believed he had the God-given talent to be special. It was simply a matter of how much work he put into it.

At 11, he began lessons with David Leadbetter. He didn’t find Leadbetter to be “overtechnical,” as his critics contended. A tough, demanding instructor? Yeah, but he became like a second father to Howell. Howell’s golf swing has long been the envy of his fellow players and analysts. PHOTO: Getty Images.

Howell rode his momentum to Oklahoma State University, where he won the NCAA individual title, lead OSU to the team title and won the Haskins Award as the top college player in the country.

After he turned pro in 2000, he moved to Orlando, Florida, and became one of Tiger’s favourite golf mates, leading to their pairing together at many tournaments (including the 2003 President’s Cup in South Africa, where they went 2-2 as a team) and Howell’s inclusion in the video game, Tiger Woods PGA Tour 2005.

Then ESPN announcer Charlie Rymer took Howell’s profile to another level in 2000 when he coined the nickname “Chucky Three Sticks” (signified by the three ‘I’s that form the Roman numeral). And it entered lore as one of the great nicknames in golf, joining Aquaman (Woody Austin), Boss of the Moss (Loren Roberts), Champagne Tony (Tony Lema) and The Great White Shark (do we have to identify him?).

In 2001, he won PGA Tour Rookie of the Year. In 2002, he won for the first time on Tour and set the PGA Tour record for the most money won on Tour in his first two seasons.

He didn’t win again until 2007, but he was still held in such high regard that Rose said, “I think Charles possibly is the best player in the world right now, other than Tiger.”

He never made a Ryder Cup or Presidents Cup. And after finishing 18th in the world rankings in 2003, he never ranked higher than 42nd, and his average finish at the end of the year has been 115th.

But he never got so discouraged that he thought of giving up.

“It’s the same reason Bernhard Langer’s playing when he’s 105,” he says. “It’s just like, the carrot is always dangled out there in this game. Sometimes (athletes) need a coach to say, ‘You know what? You’re not good enough anymore and it’s time to go to pasture.’ But in golf, it’s always out there. You just know you’re one day away, or whatever.”

He has come to grips with the cruel nature of the game. Even for the best players, a love-hate relationship can develop.

What he loves: “It’s all on you. It’s all on the player. Golf is never about one competitor versus another, and it never will be. It’s against the player versus himself and versus the golf course. It’s just you against you, and as crazy as that sounds, it’s the way that it is.” The emotion of finally winning again after 4,291 days hit Howell as he putted out. PHOTO: Getty Images.

It helps that he is a passionate student of the game. He is captivated by the process of improvement. While he says that one of his “flaws” is that he actually enjoys practising and preparing more than playing, it has served him well.

“When I’ve struggled or when I don’t play well or don’t get the results I want, I always go back to, ‘OK, how do I improve? How do I get better? What do I need to work on?’” he says. “So I actually find a bit of comfort in that and I enjoy that. That’s the part I really, really enjoy.

“With that said, it probably helps me a little bit. But I do love trying to improve and trying to get better. Part of the drive for that is this next wave and generation coming up. I mean, how good these guys are. That’s a massive push to do that.”

He gets it: People don’t believe he has fulfilled his promise. But he believes his consistency has been as amazing as his failure to win a major. He’s a cut-making maestro: 410 times in 529 tournaments going into 2019, and 90 of those 410 made cuts resulted in a top-10 finish. A year ago at the Sony Open, Tour commissioner Jay Monahan publicly recognised Howell for making his 500th career start.

He’s won more than $37 million in his career. Never once has he flirted with losing his
playing privileges.

And the reward comes in April when he makes the magnificent, spine-tingling drive down Magnolia Lane, knowing that he will be playing in the Masters for the first time since 2012. As he once noted, “You can’t win the Masters sitting on your couch.”

“That tournament, that atmosphere, just everything ... it’s tough at home to sit back and watch that on television,” he says.

He once joked that if he ever won the Masters, he’d retire the next day. Guess what? If he wins, that’s not happening. Chucky Three Sticks is in this thing for the long haul. 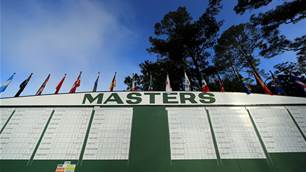