Having never hidden my desire to hold on to history, I wondered during a moment of absent thought, what if the old stuff is as good as the new stuff?

Is it time to look back given the fresh year?

Time to stop getting caught up in what we might be missing, and remember what we already have?

Clubs, I mean. Not balls, and not even drivers, but irons. What if the older clubs performed as well as the newer clubs? Now, I know the big-time manufacturers keep reinventing wedges, but it’s hard to see how they’re different.

In fact, as a test, I went to the old bag in the shed and pulled out five different short irons, including my home-made “Shooter” and showed them to my wife. I said, “Jacquelyn,” because that’s her name and she knows I’m serious when I add the ‘quelyn’ to ‘Jac’, “can you see the difference in these golf clubs?”

Within seconds she nailed it.

“That one, (Callaway MD3 Milled) has holes, and the word ‘Daddonator’ on it. This one, (Snake Eyes 685BX) has eyes on it. One says Shooter 100, one is signed by Greg Norman and has sticky tape and a snake on it, (Cobra Sand wedge) and one is from Cleveland. It’s actually a Cleveland pitching wedge (Reg 588).”

She was right on every count, of course. Except the sticky tape is lead tape, and she correctly surmised that it’s considerably smaller than the other heads. I pressed on, “But what of the shapes? The design? What of the clubs as a piece of manufacturing and ingenuity? Would you say they’re all …” And I left that to hang, because like Tom Cruise in a lawyer movie, I would not be leading this witness.

“All, what?” she said. “The same? Are you asking if they’re the same? They look the same, which makes me wonder something else.”

“What is it you wonder, darling?” I said.

“I know the big-time manufacturers keep reinventing wedges, but it’s hard to see how they’re different.”

“Why do you have five of the same thing?” She then looked skyward, for in the eaves of the shed are sets of clubs lined up lovingly, waiting for a return to the playing bag. “In fact, why do you have so many golf clubs? I’ve never actually looked before, but there’s heaps of them. I’m guessing you got most of these from rubbish chuck out, daaaaarling ...”

“Yes, of course, of course.” I nodded ridiculously. “So you think the wedges are the same, then?”

“To my untrained scientific eye, yes, they would appear to be much of a muchness.”

Alas she is correct, I think. For the record, I’m not saying the new wedges that look like the old wedges are one and the same, but maybe they’re not that far off. I had been to a golf shop with my wife and was fairly suckered by the shiny rows of newness. Jac had to physically drag me from the place, and that’s the truth, saying, “You have more than you can use at home. Show me how you can’t hit the old clubs, then maybe we can get rid of them to make room for new clubs.”

She’s smart, but clearly not that smart.

I was now licensed to drag down the old Cleveland TA1 blades from 2000, smack them out of the hosel and get rid of them. Forever. Except, after a mind-numbing wade through the world wide web, it turns out the Cleveland TA1’s were the NUMBER ONE IRON ON TOUR in 2005! Five years after they were launched!

So, I put half the set in my half-sized golf bag and hit them at the local on a sunny afternoon and guess what, they’re bloody brilliant. Form forged, they are. And whilst they do appear small, they’re not that small. There is some genuine feedback on the bad shots, which is more of a reason not to hit them, especially when it’s cold.

They look beautiful, too. After doing the lies and lofts they even go beautiful(ly). So now they’re in the bag and the newish clubs are out. For how long, I don’t know.

I desperately want to re-try the old Cobra sand wedge but that would mean off-loading my home-made S&Y (Sandy) club, and it’s too soon to give up on that dream.

Whilst the driver is safe, the putter’s out as well. Replaced by the Ram Zebra with the red insert. 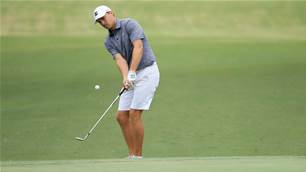