Two-shot holes – whether they are medium to long par-4s or short par-5s – make up the majority of holes we all play. Golf Australia Architecture Editor Mike Clayton explains what separates the great from the good and reveals a host of Australia’s best.

The test at the heart of every golf course made to test ‘championship golf’ is the collection of medium to long two-shot holes.

The par-3s use up small spaces, alleviate the need for long walks between holes and ensure everybody, at some point in the round, plays shots to greens from the same place.

The short 4s mix quirk, humour, the need for a vexing decision from the tee and whilst you hope for a birdie a dropped shot is unnecessary, annoying but easily done. Unlike the longer two shotters, a driver isn’t often the best club from the tee.

But generally it’s the longer two-shotters (whether they be medium to long 4s or short 5s) making up the largest group of holes (Royal Melbourne West has 10, Royal Adelaide 8). As The reason so many of my favourite holes are found on courses recognised as the best in the country is simply because they show off the widest collection of first-class holes.

They play over the most interesting pieces of land highlighted generally, but not always, by a sand base, undulation, ideal indigenous vegetation and the space to make a great routing.

In this era it is assumed the higher ranked courses are in good condition and some, including New South Wales, The National Old Course and Barnbougle Dunes add spectacular views to the experience of playing the course. Fundamentally though, in truly measuring the quality of a course, the condition of the playing surfaces and the views are less important than the quality of the holes. A great experience does not necessarily make a great course but the best courses mix the experience (the views, condition, ambience and reputation) with great architecture.

There are, of course, scores of lesser-known or less well-regarded courses with a brilliant hole or two, holes capable of holding their head up at Royal Melbourne. Kingston Heath, NSW or Royal Adelaide. Melbourne’s Long Island is a ‘second-tier’ sandbelt course (in a game dependent on quality second and third-tier courses for its popularity and survival) but my description would be under-valuing what is a fine course on one of the more interesting pieces of suburban golf land in the country. The run of par-4s from the 6th to the 8th match any trio of par-4s at more famous courses and any list of the best long two-shot holes in the country should include both the 6th and 7th at Long Island. The 5th and 6th holes at Newcastle play over similarly brilliant, undulating dune land, putting them in the same class.

The best long two-shotters test a player’s ability to execute a pair of classy long shots. At the same time, they show off interesting strategies most often built around a green benefiting a shot played from a particular part of the fairway. Almost always, the preferred line is defended by a hazard designed to cost a shot, or at least a portion of one.

One of the best is Royal Melbourne West’s 17th. It clearly favours a right-to-left tee shot played close to the fairway bunker on the left corner of the dogleg but the green, orientated from left-to-right and guarded by a deep bunker on the right, screams out for a left-to-right approach. The further right the drive the more difficult the approach. The principles of the 15th at Metropolitan and Spring Valley’s 9th are exactly the same but laid out on flat land. MacKenzie repeated the draw tee shot (for a right hander) followed by a left-to-right approach a few years later when he built the 13th at Augusta, one of the finest long two-shotters in the game.

The architectural ideal is to make quite different shots from either side of the fairway and Kooyonga’s 8th is one of the best examples. From high to the left the lie is flatter and the small, up-turned green visible but from the right the approach is blind, usually longer, and a stance with the ball below your feet assumed. The 17th at St Andrews and Augusta’s 13th are probably the two best-known examples of making wildly different shots from either edge of the fairway but there are many in Australia because the best of our golf shows off wide fairways and interesting green complexes and they are the two keys to making the principle work.

Royal Queensland’s 5th, the 16th at Commonwealth and the finishing hole on the East at Royal Melbourne are notable holes rewarding a shot to the preferred side of the hole.

Whilst difficulty, or lack of it, in itself is no measure of the quality of a hole there is no scarier test of execution than the tee shot off the 15th at NSW. The fairway is lined on both sides by unplayable lies (and lost balls) and into the north wind there aren’t many swinging away without a hint of apprehension. The impact of modern technology has been to fundamentally alter how these holes play and it’s unarguable the examinations set by Alister MacKenzie and his contemporaries in the 1920s are simplified for top-level players, as approach shots intended to be played with fairway woods and long irons are now most often played with short irons.

It has resulted in something of an obsession with par and whilst holes – including Royal Melbourne West ’s 12th, Yarra Yarra’s 16th and 18th and the 1st holes at Victoria and The Australian – are par-5s for members, they are easily reachable by first-class players with middle and short irons and play as par-4s in big tournaments. They are wonderful holes but the fundamental test has been changed and whether they are called 4s or 5s is completely irrelevant. Of my favourites, Kingston Heath’s 11th is one of few truly great flat holes.

A 400-metre left-to-right dogleg, it has been much altered over the years.

The tee moved forward and right and then decades later moved back to where Dan Soutar and MacKenzie sited it. The fairway bunkers, originally placed for hickory shafted drivers, moved further along the fairway and a small, controversial bunker in the middle of the fairway survived for 15 years before being removed.

“Indeed, if golf design always followed a strict set of rules it would be both boring and predictable …”

The small green is difficult to hit and proof the adage of making a green a certain size to reflect the difficulty and length of the approach, whilst sensible can be broken without detriment. Indeed, if golf design always followed a strict set of rules it would be both boring and predictable and so many of these great holes break with convention and we are all better for those who made the choice to deviate from the norm. 9. Best where both shots are blind: Portsea 18th.

11. Best use of a diagonal ridge-line: Tee shots at The National Moonah 3rd, Portsea 17th. 17. Most suited to a long, running approach: Lost Farm 18th.

23. Almost great but not quite: Kooyonga 8th, Royal Sydney 4th.

29. Best hole with a bunker in the middle of the fairway: Royal Canberra 14th. 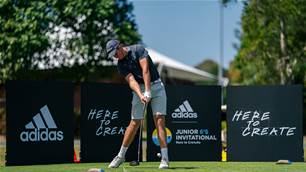