Par-5s aren’t what they used to be, at least in the way they are played at the top echelons of the game. But as Golf Australia Architecture Editor Mike Clayton explains, Australia still has a bunch of first-class long holes no one would ever describe as ‘nondescripts’.

In the 1920s the great American architect, A.W Tillinghast wrote somewhat disparagingly of par-5s when he said, “Comparatively speaking there are more thoroughly bad three-shot holes than those of every other type. For the most part the three-shotters which are encountered on the average courses are nondescripts beyond the range of two shots.” Of course, what was considered a ‘three shot hole’ in the 1920s isn’t the same thing now when holes previously thought of as unreachable are now easily within reach of two powerful shots.

In a large part it is the result of modern equipment – but those who saw Steve Elkington twice reach the 11th at The Lakes in two shots during the 1992 Australian Open or Greg Norman make an albatross on the 5th at The Australian in 1990 saw a window into the future. As extraordinary as Elkington’s long woods across the water were, Bubba Watson was on the same green with a drive and a 7-iron in the 2011 Australian Open. The wind was behind but playing partner Geoff Ogilvy – no slouch himself – still needed a 3-wood.

The 14th at Huntingdale was another iconic tournament hole and one of a few Australian holes over 600 yards (606 yards in the old money) and unless it was playing a long way downwind and on baked, fast running summer fairways no one ever thought about getting there in two.

Then in a late-1980s Australian Masters, and to the astonishment of everyone, Greg Norman reached it with a couple of drivers. Thirty years on, anyone who can really hit is on there in two and with any wind behind it’s often with a long iron.

At the same time, the bombers started reaching Victoria’s 9th, the 5th at The Australian, 11 at The Lakes, Royal Melbourne’s 17th, Royal Adelaide’s 9th and the opener at Kooyonga. Once those formidably long holes were within reach there wasn’t much left aside from maybe The National Moonah’s 12th with the long second all the way uphill making it probably the least reachable hole in the country.

Perhaps though, as Tillinghast alludes to, having them within reach of two great shots isn’t such a bad thing.

The 11th at The Lakes is much more dangerous and exciting when it’s reachable as Elkington showed us almost 30 years ago. His feat was just more impressive then than it is now when we almost take it for granted.

The reality of the modern game at the top level is these long par-5s are now the holes where the responsibility of testing long ‘wooden club’ second shots rests. Formerly it was the role of the holes around or just over 460 metres but they are now reduced to little more than middle and short irons in championship play.

Hitting two long shots into a long hole is one of golf’s biggest thrills but watching formerly stout par-5s – holes like Metropolitan’s 8th, Lake Karrinyup’s 15th, Yarra Yarra’s 9th, Royal Sydney’s 7th or Woodlands’ 18th – reached with middle and short irons is somewhat depressing (for me anyway) and imagine what their original designers would say of what they have been reduced to at the top level. If you really want to see holes of this length played as they were intended go and watch the women play Royal Adelaide, Kooyonga and The Grange in the Australian Open.

The 11th at The Lakes has always been a hugely interesting hole with so many options of line and length once the drive is away. Now it’s reachable, the tee shot is more important (hit a less than excellent drive and the green isn’t reachable) but formerly the greater the chance you took with the second shot the shorter the third. It’s a fine example of an interesting three-shotter where each of the three shots is important and plays a role.

In the late 1970s and early 1980s, the 18th at The Australian was one example of a hole that often suffered from the ‘100-metre-par-3’ syndrome but it’s now advantaged and more interesting by the ball going further.

Having said that, the hole played its role brilliantly at the end of the 1982 Australian Open when Jack Nicklaus was on the green with a drive and a 1-iron, putting all the pressure on the leader and playing partner Bob Shearer.

Shearer, two shots ahead, could have laid up (“I was worried if I laid up I’d fat a wedge into the lake and I’d rather be in the water after two shots than after three”!!) but instead he went against the advice of his caddy, allowing Shearer to hit probably the best shot of his career. The pity is the hole needs proper long irons (not easier-to-hit hybrids) to induce fear and doubt but once the second is a 4- or a 5-iron the fear and the doubt are largely removed.

The ‘monumental decision’ Bobby Jones talked about players encountering at Augusta’s 13th is gone from both holes and it’s a pity.

There are many great examples of Australian par-5s showing off a relatively simple tee shot but following up with what would be a great 300-metre par-4. Kingston Heath’s 14th is one and all the relatively straightforward drive does is set up the myriad of options with the long second. The slope of the ground on the landing area of the second shot and the placement of the bunkers makes it a really interesting hole and one unquestionably more interesting –and dangerous – now it’s reachable.

Woodlands’ 15th, a hole architect Tom Doak has called the best flat par-5 he’s seen, is another example. Played across an utterly non-descript piece of ground, the second half of the hole is genius, made by the relatively-short cross bunkers coming in from the left rough, the line of bunkers further along on the right and the hollow in front of the green making both the pitch and a long-running second shot more complicated than they might otherwise have been. Par-5s are often a good way to use up flat, non-descript pieces of land – see Kingston Heath 12, Metropolitan 14, Lost Farm 1, Royal Queensland 9, Woodlands 15, Glenelg 18 – but two rare holes making use of brilliant rolling land are the 9th at Victoria and the 8th at Lost Farm. Neither show off much in the way of strategy (as the aforementioned holes absolutely do) but instead rely on the folds and turns in the land and the excellence of the greens to make the golf – the shots – interesting.

I wonder what Tillinghast and his contemporaries would make of it all now. I suspect they would think the ‘thoroughly bad three-shotters’ are more interesting than in the days when many were taking 3-wood shots to reach the green. They would despair at the reduction of the test the shorter par-5s, which now play as long par-4s, but either way Australia has a whole bunch of first-class long holes no one would ever describe as ‘nondescripts’.

4.         Best with bunkers in the middle of the fairway: Kingston Heath 12th and its emulated tee shot at Royal Queensland 7th.

17.       Best use of out-of-bounds as a hazard: Bonnie Doon 14th with the ridge separating the fairway from the practice fairway. 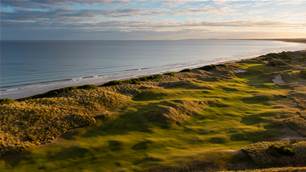