Off the back of his European Tour win on Sunday, Marcus Fraser is now dreaming of a start in the US Masters. A win in this week's Perth International could make that a reality.

SEVEN days ago Marcus Fraser was playing so poorly he looked at booking an early flight home, totally convinced he was going to miss the cut.

“The win came out of nowhere, I wasn’t expecting it all,” said Fraser, of his third European title in 14 years.

“On the Tuesday after the practice round I went and looked at flights for Friday because I thought I had absolutely no chance of making the cut.” 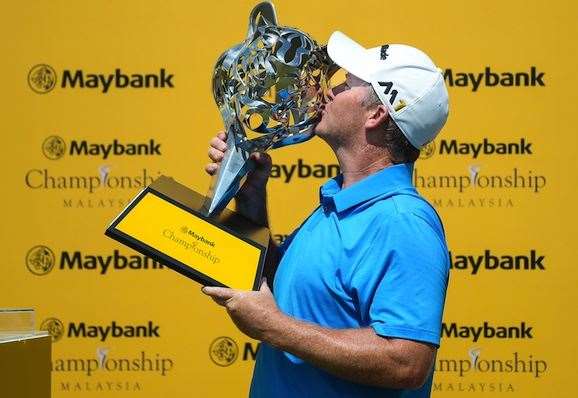 Marcus Fraser was desperately out of form before turning his game around in just a few days before winning in Malaysia. PHOTO: Mohd Rasfan/AFP/Getty Images.

But some intensive work on tournament eve to correct alignment issues that were at the root of his swing problems gave Fraser some hope all was not lost.

“No one likes to play badly. The golf I played in the Middle East (last month) was as bad as I have played a three-week stretch in all my career,” he said. “It was just awful.

“Golfers are competitive people and I wanted to fix it. I went and spent time on the range to work it out, and luckily enough I did.

“I lost complete awareness of my alignment. It sounds really basic and simple, and it is but I would stand and look down thinking I was aiming down the middle of the fairway and I was aiming at the right rough or right trees. Then I was starting make allowances in my golf swing to square the clubface up through the ball, which means you’re going to hit some good shots but, more often than not, you’re going to hit some pretty average ones. And that’s what I was doing.

“So I had to spend plenty of time on the range creating that awareness of aiming further left to imprint it my brain to fix that alignment issue. It was pretty severe and I as getting aches through my body just from trying to manipulate my golf swing.”

Finding the answer in the dirt on the range obviously worked. Fraser had just two bogies in 72 holes en route to shooting 15 under and collecting the €439,450 first prize cheque.

“For some one to back up the next week is pretty impressive. It’s tough to do. Very rarely has it been done,” he said.

“For me, I just want to go through the process of getting everything in order again this week to make sure I get to those last nine holes with a chance to win this week. But there’s a lot of work to do before that happens.

“If I can be in the mix with nine holes to go, I feel like I’m as good a chance as anybody to win.”

There is, however, extra incentive for Fraser to do well this week. Ranked No.62 in the world after his Malaysian victory, a high finish or victory this week will edge him closer to cracking a spot in the top-50 and a chance of playing his first US Masters in April.

“Going to Augusta is definitely in the back of my mind … it’s right at the front I think,” Fraser laughed. “At the start of last week I couldn’t have been further away from thinking about the Masters but now, all of a sudden, it has been thrown in front of me. 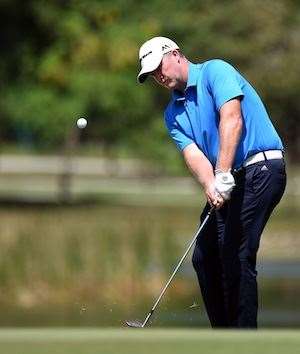 Fraser out on a short game clinic at the Maybank, getting saving par eight times over the weekend.
PHOTO: Stanley Chou/Getty Images.

Now he is so close to bettering that high-career mark over the next four weeks with two World Golf Championship events – Cadillac Championship and Dell Match Play – that promise big money and rankings points rewards.

While the financial benefits on offer in Perth and the weeks beyond are great, it is earning those valuable ranking points that have Fraser enthusiastic about this week and beyond.

“You know, if I go and play well this week, off to Doral next week (WGC Cadillac Championship) and then hopefully the match play … there’s a cut off after that for the Masters,” Fraser said.

“So at the end of the day its up to me to prepare properly for each week that I turn up for and do the very best I can … it’s a great opportunity. I’ve never played in the Masters and its something, as golfers, we all dream of doing.

“It’s right in front of me now. I’ve got nobody else to blame if it doesn’t happen. It’s entirely up to me to everything I can to get one of those spots.”