The world’s only course built during the height of the COVID-19 pandemic is now open for play, right next to two of Australia’s most highly-ranked layouts at Barnbougle. Say hello to Bougle Run.

According to Greek fabulist and storyteller, Aesop, “good things come in small packages.”

Had he not died in 560 BC, he could have been delivering his pearl of wisdom whilst standing atop a sand dune surveying the dramatic terrain that is home to Australia’s newest golf course – Bougle Run.

The 14-hole layout – consisting of 12 par-3s and two short par-4s – opened for play on March 31 and this writer has no doubt whatsoever it will prove as popular as its big brother and sister, Barnbougle Dunes and Barnbougle Lost Farm. “We were searching for what else we could do to make it more fun for golfers when they’re here. We went over to Ireland and Scotland and you could see the short courses there are all fun courses and they teach kids how to play.

“I saw that, and I’d seen what they had done at Bandon Dunes and Pinehurst, and I was convinced that’s what we had to do here at Barnbougle.

“I thought if we could build something that matched the two courses here, but shorter and more fun, that takes less time to play … people could play the course before taking off to get a flight or after getting off a flight and arriving here late in the afternoon, for example … it just fills out their Barnbougle experience.

“From a business point of view, a short course made sense more than just looking at it as just more golf.” 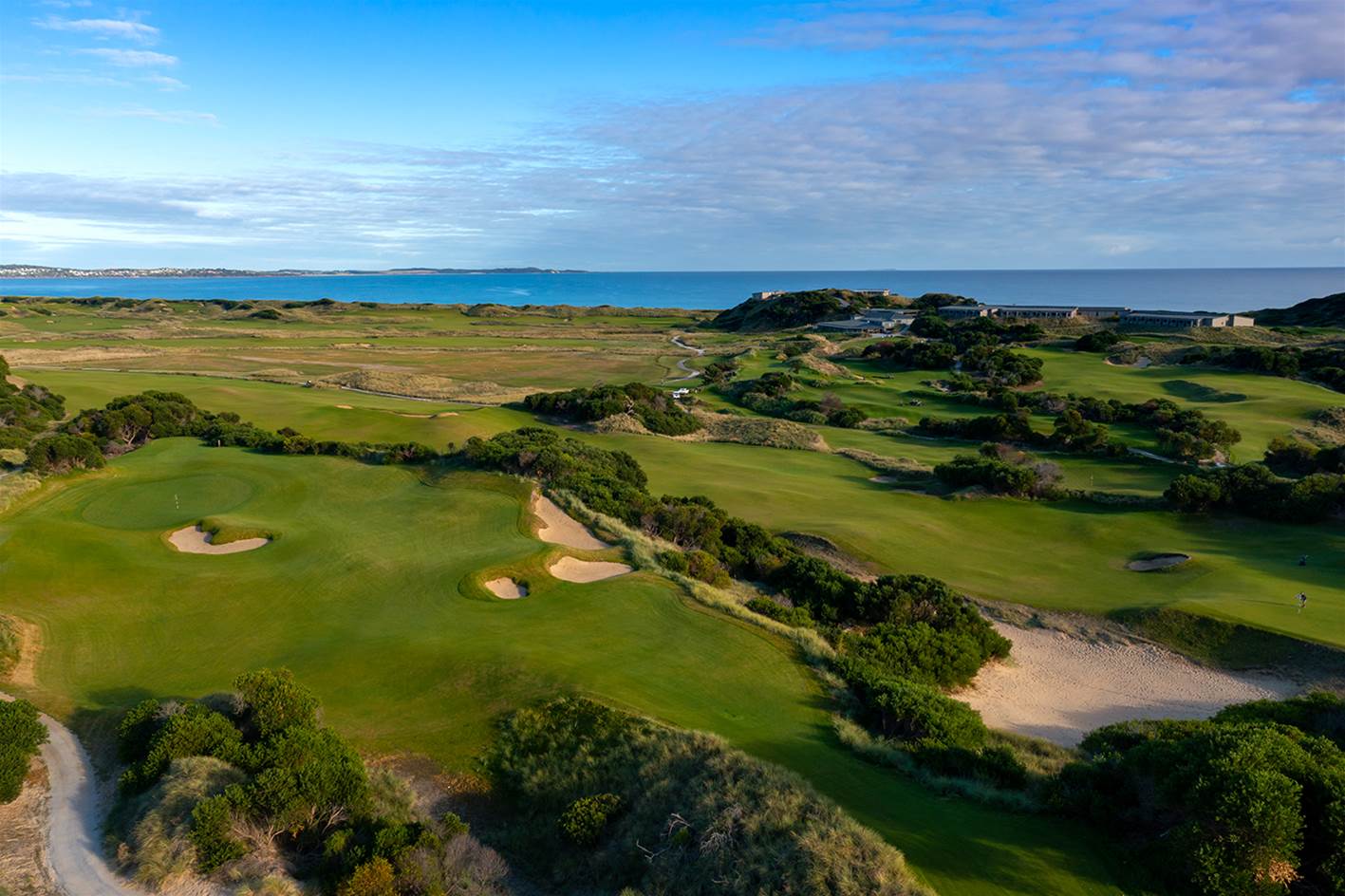 The par-4 4th is played across a huge blow out bunker to a high ridge with great views. PHOTO: Brendan James.

With the direction of Barnbougle’s third course set, it was then a question of where to build it. The answer came with a scrub fire in September 2019.

The fire broke out in an area of scrub between Lost Farm’s 8th green and the huge fescue covered sand dune that flanks the right edge of Lost Farm’s 10th fairway. It didn’t take long to extinguish the flames but the fire exposed a track up the side of the nearby dune.

“Bill (Coore) told me that in his retirement he’d love to live in Arizona for six months and six months sitting on top of that dune,” Sattler laughed.

“After the fire we walked up the track and had a look. My first thought was ‘shit, there’s more ground here than you think’. I had a look at Google Maps and it confirmed it.

“I rang Bill and told him what we had found on ‘his dune’. He said he loved the site and I told him I thought it was possible to put nine holes on the site.

“Bill got so excited and it was then I reckoned we were onto something.” 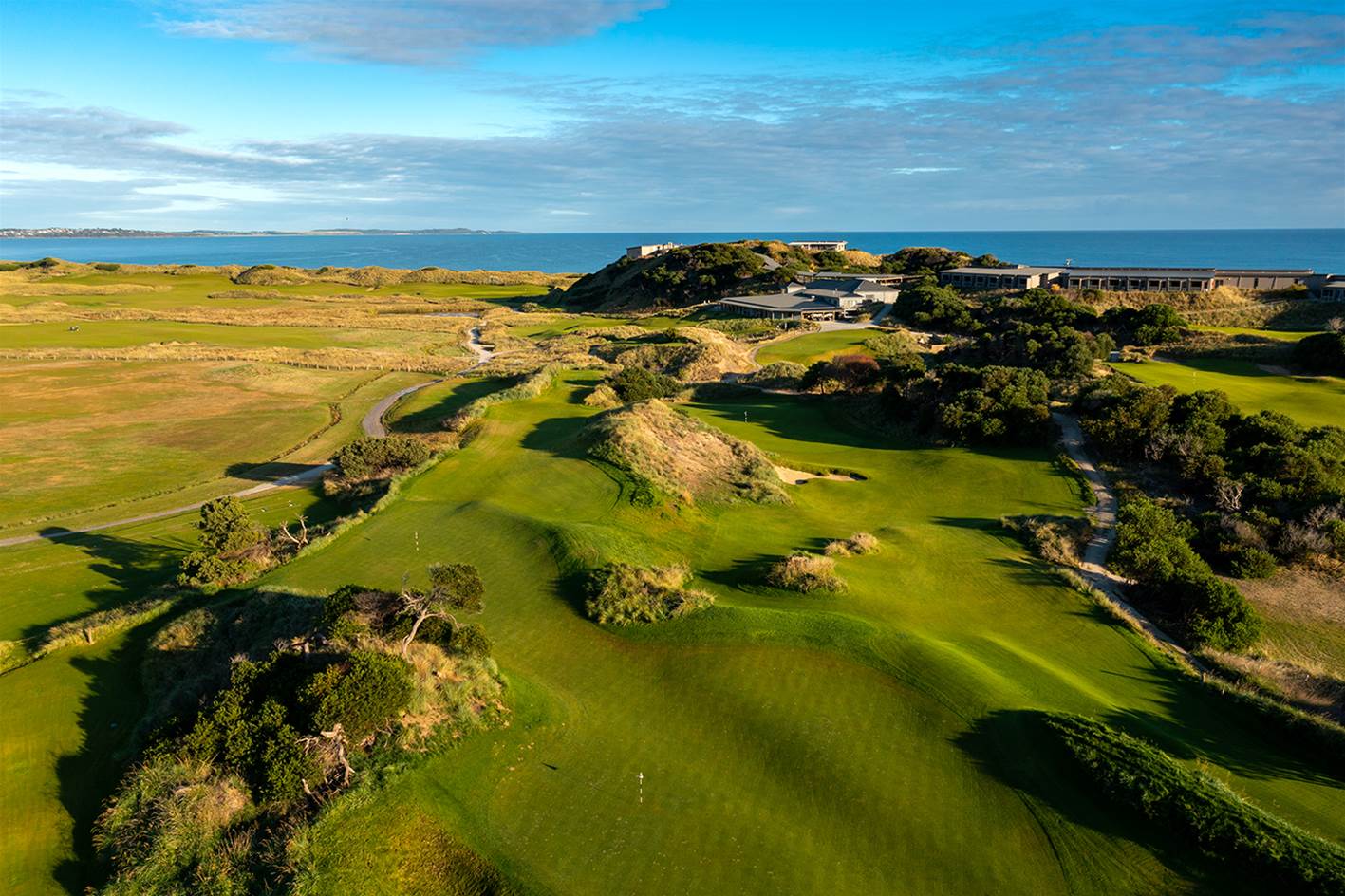 A crop of four holes, including a massive double green, where rounds start and finish. PHOTO: Brendan James.

Coore flew to Australia a few months later and walked the site with Sattler and Course Superintendent Phil Hill.

“We got the excavators out and pushed a few sight lines through and Bill walked across the dunes for three days. He came back with a plan for 24 holes,” Sattler laughed.

“I told him that was too many and we just wanted nine holes.

“We had a checklist … One. It has got to be a ‘must-play’. Two, it’s got to be the best short course in the world. Three, we’ve got to run it without extra staffing and, four, we’ve got to work out how to get golfers out to the top of the dune to start the round.

“Golf is a game based on plenty of traditions and etiquette. From day one, being a non-golfer, I found some of the etiquette ridiculous and not practical, in my mind. It’s the same with the size of the courses.” – Barnbougle owner, Richard Sattler.

“Bill came back to me and said ‘I reckon I’ve ticked every box except one … getting the players to the start of the course’.”

It was then decided to build four holes, on what was part of the practice area, which are easily reached from the Lost Farm clubhouse and lead you out to the dunes where the remaining 10 holes can be found.

“That’s how we arrived at 14 holes,” Sattler said. “It’s a bit like how we ended up with 20 holes on Lost Farm. There’s no reason why you have to be the same as everyone else.

“Golf is a game based on plenty of traditions and etiquette. From day one, being a non-golfer, I found some of the etiquette ridiculous and not practical, in my mind. It’s the same with the size of the courses.” 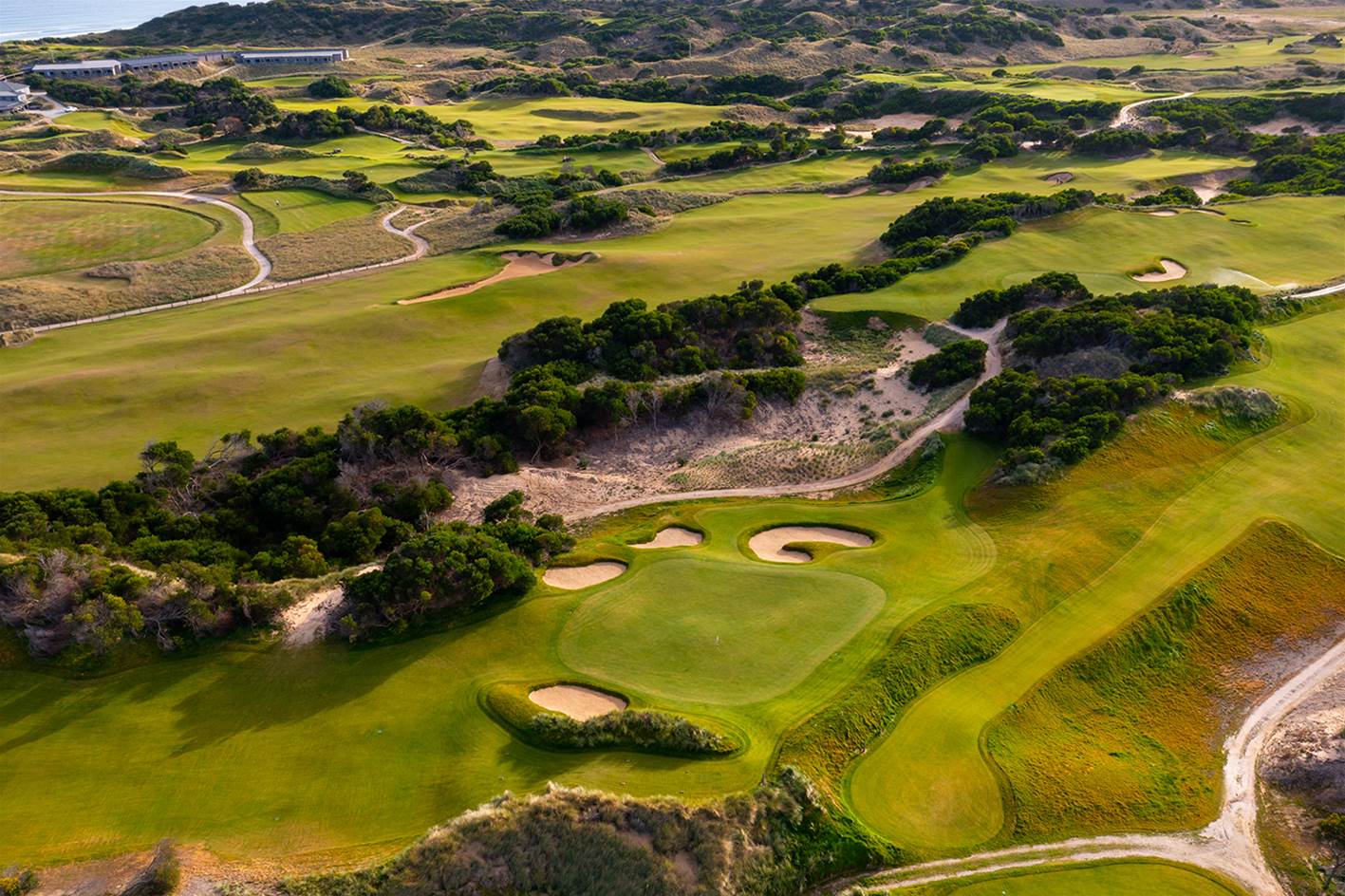 The exposed par-3 5th is a spectacular highlight of a Bougle Run round. PHOTO: Brendan James.

“Bill was due to fly back on March 28 but there were obvious health concerns about doing that and I told him health comes first and not to come,” Sattler said. “Within a few days the borders were being locked right down.

“He suggested we put the project on hold. I told him I wasn’t going to put it on hold and that we had to find a way of building it.

“Riley and Jon starting shaping up the course and then we lost Riley after the Canadian government gave him five days to get home before the border closed.”

But the project continued. Sattler successfully applied for the Federal Government’s Jobkeeper allowance during the downturn in travel and periods of course closure, and was able to retain Barnbougle’s greens staff as well as some bar, pro shop and housekeeping staff, who were keen to assist in building the new course.

“We basically built Bougle Run with no outside staff,” Hill said. “For example, once we had exposed sand, we had the housekeeping staff doing marram grass planting and they did a great job, restabilising banks and dunes.

“When COVID hit it was quite eerie because everyone was in lockdown, and in Tassie we got away with only a few cases, so we scaled back the maintenance on Dunes and Lost Farm because there were very few golfers.

“We utilised all of the greens staff off both courses, the bar staff, housekeeping and pro shop staff … we almost had a small army and, as a result, the course was built in 123 days.”

Coore’s Bougle Run design walks the tightrope of not being too hard for beginners and casual golfers, while remaining fun and challenging for the better player. In fact, the shortest tee on every hole has been purposely placed to allow players to use a putter only.

The 1st tee lies adjacent to the start of the Lost Farm course. The opening two holes lead you away to the edge of the massive sand dune next to Lost Farm’s 8th green, before a short uphill walk to the 3rd tee and the first of 10 holes laid out on top of a dune ridge. This is where the fun really begins. 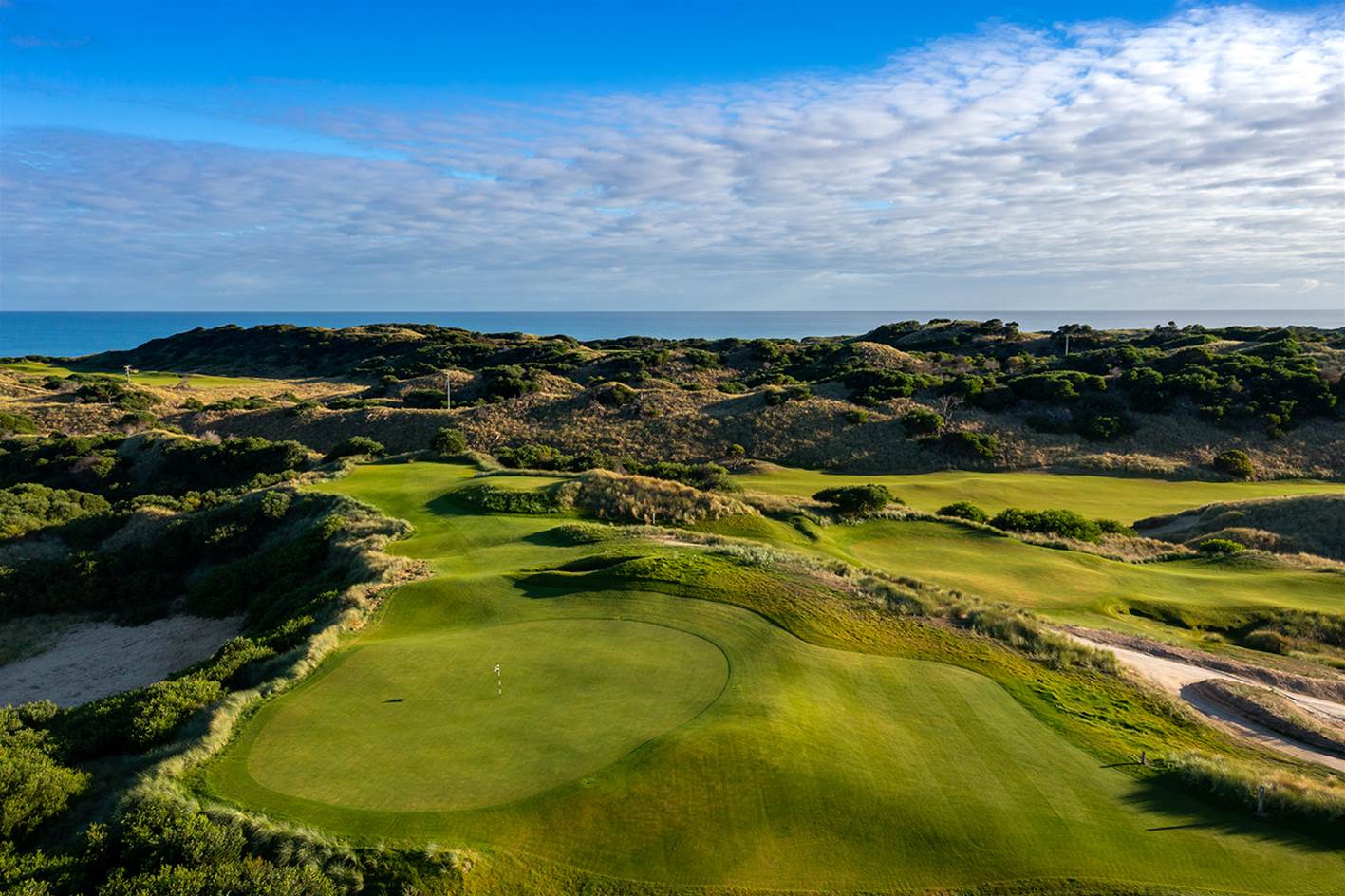 The wonderful dunescape of Bougle Run and Lost Farm in the background. PHOTO: Brendan James.

The 3rd is a spectacular little par-3 with steep dune slopes left and right as you play along the top of a ridge to a dramatic, undulating green. Four small, but deep, bunkers have been cut out of the dune and squeeze the entry onto the putting surface. Then you walk off the back of the green straight onto the 4th tee.

The 4th is one of only two par-4s on the course and at 253 metres, and slightly downhill, it is easily reachable. But it’s not that straightforward. The tee shot must carry a scrub-filled chasm to reach the fairway, which is littered with bunkers on a direct line to the receptive right half of the green. You can, however, play left off all the trouble but it will leave a more difficult short pitch to the flag.

A sandy gorge between tee and green is a feature of the next hole, which is little more than a good pitch in calm conditions. But this is one of the highest points on the course – compete with spectacular views over Lost Farm to the ocean – and with that comes the wind and the possibility of needing more than a wedge. It is an expansive green complex, with plenty of movement under foot, and four bunkers ready to catch even the slightest mis-hit.

Arguably my favourite hole is the downhill 10th, which I’m willing to predict will, over time, offer up the most holes-in-one ahead of any other Bougle Run hole. And it is a prime example of a hole design that identifies the smart player willing to not aim at the flag, to get close to the hole. The punchbowl green here is a beauty, with dramatic slopes feeding most into the centre of the almost-square putting surface. The centre of the green will likely host the flag on most days, which is why a deep pot bunker, just short of the fringe, is smack bang in line with the middle of the putting surface.

Remember the aforementioned Sattler/Coore checklist? They easily solved the accessibility conundrum as it is a short walk from the Lost Farm pro shop. Number three and four on the checklist accounted for.

I can testify here that Bougle Run is a ‘must-play’ once, twice or three times when you visit Barnbougle. You will have an absolute ball, so tick number one off the checklist.

As for checklist item number two – create the best short course in the world – only time will tell. As Coore’s creation settles and the playing surfaces mature it will only improve on being fantastic.