Adam Scott’s odds of winning a second Masters title have been slashed after his one-stroke Honda Classic victory over Spain's Sergio Garcia. 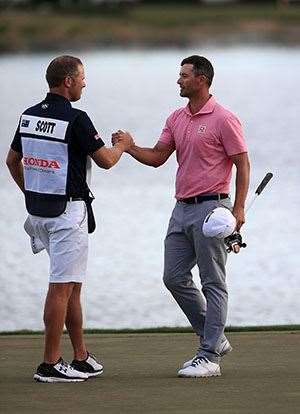 Adam Scott embraces his caddie David Clark after his one shot win at the Honda Classic.
PHOTO: Sam Greenwood/Getty Images.

ADAM Scott’s odds of winning a second Masters title have been slashed after he held on to win the Honda Classic by one stroke from Sergio Garcia.

It was the Queenslander’s 12th PGA Tour title and his first since winning the 2014 Colonial tournament and has elevated him back to No.9 in the world ranking. Sportsbet now have Scott listed at $17 to win a second green jacket, a week after he was $34.

The win came just a seven days after finishing tied second at Riviera and has the 35-year-old buoyant about his chances at Augusta National, with the Masters new just a month away.

“I’m thrilled at where my game’s at,” Scott said. “Hopefully I haven’t peaked too early. I know how to use the confidence of a win better now with my experience.

“Last week and this week’s a great test of golf, and I like where things are at.

“To come and win down the stretch at a course like this definitely has that major kind of feel where big questions are asked of your shots and there’s trouble at every point if you hit a bad one.

“Obviously, you want to go to the Masters feeling your game is in good shape.

“The key for me now is managing myself through this next run of big events and up to the Masters.”

Scott fired an even-par 70 in the final round to out-duel playing partner Sergio Garcia (71), who he shared the 54-hole total with.

The 2013 Masters Champion now boasts more PGA Tour victories than any other player aged under 40 currently playing on the PGA Tour – with Rory McIlroy on 11 wins and nine victories for both Bubba Watson and Dustin Johnson. 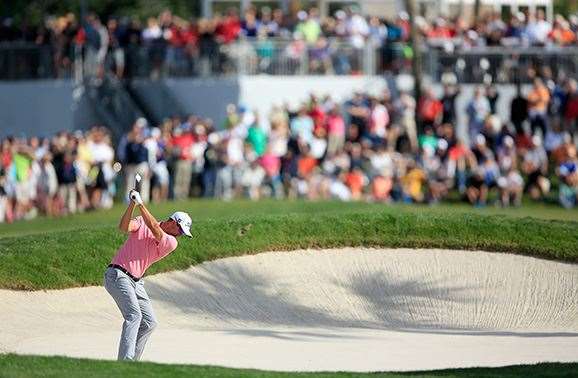 This victory not only gives him confidence for the season’s first major, it will go a long way to silencing any discussion and doubts about his enforced move to the short putter.

Winning the Honda Classic makes it eight top-10 finishes in Scott’s last 10 starts since abandoning the long broomstick putter (on the eve of the Presidents Cup last year) due to the January 1 anchoring rule change.

“It was certainly a sense of relief to win again,” Scott said. “If I can get better and better (with the short putter), then I like what’s to come.

“I’ve kind of said it the whole time; I don’t think it (putting) is going to be that big a deal for me. 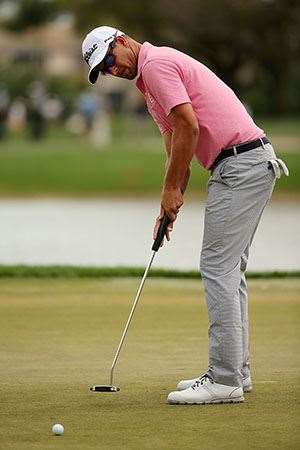 “It’s some hard work and I’m not afraid of that.”

Scott’s putting stroke came under scrutiny from golfing legend Jack Nicklaus, during a guest spot in the commentary booth at the Honda Classic.

"His stroke is terrific," the 18-time major champion said. "He looks great over the putter and he is making his share of putts. If you're putting like that all day, you're always going to make some putts."

Scott paid tribute to fellow Aussie touring pro Brett Rumford, who has also moved from a broomstick putter back to a conventional putter, for giving him a putting grip tip.

“I can’t take the credit for this grip,” Scott said. “Actually Brett Rumford, an Australian pro who plays in Europe showed me the grip and (it) felt good. It just felt right.

“Again, it’s not exactly the same as the grip with the long putter, but it’s very similar I guess in philosophy. It keeps all my angles and technical things in good order, so feels really comfortable.

“(It) just feels normal to me now. Again, it just reassures me I’m on the right track with the things I’m doing on the greens obviously and I’m just going to try and get better every week.” 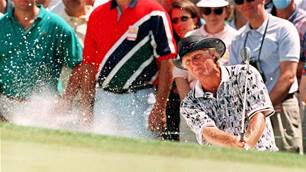