The leading players from England and Scotland have had to defend their teammate selections on the eve of the World Cup of Golf, after criticism they overlooked better players to look after their mates.

Chris Wood (England) and Russell Knox (Scotland) have copped criticism in since their arrival in Melbourne for overlooking higher ranked players in favour of “their mates” as they prepare for the Cup, which starts at Kingston Heath tomorrow.

Under the selection rules for the World Cup, the highest ranked player available from each of the 28 countries competing, is given the responsibility to select their teammate for the tournament, which comprises two rounds each of fourball and foursomes play.

The English pair was only decided upon in the past two weeks. Masters Champion Danny Willett was due to compete alongside former World No.1 Lee Westwood, but he withdrew from the event to recuperate from a back injury. With the next highest ranked Englishman, Justin Rose, also taking time off to recover from a back ailment, World No.37 Wood was enlisted. Instead of selecting the already prepared Westwood, who had flights booked from Dubai to Melbourne, Wood opted to pick his good mate Andy Sullivan, which has apparently left Westwood seething.

“I can understand Lee’s frustration after being named in the team, but it was Dan that pulled out which affected him and nothing to do with me.

“Dan got the choice to pick two or three months ago and he looked past the likes of myself, Sully, Fitz (Matt Fitzpatrick), Tyrrell Hatton to go to pick Lee. Now I'm sure all of us felt a little bit frustrated by that, but nothing was made of it.

“At that point I was the next guy in line and I had gone down the rankings. Sully was the guy behind me and that was the way to do it.”

Wood said his decision to choose Sullivan was based on form and their long friendship.

“You're playing a team event, you want to play with someone that you get on with, that you really gel with,” Wood said. “We've known each other since we were probably 15, played amateur golf together, came up through England amateur golf together, got our cards on Tour within maybe a year or so of each other and obviously played Ryder Cup this year.” Sullivan ticked all the boxes, according to Wood. PHOTO: Quinn Rooney/Getty Images.

American-based Scot Knox has also been criticized for his pairing selection of World No.315 Duncan Stewart, who was a roommate at Florida’s Jacksonville University.

Knox overlooked countrymen Martin Laird, Richie Ramsey, Marc Warren for the lower-ranked Stewart, who has been playing on Europe’s Challlenge Tour in 2016.

Stewart worked in an abattoir and as a delivery driver after his initial attempts to get on Tour failed, before taking out a bank loan to finance a tilt at the European Challenge Tour. It was a move that paid off as he won once and earned a card for the 2017 European Tour season.

Knox said he had done nothing wrong and his long-time friend deserved the spot and he hoped it would give Stewart’s career a boost.

“Duncan and I are obviously best friends but I didn't pick him because he's my best friend. I think Duncan deserves to be here as much as anyone else,” Knox said.

“He's had an unbelievable year. He's earned his way onto the European Tour through the Challenge Tour. He won a tournament. Other than myself, and probably Colin Montgomerie, he's the only other Scot to have won a tournament, which is massive.

“So I definitely didn't pick him because he's my best friend. I mean obviously he is, but he earned his right to be here, I think." – Russell Knox.

“I did nothing wrong picking him. I mean, if people who complained complain about the format of the pick, I could pick anyone in the top-500 in the world and I did. I don't really care what other people think.”

Stewart admitted he thought Knox was joking when he told him he was his World Cup selection.

“I'm just happy to be here. It's been a good year for me as well, my best year I've had. So we're both playing well,” Stewart said.

“And when Russell first mentioned it, I kind of thought he was a little bit joking when I was out at the Irish Open, he texted me in August, the week he won the Travelers, and I've been buzzing ever since to get here. "I did nothing wrong," Knox explains during the Scottish team press conference. PHOTO: Quinn Rooney/Getty Images.

“Any chance you get to represent your country, it's a great honour, and in the team format. When you're teaming up with one of your best friends, we're going out there to have a lot of fun and hopefully we can have a good week.”

Speaking at Kingston Heath this morning, PGA Tour Commissioner Tim Finchem weighed in to the controversy on team compostion saying the current rules around selection gave more teams a chance of winning.

"I know there have been some questions raised about the way the field is composed in terms of selecting your teammate, and we like that process," Finchem said. "You could probably point to this situation, that situation and raise a question.

"But generally it leads to players being more ... they're coming in here with a chance to win given the compatibility of who they're playing with." 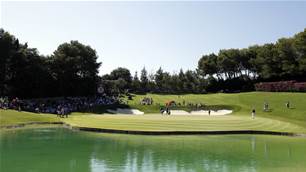 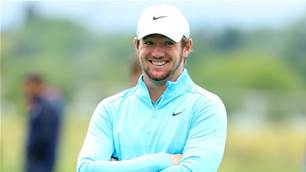