Tom Brady delivered the shot of the match but Tiger Woods didn't miss a fairway to earn a measure of revenge against Phil Mickelson as he teamed with Peyton Manning to win “The Match: Champions for Charity”.

The PGA Tour is set to return in just over two weeks and it has a tough act to follow after Woods lagged a long birdie putt on the 18th close enough to secure a 1-up victory for his pairing.

"Knowing US$20 million was raised and helping people going through tough times, it was an honour to be invited," Manning said.

"It's something I'll always remember."

RELATED: Take a look inside Woods and Manning's winning bags

This made-for-TV exhibition surpassed 2018's "The Match" in which Mickelson defeated Woods in a playoff under lights.

With two NFL greats along for the ride this time, the spectacle at Medalist Golf Club included World No.4 golfer Justin Thomas pitched in as an on-course reporter, bringing a mixture of humour and insight.

Woods and Manning took the lead on the 3rd hole and never trailed, building a 3-up lead in fourballs on the front nine.

It was a closer battle coming home played in modified alternate shot format. 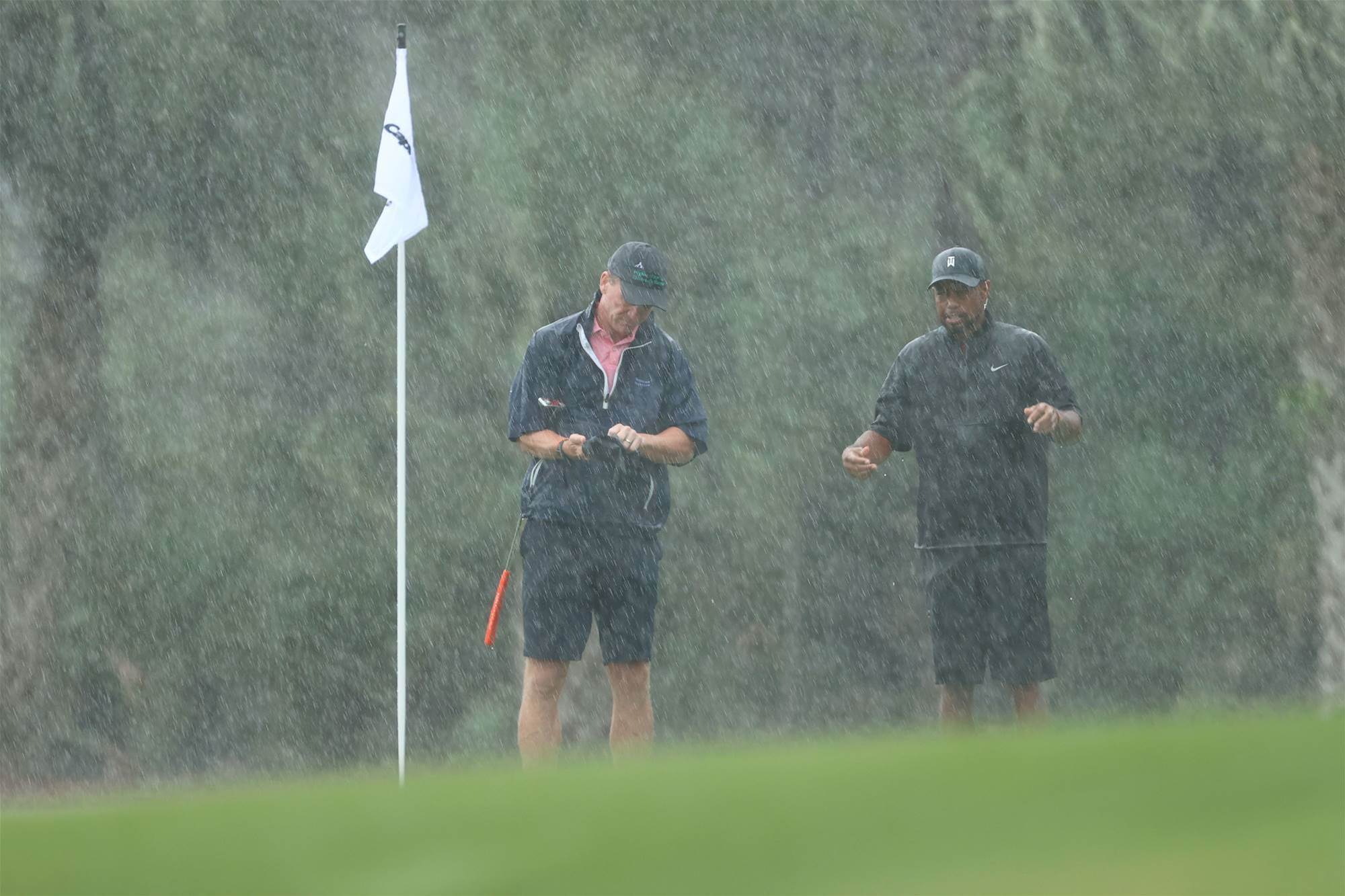 Manning and Woods react to the rain on the 13th green. PHOTO: Mike Ehrmann/Getty Images.

Brady struggled for most of the day, particularly early, and took a beating on social media and in the broadcast booth from NBA legend Charles Barkley, while Brooks Koepka offered $100,000 if the six-time Super Bowl champion could just make a par.

One shot shut everyone up.

With his fourth shot on the par-5 7th from the fairway, with Barkley needling him relentlessly, Brady's shot landed beyond the pin and spun back into the cup.

"That's why you're the goat," Barkley responded.

The entertainment didn't stop even as the rain, which caused a 45-minute delay at the start, returned.

Woods was playing for the first time since mid-February but his game was sharp, as were his words.

Mickelson on the 5th hole asked Woods to mark his ball from some 80 yards away.

"You want me to mark with a US Open medal," Woods, a three-time champion of the only major Mickelson hasn't won, responded.

"Do you have one? I have some silver ones," Mickelson said, referring to his record six runner-up finishes.