Just about the first text Minjee Lee received as she got doused in champagne on the 18th green at the Evian Resort Club after her maiden major title triumph came from Australia's greatest woman golfer.

Karrie Webb, seven-time major winner, understood best what a moment Sunday's amazing Evian Championship comeback triumph was for the Perth player who'd tried, tried and tried again to rid herself of the 'nearly woman' tag in the majors.

Sure, everyone in golf felt Lee, though still young at 25 but having been seemingly around forever, really deserved to join Australia's crew of women major winners alongside Webb, Jan Stephenson and Hannah Green.

But sometimes you don't get what you deserve in this sport. Lee and Webb together at the International Crown in 2014. PHOTO: Rob Carr/Getty Images.

Lee herself, though five times a winner on the LPGA circuit, had previously never won in 36 majors stretching back seven years, as she arrived at the spa resort of Evian-les-Bains with 10 top-12 and two top-three finishes to her name down the years.

Asked if the pressure of that unwanted tag of being the best not to win a major had begun to weigh on her, Lee reflected after her win on Sunday: "You know, I always have high expectations for myself – so maybe in that sense, yes.

"Like I put a lot of pressure on myself to perform, and I hear so many people say, 'We really want to you win a major' and 'a major is just around the corner'.

"But it's easier said than done! And everybody is so good out here.

"So, it's just really nice to have a major title under my belt now. I've just been waiting for this for so long. It just feels unreal to have won."

Lee really belongs among the best, though – and even though she had no great expectations coming into the event, it was an astounding way to join the Aussie trio.

Wahooo! You little beauty @minjeegolf So happy for you! Enjoy the celebrations! Maybe someone can find you another huge bottle of @VeuveClicquot 🍾🍾🇦🇺🇦🇺🇦🇺🇦🇺 https://t.co/Am0zg3XWaq

"You know, they're just all amazing people, and amazing golfers too. It just has a really nice ring to it (being part of their winners' circle)," she smiled, having overturned a seven-shot final round deficit in shooting a flawless final round seven-under par 64.

She then fired a 6-iron 173 metres across the water at the first playoff hole to within a couple of metres of the pin to oust Jeongeun Lee6, who'd played magnificently for much of the week before a Sunday wobble.

It made Lee the first Australian to win at Evian since Webb herself in 2006, before the event was upgraded to 'major' status.

"Actually, she did message me straightaway," Lee said of Webb. "She messages me quite a bit ... it's just really nice of her.

"Over the years, she's been so supportive of my golf and just me as a person, so it's just been really nice to have her in my corner."

Lee's victory is a reward for years of dedicated work put in by her and her family, with her mum having been her first instructor and younger brother Min Woo Lee, one of the rising stars on the European Tour, being a constant source of friendly rivalry and motivation.

"Her work ethics are tough and she works so hard," said her admiring brother earlier this year.

"When I feel tired, I would stop. Her perseverance is amazing as she sticks with something that she needs to do and finishes it off.

"I really love that about my sister. It's been fun to drive each other on."

Now Min Woo has some catching up to do on big sister.

"They were all cheering for me, and were a little bit teary," said the new champion, who's going to join Min Woo back at their Dallas base for a brief celebration before flying off to Tokyo to try to win Olympic gold.

"The Olympics have been on the back of my mind since Rio, so I'm really excited to play and go out there and rep my country again." 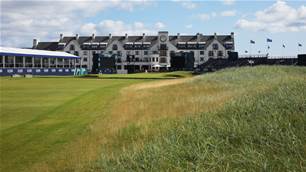