The world’s best golfers are able to hit fairway after fairway and green after green – but the game becomes infinitely more entertaining when they are making mistakes ...

Terrible lies, obstructions and blind shots force players to use their imaginations and have helped to create some of the sport’s greatest moments. Here are 10 of the best recovery shots from the past 25 years.

During extra holes with Louis Oosthuizen at the Masters in 2012, Bubba Watson pulled his tee shot into the trees off the 10th tee and appeared to have ended his chances of winning the green jacket.

The big left-hander had 155 yards to the hole as the crow flies – but his line was impaired by trees, spectators and TV towers. Nevertheless, Watson, one of the game’s most creative minds, was quick to settle on his 52-degree gap wedge and proceeded to hook his ball some 40-50 yards onto the green to 15 feet.

After nearly 20 minutes of deliberation, Jordan Spieth played one of the best recovery shots in Open Championship history at Royal Birkdale in 2017.

The American’s tee shot had sailed nearly 100 yards offline over the massive dune lining the right side of the 13th fairway.

After taking an unplayable lie, Spieth found himself on the driving range looking for line-of-sight relief – but he still had equipment trucks to contend with.

Despite initially hating the shot, Spieth’s ball flew over the range, over the dunes and back onto the fairway, allowing him to get up and down for bogey on his way to lifting the Claret Jug.

American Bill Haas played an incredible recovery shot out of a greenside water hazard in 2011 to win the Tour Championship and FedExCup.

The shot has since been dubbed the $10 million shot and came on the second playoff hole against Hunter Mahan at East Lake.

Haas, 29 at the time, was certain his approach into the 17th had found water. Upon arrival, however, Haas realised his ball was only half submerged and decided to blast it out of the hazard and onto the green.

“You play it like a bunker shot, for those of you that want to know, if there's a little bit of water, if you don't mind getting your feet dirty, and then blast it out of there. It came out perfect. Lucky,” said Haas, who won the playoff with his par on the next hole.

Sergio Garcia announced himself to the world when he sliced his 6-iron off of tree roots and onto the green during the US PGA Championship in 1999.

The 19-year-old Spaniard, who would ultimately finish runner-up to Tiger Woods, had only recently turned professional – but he was already exciting fans with his animated personality and creative shot-making.

One particular shot, however, will be remembered above all others and came on the 16th hole at Medinah Country Club. Garcia’s ball was resting against tree roots to the right of the fairway, with the putting surface over 180 metres away.

“El Nino” aimed left, closed his eyes upon impact and raised his left leg to produce a low, piercing slice that found the left portion of the green. If the shot wasn’t memorable enough, his reaction certainly was …

Another memorable shot produced by a 6-iron came at the Masters in 2010 when Phil Mickelson decided to attack the 13th green from the pine straw.

The left-hander played an unbelievable, 188-metre shot that pierced a small gap between two trees before travelling downhill, over water and onto the green to four or five feet.

“Lefty” may have missed the resulting eagle putt – but he still managed to defeat Lee Westwood by three shots and don his third green jacket.

In 2014, during the Volvo Golf Champions at Durban Country Club, South African Charl Schwartzel very nearly holed out from the cart path.

The miraculous, 140-metre approach shot came after an errant drive and flew right-to-left over several trees at the par-4 16th hole.

The most interesting man in golf found himself in a spot of bother during the third round of the Open Championship on the Old Course at St Andrews in 2010.

With his ball resting against the stone wall at the difficult Road Hole, Jiménez delighted spectators by playing an impressive bank shot that found the green.

In the process of winning his first PGA Tour title at the Waste Management Phoenix Open in 2012, American Kyle Stanley played a crucial escape shot at the short par-4 17th hole.

With his ball resting under cactus to the right of the green, Stanley somehow managed to squeeze an approach to 15 feet and save his par.

Like Jiménez – and so many players throughout history – Greg Norman found himself in trouble at the Road Hole during the Open Championship on the Old Course at St Andrews in 1995.

The Shark’s ball was resting close to the stone wall to the right of the green. But Norman, who had the creativity to turn his back to the hole, ricocheted his ball against the wall and onto the putting surface before converting the resulting putt.

No such list would be complete without Tiger Woods. And his most recent act of escapology came last year during the second round of the World Golf Championships-Mexico Championship.

The 15-time major champion found himself in a bunker on the 9th hole, with the tree line directly in between his ball and the hole. Not to worry …

Woods aimed left before unleashing a spectacular 9-iron – complete with samurai sword follow-through – that cut from left to right towards the green.

The shot got better and better after pitching on the left shoulder of the putting surface, spinning sharply towards the hole. 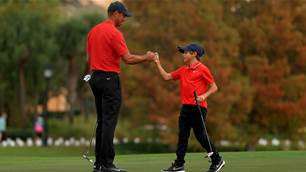 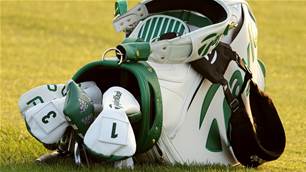