Temperatures crept into the mid- to high-80s on Monday for the first round of stroke play in the 119th US Women’s Amateur Championship at Old Waverly Golf Club. But the sweltering heat and humidity didn’t seem to bother cool veterans such as Andrea Lee and Alabama native Michaela Morard.

Lee, the No.2 player in the Women’s Amateur Golf Ranking™ and a Stanford University senior; and Morard, 17, of Huntsville, each carded five-under 67s to share the lead after Round 1.

Lee, a member of the 2016 and 2018 USA Curtis Cup Teams, made five birdies over her first nine holes – Old Waverly’s inward nine – and then came home in even-par 36. Morard, who plans to attend the University of Alabama in 2020, finished with four consecutive birdies from No.15, including a six-footer on her closing hole.

“Yeah, just getting through stroke play first because once that part of the competition is over it’s pretty much anyone’s ballgame,” said Lee, whose best finish in five previous US Women’s Amateurs is the semifinals in 2014 at Nassau Country Club in Glen Cove, N.Y. “Match play is a whole different type of tournament, so it’s going to take a lot, and I’ve just got to dig deep and stay really patient throughout the week, and hopefully win a few matches.” Once Morard, who was just named to the 2019 USA Junior Solheim Cup Team, straightened out her driver on the inward nine, she started giving herself more chances.

RIGHT: Morard shares the lead with Lee after the opening round of the US Women’s Amateur Championship. PHOTO: Atsushi Tomura/Getty Images.

She nearly reached the par-5 15th in two – she got up and down for birdie – then knocked a 6-iron approach from 155 yards to four feet on No.16 to set up another birdie. On the 136-yard, par-3 17th, Morard’s 8-iron into the wind stopped three feet from the flagstick. On the closing hole, she hit a three-quarter 8-iron from 139 yards to six feet.

“On the back nine … I figured out how to keep my foot down in my swing, which I wasn’t on the front, and then I started hitting fairways, which gave me good shots into the green,” said Morard, who lost in the Round of 32 in the US Girls’ Junior two weeks ago when Rose Zhang played 8-under golf over 12 holes. “And then I started just hitting them to like three or four feet and then making putts.”

Lauren Hartlage, 21, of Elizabethtown, Ky., who started on No.10, finished one stroke back, duplicating what Morard achieved over the last four holes of the inward nine. But after making the turn, Hartlage played the final nine holes in even-par 36. The University of Louisville senior was scheduled to defend her Kentucky Women’s Open title this week but qualifying for the Women’s Amateur changed her itinerary. Not that she’s complaining.

Four players posted three-under 69s, including Albane Valenzuela, 21, of Switzerland, the runner-up in 2017 and Lee’s Stanford teammate. Valenzuela, who qualified for her third US Women’s Open in June and shared low-amateur honours in the Evian Championship two weeks ago in France, played her final nine holes – Old Waverly’s outward nine – in three-under 33.

“I started hitting my driver a little bit better and my irons were probably a little closer, too,” said Valenzuela, who was one of two amateur golfers to represent her country in the 2016 Summer Olympics. “I think the back nine is a little bit more challenging on this course, maybe a little bit trickier holes, and I was in the rough two times, so that penalised me.” 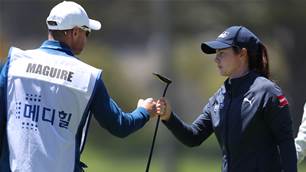