Martha Leach, of Hebron, Ky., who is competing in her 71st USGA championship, shot a second-round 73 on Sunday for a 36-hole total of one-under-par 143 to earn stroke-play medallist honours in the 58th US Senior Women’s Amateur Championship at Cedar Rapids (Iowa) Country Club.

Leach, 57, the 2009 US Women’s Mid-Amateur champion, edged Ellen Port and Mary Ann Hayward of Canada by two strokes for the No.1 seed in match play, which begins on Monday. Port, of St. Louis, Mo., a seven-time USGA champion, and Hayward, the 2005 US Women’s Mid-Amateur champion, completed two rounds at one-over 145. It was Leach’s first medallist honour in her 71 USGA championships – and while it’s a proud accomplishment, it’s sometimes seen as unlucky.

“I’m not low, am I?” Leach joked after she completed her round, in which she played with Hayward and 2002 US Women’s Mid-Amateur champion Corey Weworski, who finished alone in fourth place at two-over 146. “Nobody really wants it. My compadres today were hoping that I got it and they didn’t get it.”

While it was Leach’s first time as medallist, it’s not her first medal. The younger sister of six-time USGA champion Hollis Stacy, she edged out her sibling last July in the inaugural US Senior Women’s Open at Chicago Golf Club, finishing in a tie for 10th and earning the silver medal as the low amateur. She will begin match play at 7:30 a.m. CDT on Monday against No.64 seed Jane Curtin, of Silver Spring, Md., who made it into the bracket in an 8-for-5 playoff on Sunday evening.

“It was a good 73 today,” said Leach, who works as a realtor. “I didn’t put any stress on myself, so that was a positive. I didn’t hit it as well as yesterday, but coming down the last four holes I found the form I had yesterday, so that was encouraging.”

Like Leach, Port shot three strokes higher on Sunday (71-74). The St. Louis native, who won this championship for the fourth time in 2016, rallied with birdies on four of her last seven holes after struggling a bit at the start of the day.

“I was quick on some swings; my tempo was off on a couple of wedges,” said Port, 57. “And I yanked a pitching wedge from the middle of the fairway on No.14 to make a double. But today was about learning from my mistakes, which I love. [Defending champion] Lara Tennant missed more greens today and it was actually serving her well. You’ve got to get a feel for the golf course.”

Tennant, who was co-medallist and No.1 seed in 2017 and defeated Sue Wooster last October at Orchid Island for the title, is the No. 5 seed after rounds of 70-78. Hayward, a four-time Canadian Women’s Amateur champion, is the No.3 seed and Weworski earned the No.4 seed. 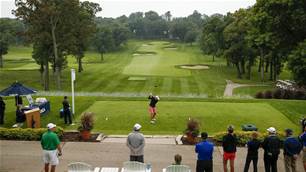 US Senior Women's Amateur: Round of 64 results 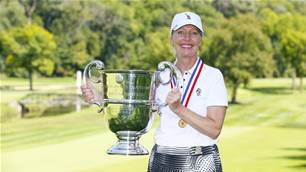 Tennant repeats as US Senior Women’s Amateur champion over Wooster 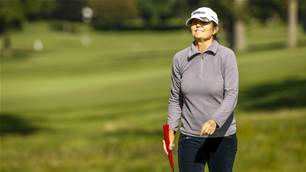