All that meant was avoiding a phone call from the captain, Steve Stricker, after the Tour Championship to inform him of being a pick.

Because of the pandemic that delayed the Ryder Cup one year until September 24-26, qualifying began the day Tiger Woods won the 2019 Masters.

It ended 28 months later with six players assured a spot at Whistling Straits, and the real drama still a week away.

Collin Morikawa, who won two majors during the qualifying process, topped the list.

He was followed by Dustin Johnson, Bryson DeChambeau, Brooks Koepka and Justin Thomas, all of whom had mathematically locked up their spots.

All six of the automatic qualifiers are ranked in the world's top-10.

Tony Finau was in the sixth spot until he was surpassed by Cantlay on Sunday.

Cantlay and Morikawa will be making their Ryder Cup debuts.

The US team has six captain's picks this year instead of four, a decision made during the midst of the pandemic and so much uncertainty about the golf schedule.

Cantlay was considered a certain selection even if he didn't make the team.

Same is the case with Finau, after he won The Northern Trust last week, Olympic gold medallist Xander Schauffele and Jordan Spieth. They are the next three in the standings.

Harris English, a two-time winner this year, is No.10 in the standings.

Stricker will make his picks official after the Tour Championship in Atlanta.

Among the candidates are Daniel Berger, Webb Simpson, Scottie Scheffler and Sam Burns, and the curious case of Patrick Reed, who had a big week without even playing at Caves Valley in the second week of the FedExCup playoffs.

Reed, who has a penchant for match play with his marvellous short game and relentless attitude, has been out the past three weeks, first with an ankle injury, then with what he described as bilateral pneumonia.

He faced long odds of being among the top-30 who advance to the Tour Championship, but it worked in his favour.

When K.H. Lee made a closing bogey from the middle of the 18th fairway at the BMW Championship, that allowed Reed to stay at No.30.

That means, if healthy, Reed gets a chance to play at East Lake Golf Club in what could amount to an audition for the Ryder Cup. 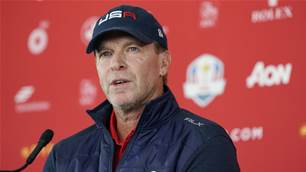 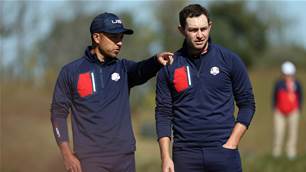 Rookie reliance pays off for U.S.