Tiger Woods will have his first crack at securing a record-setting 83rd PGA Tour victory in two weeks at the Farmers Insurance Open at Torrey Pines in San Diego, the former World No.1 says.

Woods, who tied Sam Snead at the top of the all-time PGA Tour wins list when he triumphed at the Zozo Championship in Japan last October, has won eight times at Torrey Pines with his most recent triumph there coming at the 2008 US Open.

The tournament, which will be held from January 23-26, has been Woods' regular first start to the year in the past. He joins a loaded field that includes Rory McIlroy, Justin Rose, Phil Mickelson, Jon Rahm and Xander Schauffele.

Woods announced his plans on his official Twitter account while also saying he will tee up at the February 13-16 Genesis Invitational, where the 15-time major champion is tournament host.

He finished fourth in the 18-man Hero World Challenge before posting a 3-0 record as a playing captain for the victorious US side at the Presidents Cup. 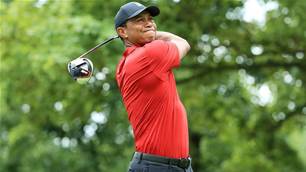