Justin Thomas is in the driver's seat to secure a US$15 million payday this week after his BMW Championship win sent him to the top of the PGA Tour's FedExCup standings.

Thomas began the final day at Chicago's Medinah CC with a six-shot lead and appeared shaky, but signed for a 68 and at 25-under-par (263) earned a three-shot win from Patrick Cantlay (65).

Japan's Hideki Matsuyama's stunning 63 left him in third at 20 under, while Queensland’s Adam Scott (67) tied for ninth at 14 under.

Thomas also shattered Medinah's course record with a 61 in the third round, eclipsing the 65 Matsuyama shot one day prior.

Former World No.1 Thomas secured his 10th PGA Tour title and first within 12 months, while moving up to World No.5.

"I was really nervous going into today, it had been a while (since winning)," Thomas said.

"I remembered how hard it is to win a golf tournament."

Thomas' win catapults him into the FedExCup lead and he will take a two-stroke lead into the start of the Tour Championship under its bizarre new format. The 26-year-old will tee off in the first round at the Tour Championship with a 10-under-par total.

From there, the winner claims the Tour Championship and the US$15 million bonus for the FedExCup title.

Thomas won the FedExCup trophy in 2017 under a previous format and pocketed a US$10 million bonus.

"I've never slept on a Wednesday lead," Thomas joked about starting a first round already leading.

"I think it has the potential to be extremely intense leaderboard come the final round.

"I'm going to try not to look at the leaderboards for the first couple days and just try to shoot as low as I can."

Meanwhile, Queenslander Jason Day's season is over with his tie for 52nd ensuring he is not among the top 30 on the FedEx standings who qualify for the Tour Championship.

Scott, 13th on the FedEx, and Leishman (21st) will be the only Australians in the field at the season finale at East Lake Golf Club in Atlanta. 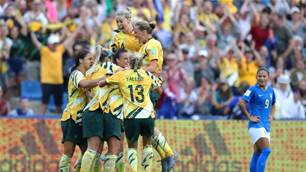 'The Chinese team will have to stay in isolation': Virus keeps Matildas' qualifiers in doubt