American ace Justin Thomas has backed Tiger Woods to pick himself on the USA's star-studded team to face Ernie Els' Internationals at this year's Presidents Cup.

Woods will captain the USA for the first time when some of the world's premier golfers flock to Royal Melbourne for the December 12-15 shootout.

The former World No.1 missed automatic qualification after a back injury restricted him to just six PGA Tour events since his stunning Masters triumph in April.

The 15-time major champion is now in the awkward situation of needing to use one of his four captain's picks on himself to feature in America's powerhouse line-up led by World No.1 Brooks Koepka, Dustin Johnson and Thomas.

Woods is certainly in a quandary, especially knowing fans would love him to play.

But Thomas was only too happy to offer up his thoughts when his captain reached out for advice.

"If he's healthy and he's playing well, I'd pick him a hundred times out of a hundred," Thomas said during a teleconference on Wednesday.

"I think he knows his body and knows himself well enough to make that decision.

"He's asked me about it and I've told him that exact same thing. It's all about health for anybody."

“If he's healthy and he's playing well, I'd pick him a hundred times out of a hundred.” – Justin Thomas

Regardless, a fellow former World No.1 now ranked fifth, is pumped to play under Woods.

"If you had have told me as a kid that I could play on presidents Cup team with Tiger Woods as a captain, I would probably have fainted or something like that," the 26-year-old said.

"So it's kind of surreal and I sometimes have to step back and realise what's happening, but I know that he's taking it very, very seriously."

With the USA winning eight of the past nine editions and tying the other since the Internationals last won the event at Royal Melbourne in 1998, the Presidents Cup has lacked the global prestige of the Ryder Cup featuring America against Europe.

The Internationals are once again very much the underdogs, given seven of the USA's eight automatic qualifiers are ranked in the top 12 in the world and the Internationals' top-ranked player, Adam Scott, is No.17.

"Both tournaments are bigger than yourself." 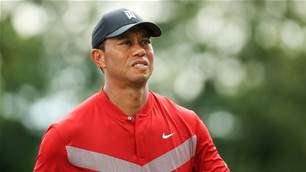