A Texas-based Australian swing coach, who once won US$1 million from Donald Trump, will use the PGA Tour's Byron Nelson event to sharpen up for next week's US PGA Championship.

Stuart Deane, a Brisbane native who is the teaching pro at Texas Star Golf Club, is about to kick off a huge two weeks of tournament golf.

Deane also secured a third trip to the US PGA Championship – to be held at New York's famed Bethpage Black course next week – when he was among 20 club pros to gain entry to the major via the PGA Professionals Championship earlier this month.

"This will be my fifth time competing in the Byron Nelson. It is always a privilege to play out there," Deane said.

"It (is) really cool to play the Byron Nelson and the PGA Championship in back-to-back weeks."

"I know people who work for the Trump organisation who joke with me, 'You're the only one who has got a cheque from the President’.” – Stuart Deane

Deane famously pocketed a US$1 million check from Trump a decade before he was elected as US President.

In 2006, holding no status on the PGA Tour or its second tier, Deane progressed through 54 holes of qualifying to win a sudden-death, nine-hole shootout at the Trump Million Dollar Invitational.

The made-for-television event was held on a Caribbean island.

"I know people who work for the Trump organisation who joke with me, 'You're the only one who has got a cheque from the President'.

"Mr Trump was great. I used to be able to call him on his cell phone and say G'day.

"He was incredibly gracious to me and everything I did, it was absolutely awesome." The $1 million helped Deane's attempt to secure a PGA Tour card, but injuries crippled his hopes before moving into golf teaching.

Deane recently resigned as director of golf coaching at the University of Texas at Arlington and is now the head pro at Texas Star Golf Course.

The 1990 Brisbane Golf Club champion will tee up in his third major next week, having qualified for the 2014 and 2017 PGA Championship.

Also in the Byron Nelson field, which is being held at the Dallas area's Trinity Forest Golf Club, is Victorian star Marc Leishman.

Leishman has been tipped to win by PGA Tour fantasy experts given he finished second last year and has five top-10 results this season. 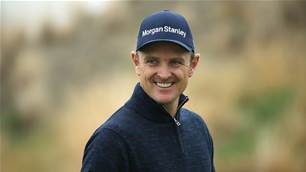