The Aussie summer of golf rolls on this week as the PGA Tour of Australasia heads a little over an hour out of Melbourne to the south east and Warragul Country Club.

The innovative Super 6 format utilises three rounds of strokeplay with the field cut to the top-50 and ties after 36 holes before the top-24 advance to Sunday’s six-hole medal match play showdown.

Played earlier this year after the second edition was cancelled in 2020 due to the pandemic, the Gippsland Super 6 is into its third year after two years at Yallourn Golf Club. 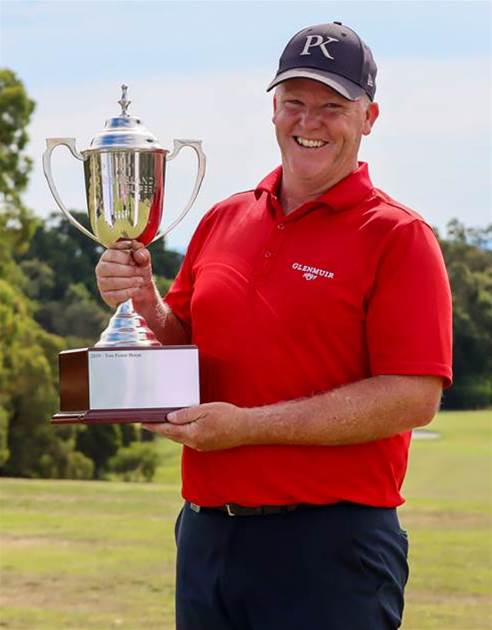 Fraser looked certain to be heading home in the second round when two down to Andrew Martin with two holes to play, before a three shot swing allowed him to advance. The now 43-year-old defeating fellow local Tour winners Josh Younger and Bryden Macpherson on his way to the final with Noseda.

RIGHT: Tour veteran Marcus Fraser claimed the Gippsland Super 6 back in January this year at Yallourn. PHOTO: PGA of Australia.

COURSE: Warragul Country Club takes the place of Yallourn as the host venue this year, with a new course setup presenting something of an unknown factor for the assembled field despite prior experience with a popular pro-am.

Tree-lined fairways and exceptional conditioning are the flavour of the day at Warragul, where the course has been reconfigured to play as a par-70 rather than its usual par-71 for this week and will measure 5,567 metres.

PLAYERS TO WATCH: In the preview of the Vic PGA last week, we listed Brad Kennedy as a player to watch despite his recent musings that his competitive career might be coming to a close in the not too distant future.

And the Queenslander did exactly as predicted and had done before, coming out firing, likely making him reconsider his thoughts of potential retirement.

Making his return after an extended period away from the game, Kennedy finished second by a solitary stroke to last week’s winner Blake Windred, making him certainly one to keep an eye on again this weekend as the Tour makes its way further east.

Kennedy’s fellow Queenslander Jake McLeod is another worth keeping tabs on this week at Warragul as he gears up towards the bigger money events on the local circuit in the new year. Fresh off a second place finish last week at Moonah Links after an extended break, Brad Kennedy is once again a player to watch. PHOTO: Sean M. Haffey/Getty Images.

McLeod won the NSW Open in 2018 and has been one of the more consistent performers at home in recent years, and has surely learnt a great deal about his profession and game over the last couple of years plying his trade in Europe.

The 27-year-old shared 41st last week, which may not sound like much, but after a year where he missed more cuts than he made, the boost in confidence provided by some weekend golf could see an even better performance this week.

McLeod keeps the ball in play and the layout at Warragul should suit his style of play, with the medal match play on Sunday also a format that will be meld well so long as he can advance past the two strokeplay cuts.

John Lyras may not be a particularly recognisable name for many, but this week could really suit the Sydneysider who has gained valuable experience this year in the States, including pre-qualifying for the PGA Tour’s AT&T Byron Nelson.

Lyras’ suitability here is based off his ability to go low, proven with his Monday qualifying on the biggest circuit in the world mentioned above, having achieved the same feat at the Australian Open a number of years ago.

The former retail worker at Power Golf in Sydney was T11 last week at Moonah Links, where a third round 76 cruelled his chances of truly contending on Sunday, and with his birdie ability, the sprint over three rounds to qualify for Sunday will suit. And birdies are key in six-hole medal match play.

Although the stocks of young Aussies worth watching here are high, keep an eye out for Peter Fowler this week, particularly if you are lucky enough to be on site at Warragul.

‘Chook’ was T36 last week and while a win might be a very long shot, his short game, arguably one of the best ever, could get him in contention and Fowler continues to work harder than just about anyone in the game. If you get the chance, keep a literal eye on Fowler and watch him grind on the practice facilities and manage his game and keep up with players more than half his age.