The PGA Tour returns to the Monterey Peninsula this week for the 80th edition of the AT&T Pebble Beach Pro-Am.

COURSES: For the past decade, the tournament has been held at the following three courses: Pebble Beach Golf Links, Spyglass Hill Golf Course and Monterey Peninsula Country Club (Shore Course).

The iconic Pebble Beach Golf Links – designed by Jack Neville and Douglas Grant in 1919 and renovated by Arnold Palmer and Thad Layton in 2016 – will once again be used exclusively for the final round. Runner-up here two years ago, Jason Day boasts an impressive record at Pebble Beach and kicked off his season in solid fashion two weeks ago, sharing 16th place at Torrey Pines. The former World No.1 has slipped to 46th in the rankings, however, and hasn’t won on Tour since May, 2018.

Graeme McDowell arrives in California in winning form after claiming his first European Tour title in four years in Saudi Arabia last week. The 40-year-old Northern Irishman enjoys golf on the Monterey Peninsula and won his US Open title at Pebble Beach in 2010.

Hard to look past Dustin Johnson here … The former World No.1 has two wins, two seconds, a third, a T4 and a T5 from his 12 appearances. The American finished runner-up to McDowell in Saudi last week and shared seventh place in Hawaii last month. 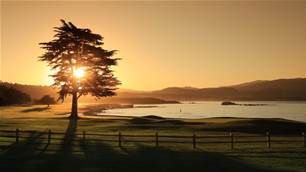