International Team captain Ernie Els is sticking to his guns before day two of the Presidents Cup matches, resisting temptation to keep any of his successful pairings together for tomorrow’s first foursomes session.

The big South African watched on in delight today, as four of his pairings got the better of some powerful American names on the Presidents Cup Composite Course at Royal Melbourne. But despite the Internationals’ unexpected 4-1 advantage, Els has stood strong and enforced his pre-tournament plans for tomorrow’s combinations.

“The guys played well today in their respective pairings – and tomorrow we've got whatever pairings we have,” Els said.

The first of those pairings will see former Cup veteran Adam Scott and South African Louis Oosthuizen join forces against Dustin Johnson and Matt Kuchar at 11:02am (AEDT). 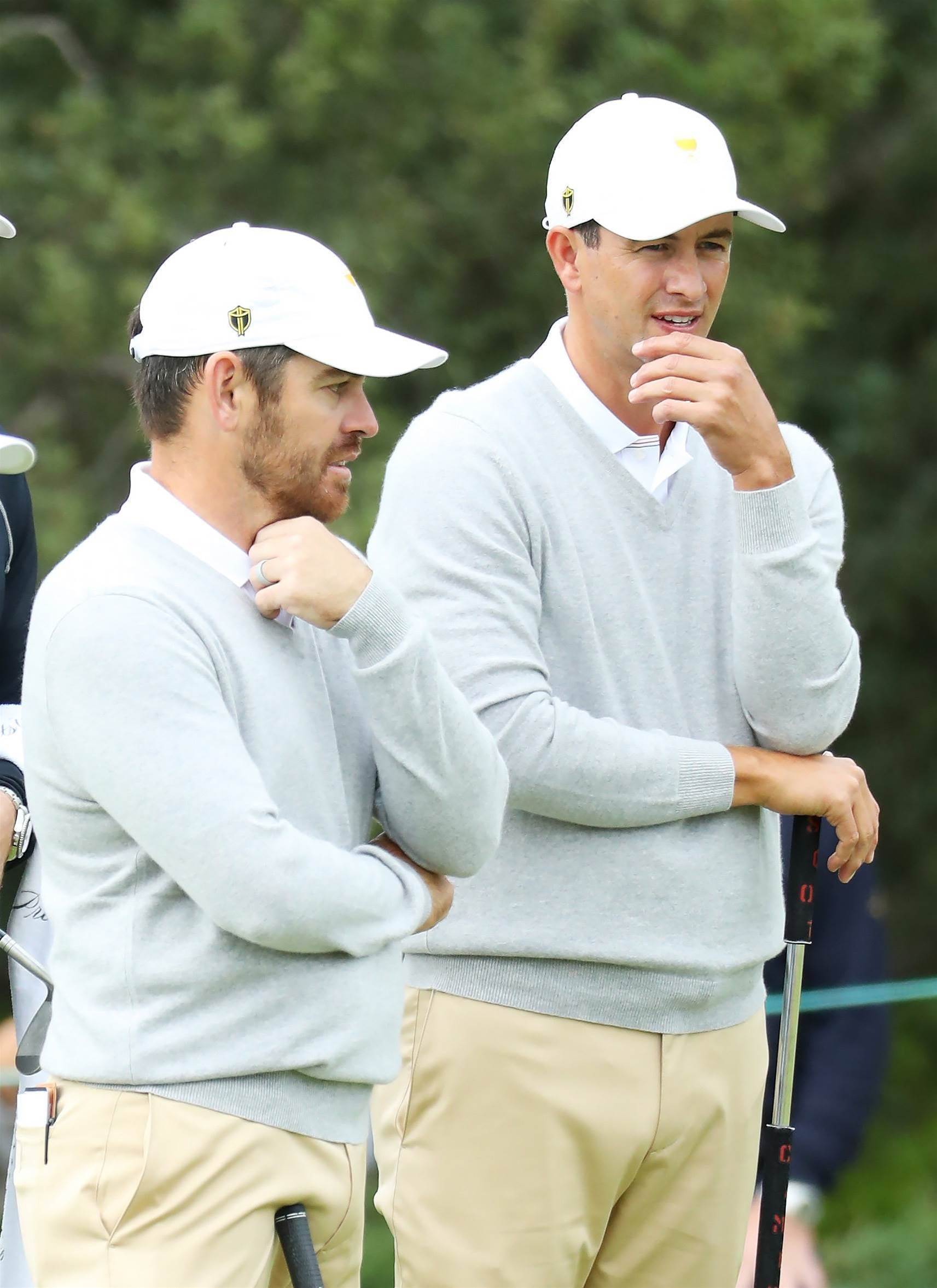 Scott played well alongside South Korean debutant Byeong Hun An in their victorious match over Tony Finau and Bryson DeChambeau today, while Oosthuizen combined well with Abraham Ancer in their 4 & 3 win over Gary Woodland and Johnson.

Scott has never played with Oosthuizen in eight previous Cup appearances – but both the close friends are world-class ball-strikers, and they should work well together if their putters manage to heat up.

Schauffele and Cantlay were paired together today – but they were unable to halve their match on the final hole against Hadwin and South Korean Sungjae Im.

“We have a couple different options rolling into this entire Cup … The guys have known the game plan, different possible options, and this is one of the scenarios,” Woods told the assembled media.

“This is a long four days. I mean, we have to go earn this Cup. Just because we lost the session doesn't mean the Cup's over. There's a long way to go. A lot of points available. The guys will regroup and we'll come out tomorrow ready to go.”

The third match of foursomes will see the losing pairing of Webb Simpson and Patrick Reed reunited, having never led in their four-ball match against Hideki Matsuyama and C.T. Pan on Thursday.

The most controversial figure at this year’s Presidents Cup and fellow major winner Simpson will take on Ancer and home town-hero Marc Leishman, who suffered the Internationals’ only defeat of the opening session alongside Niemann in the first match of the day against Woods and Justin Thomas. 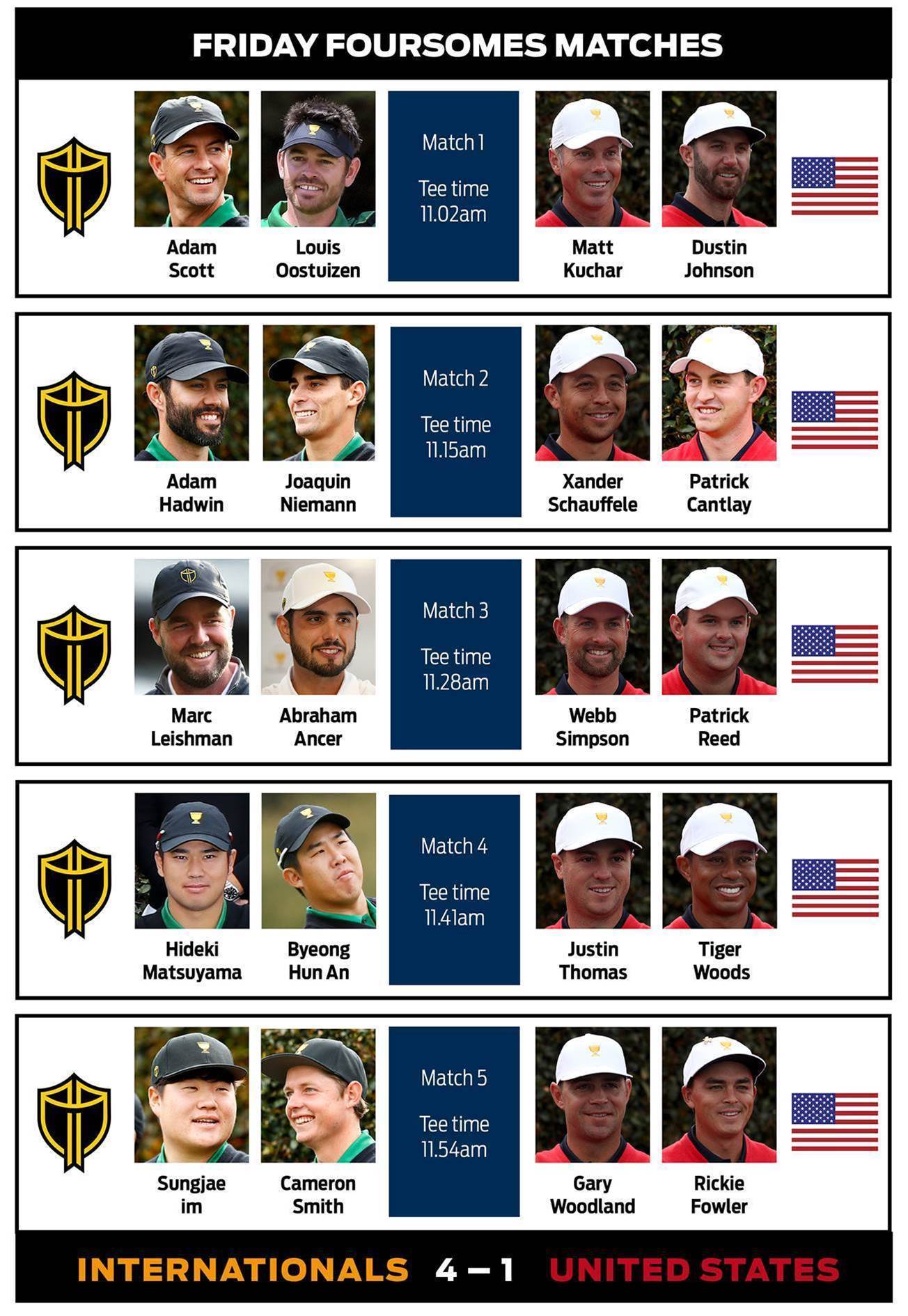 The announcement of the penultimate matchup on the competition’s second day saw no hesitation from Els, as he chose An and Matsuyama, who will face off with Woods and Thomas.

Having led off his team on Thursday, Woods admitted Kuchar and Johnson were always intended for the role on Friday, while his position was more fluid and based on opposition rather than timing.

“As far as the timing of when I went out there, it was based on, you know, what we thought would be best for the guys leading off playing in foursomes,” Woods said.

“We've had a thought process of this kind of going into it, and then basically who Ernie throws out there, and that's one of the reasons why this Presidents Cup is so exciting is that we're able to do things like this.”

Having secured their team’s lone point on Thursday, the Thomas/Woods pairing will be confident of continuing in the same vein. However, Matsuyama and An both won the majority of holes in their separate wins.

Cameron Smith will get his chance to make his debut on the course in the closing match on the second day.

The Queenslander will be joined by PGA Tour Rookie of the Year Im, who was very impressive in his first Presidents Cup playing action alongside Adam Hadwin.

Smith and Im will take on Gary Woodland and Rickie Fowler, the former in the anchor position for the second straight day, while his partner gets his first playing action of 2019.

China’s Haotong Li will sit out again on Friday, this time joined by Pan on the reserves bench, with DeChambeau – one of the last players on the range on Thursday – and Finau to fill the same role for the Americans.