Dr Alister MacKenzie never saw his completed Royal Melbourne design, which will host its third Presidents Cup matches this month. But the ‘Good Doctor’ would be delighted his creation is equally fun and challenging for the game’s greats and not so great players.

The question of Australia’s most underrated golf course is one often asked and Woodlands is probably at the top of most golfer’s lists. The best answer I’ve heard, however, is Royal Melbourne.

Underrated by who is, of course, the obvious next step.

Not by Nick Faldo who said: “The West Course at Royal Melbourne might just be the best golf course in the world, period.” Tom Doak likewise writes: “If I had to name just one course as being the best in the world, this might be the one, because all its holes are dramatic and yet it’s perfectly wide enough and playable for the average player.”

Fred Couples, a playoff loser to Rodger Davis in the 1988 Bicentennial Classic, is another big name fan. “St Andrews, Augusta and Royal Melbourne are my three favourite courses in the world. Like St Andrews and Augusta you can slam it almost anywhere off the tee at Royal Melbourne and you can still get to the green but putting is going to be crazy if you play it that way. It is really so dangerous around the greens and you can make bogey from anywhere. And when the wind blows its, ‘Oh my God! How do I manage this course?’” 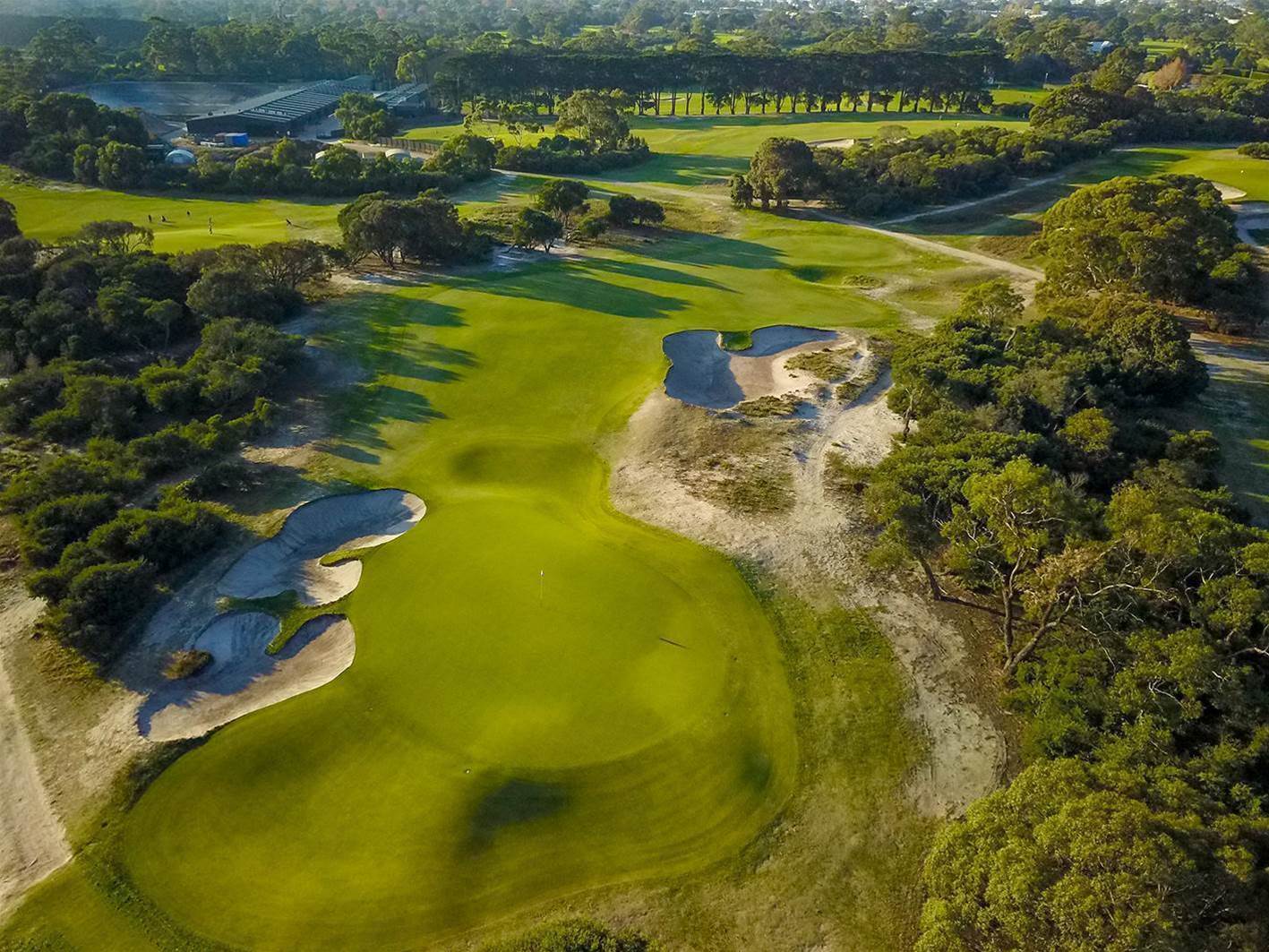 The West Course 10th, playing as the 6th on the Presidents Cup Composite Course 6th, is one of the world's great short par-4s. PHOTO: Brendan James.

Here, Doak and Couples get to the heart of what makes Royal Melbourne such a great course.

The holes epitomise the philosophy of its designer Dr Alister MacKenzie who argued: “Narrow fairways bordered by long grass make bad golfers. They do so by destroying the harmony and continuity of the game and in causing a stilted and a cramped style, destroying all freedom of play.”

MacKenzie understood difficult golf wasn’t necessarily good golf and the converse that easy golf wasn’t necessarily uninteresting or somehow lacking. Royal Melbourne’s West Course is far from being the most demanding driving course in the country, nor are its greens so small to make the approach shots overly difficult of just hitting the green is the measure. For a course designed to test championship play it’s one of the easier in the country for an 18 handicapper to play in even bogeys. But, you have to think and you have to be a competent short game player.

Royal Melbourne wants you to play with freedom and MacKenzie wanted golfers to enjoy the game, to play well and he detested the thought of them looking for golf balls, and hacking them out of, long grass. 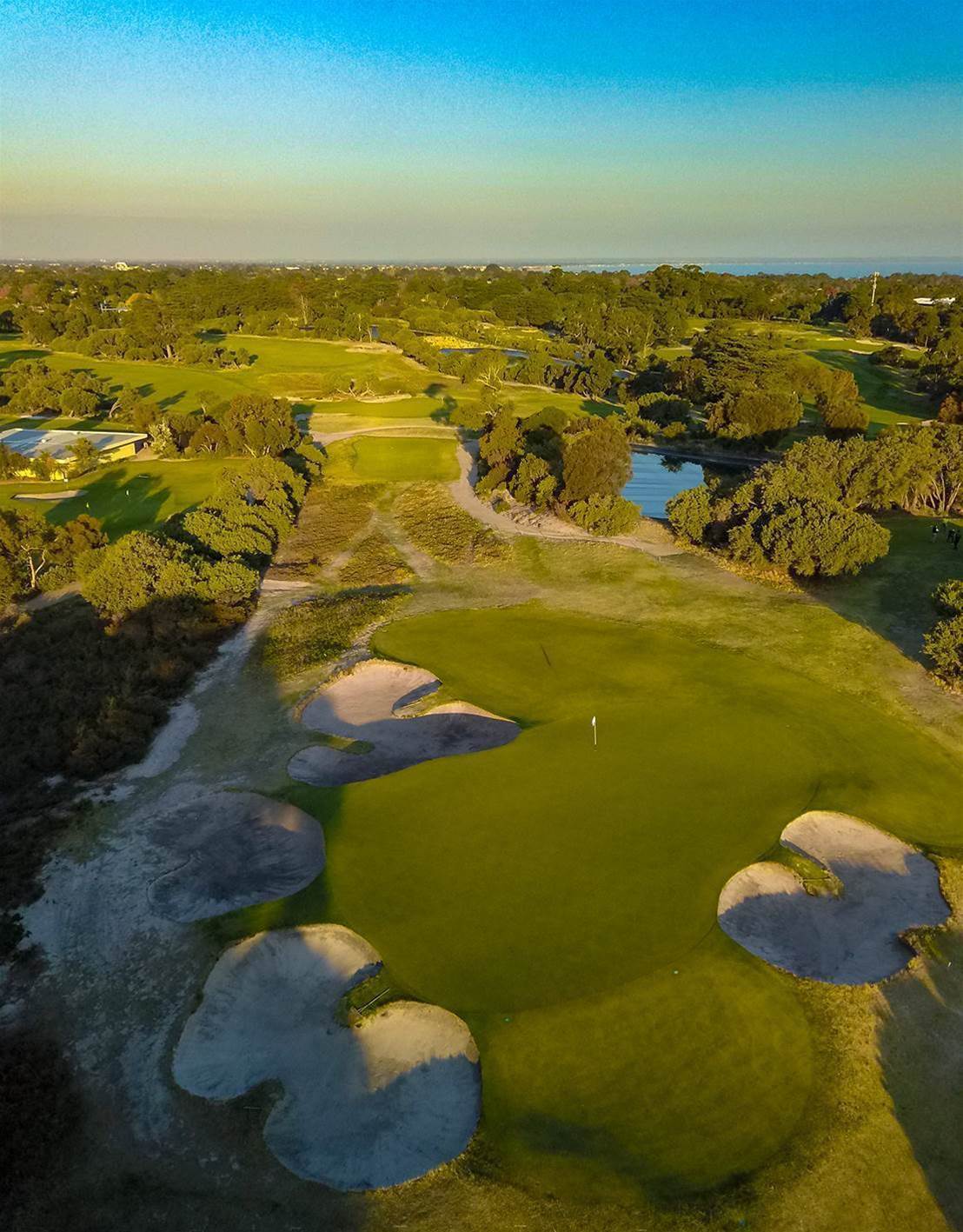 He understood attracting and retaining golfers was critical to the ongoing success of the game. “Unless we provide golf courses full of intricate problems, players will get sick of the game without knowing why they have got sick of it, and golf will die from lack of abiding and increasing knowledge,” he wrote.

RIGHT: The devilish short par-3 5th of the Composite Course. Fives and sixes here are as common as birdies. PHOTO: Brendan James.

Royal Melbourne is full of ‘intricate problems’ asking the thoughtful players to determine for themselves where best to play in order to simplify the next stroke.

Those less thoughtful think it wide open and ‘you can drive it anywhere.’ Many years ago one of Australia’s finest players (and one of its most underrated) told me, “Royal Melbourne would be great if they made the fairways 30 yards wide and grew the rough.” Unsurprisingly he was a straight hitter and no, it wasn’t Graham Marsh.

It’s hard for me to understand someone missing the point of the design by so much and MacKenzie would have pointed him to The Spirit of St Andrews, his seminal book on the subject of golf course architecture, and suggested it worthy of his study. Perhaps though the said player may have concluded he knew more about golf than the Scottish designer, a man who rescued golf architecture in this country from mediocrity with his three-month visit to our shores late in 1926.

Royal Melbourne ultimately is a great course because it is full of great holes – world-class, head-turning, memorable holes. 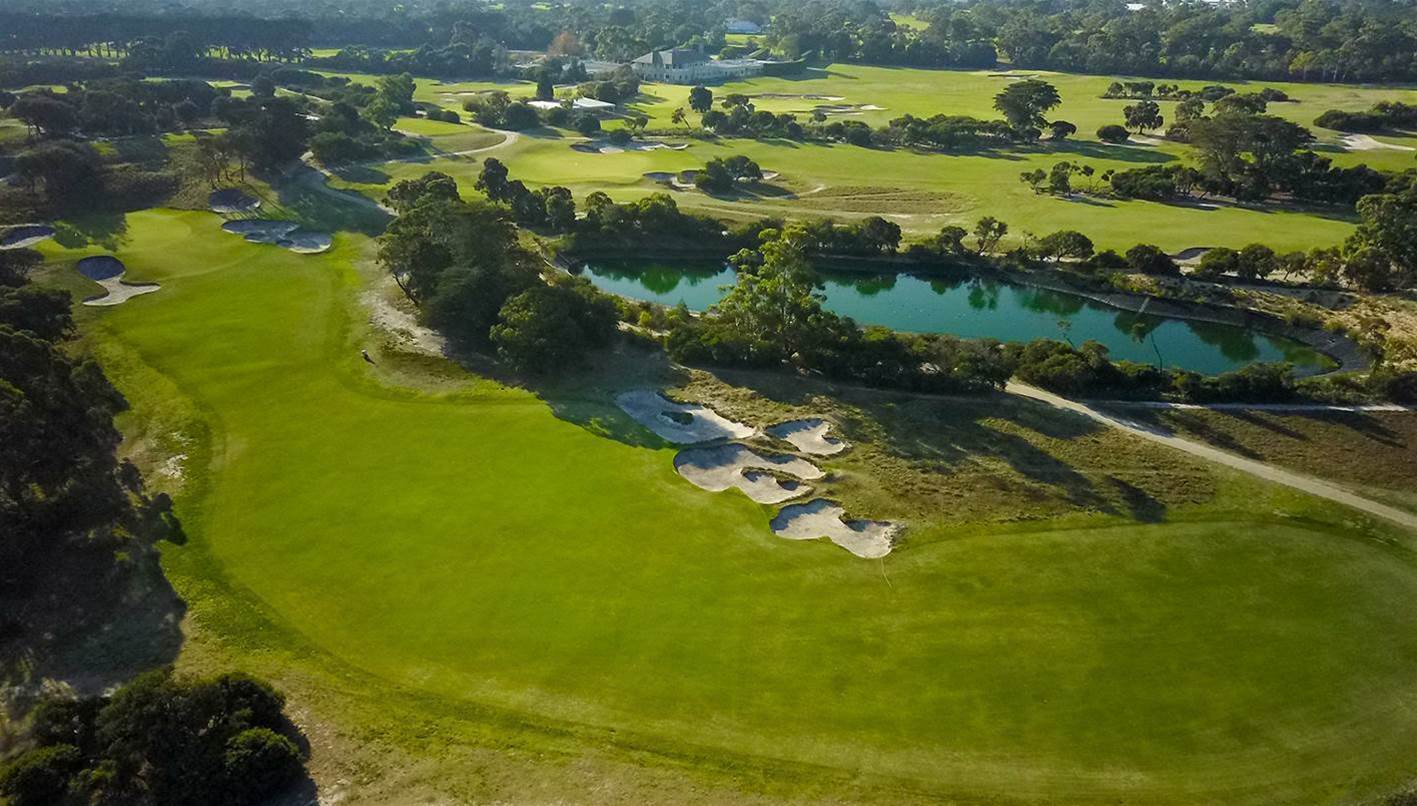 The famous 4th on the Composite Course is arguably the best dogleg par-4 in Australia. PHOTO: Brendan James.

Kingston Heath is the choice of more than a few as the best course in Australia and there can be no questioning of its brilliance but it’s strengths are more the sums of its parts – the beautiful bunkers, the always excellent conditioning, well-managed vegetation, a fine intimate routing making the most of a relatively small and quite flat piece of land, interesting, subtle strategies to be learned over time and a great set of greens.

"From the top of the hill, players face one of the great long second shots down the hill to the big green and the boldness of MacKenzie’s routing decision makes the brilliant, short 5th and the massive dogleg right 6th possible." – Mike Clayton.

Royal Melbourne has all of this but the routing sprawls over a huge piece of property and one with noticeably more interesting landforms better suited to the making of world-class holes, one after the other.

The pitch to the front-to-back sloping short par-4 3rd is vexingly difficult to get anywhere near the hole and it’s followed by the steeply uphill tee shot at the par-5 4th (No. 2 in the Presidents Cup) an often criticised shot by the unthinking, who fail to consider how the shot – one perhaps less than the ideal – sets up the extraordinary run of holes to follow.

MacKenzie was no great fan of blind approach shots but “a blind tee shot may be forgiven.”

From the top of the hill, players face one of the great long second shots down the hill to the big green and the boldness of MacKenzie’s routing decision makes the brilliant, short 5th and the massive dogleg right 6th possible. 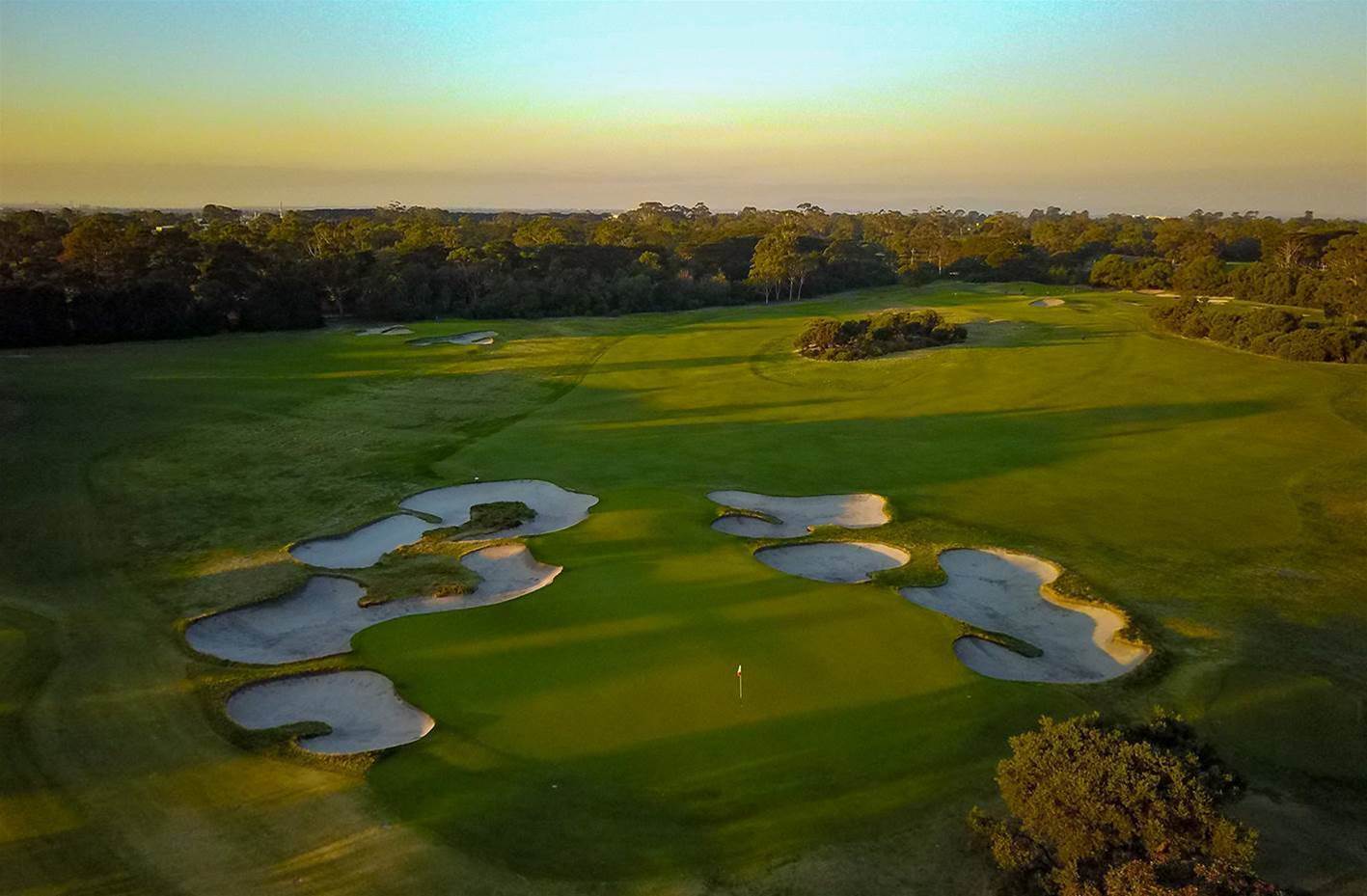 Royal Melbourne East's final hole is the 16th on the Composite and will be the scene of great drama this week. PHOTO: Brendan James.

The 6th is without doubt one of the best holes in the game, it’s boldness making it so much fun to play and the wildly differing quality of players attempting to solve its questions are offered multiples of choices of line and length and the green is full of Couples’ ‘crazy’ putts.

The run of holes from the 3rd to the 6th might be the best in the world although I wouldn’t disagree if you wanted to argue the case for 11 to 14 at on The Old Course at St Andrews.

Australia has perhaps the game’s finest collection of holes around 270 metres and the model is the 10th on the West. The green is easily reachable (for long hitters) but one brutally difficult to drive it onto the green. The irony is it’s easier to drive the green into the wind as downwind it’s all but impossible to keep the ball from going long and the sensible choice is to play safely right, avoid the pit bunker in the face of the dune, and pitch from there.

"MacKenzie would be delighted to know he’d conceived a golf course one can never tire of playing, something rare but something shared with The Old Course in St Andrews."

In 1978, the virtuoso Spanish player Severiano Ballesteros came to play the Australian PGA and each day he flew at the green (back in the day of persimmon and balata when driving was properly hard) and each day he found the sandy waste ground between the bunker and the green. From there the task of flipping a sand wedge by the hole was made to look easy enough by the possessor of the ultimate short game and three birdies was Seve’s reward for the week.

MacKenzie was an admirer of Walter Hagen and decades later Ballesteros was his incarnation. Obviously the architect never knew Seve but he was designing courses for him and he’d have adored both his audacity and his skill.

Nor should it be any surprise Ballesteros is the only man to have won at MacKenzie’s favourite course in St Andrews and arguably his two most famous courses at Augusta and Royal Melbourne. 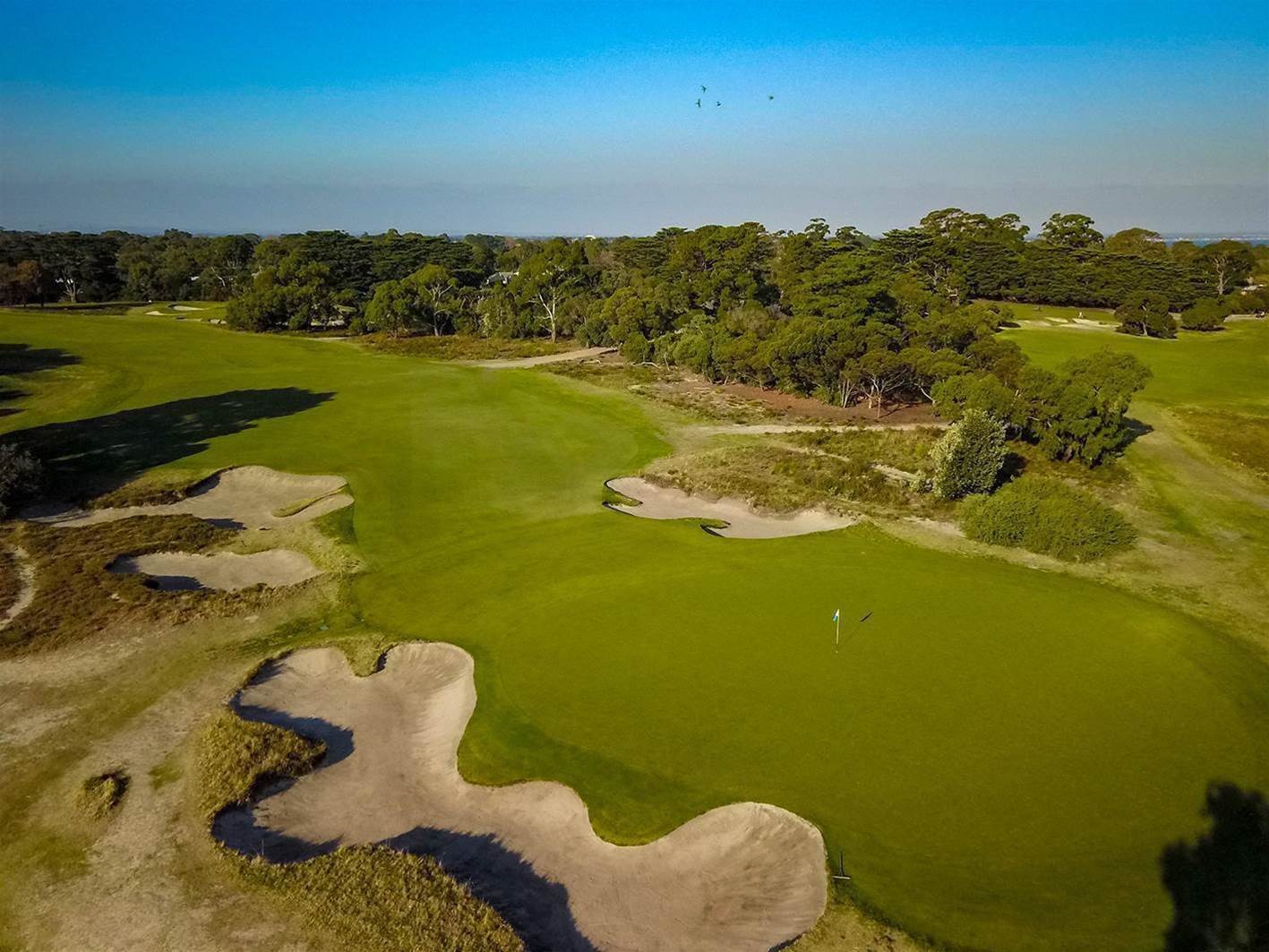 The Composite Course's 2nd hole is a reachable par-5 where eagles will be common ... so will bogies and doubles. PHOTO: Brendan James

The real measure of how underrated Royal Melbourne is amongst the wider Australian community comes from an unlikely source. John Carroll, a recently retired sociology professor at Latrobe University in Melbourne is a mid-handicap player but one with a great appreciation for architecture in general as well as a good understanding of what makes a great golf course.

He’s right. MacKenzie would be delighted to know he’d conceived a golf course one can never tire of playing, something rare but something shared with The Old Course in St Andrews.

Not every course can be Royal Melbourne or The Old Course but we can all learn their lessons.