Five players including young Sydney amateur Jeff Guan are on top of the leaderboard after the first day of the Nexus Advisernet WA Open at Royal Fremantle.

Guan, just 17 and already a two-time Australian Junior Champion, rattled around in a 66 late in the day to join professionals Dimi Papadatos, Austin Bautista and Nathan Barbieri in a cluster of New South Welshmen at the top along with local star Braden Becker.

Another WA pro, Rick Kulacz, and Queensland’s Douglas Klein are the closest challengers at five-under par after a day interrupted by heavy rain in the morning which flooded the greens and forced a temporary suspension.

Guan, meanwhile, had an afternoon tee time and played his round in glorious Perth sunshine, hitting it in tight at the first two holes for tap-in birdies to set his momentum at his first start since winning the Australian Junior for the second consecutive year and helping New South Wales to victory in the Golf Australia Interstate series outside Adelaide a fortnight ago.

The teenager from the inner-western Sydney suburb of Bexley, still completing year 12 studies at Endeavour Sports High School in Sydney, used the time after his triumphs in South Australia to hit the driving range. 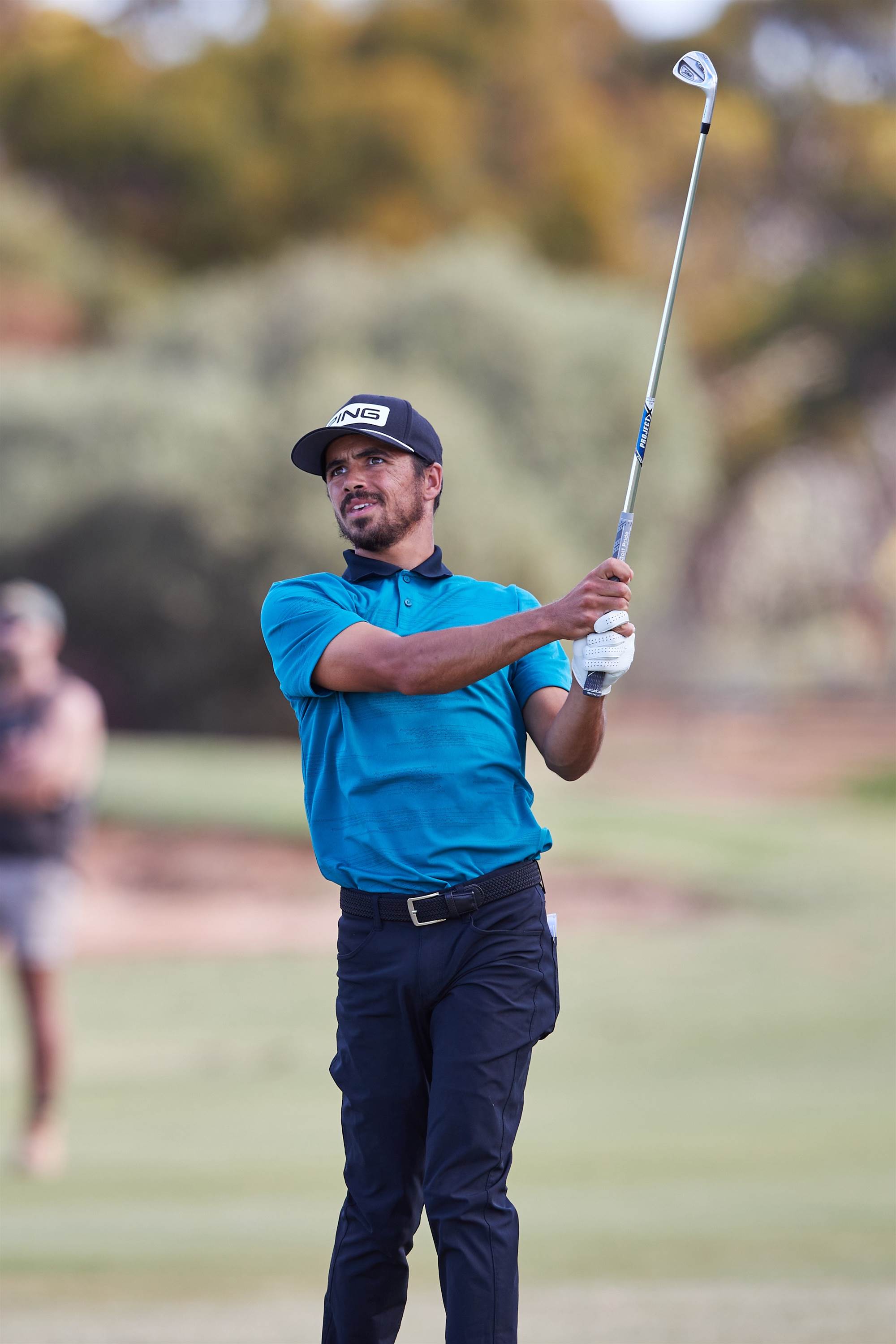 “It was a good time for me because I got to practise,” he said. “I haven’t really been practising much. I was practising my irons. I wasn’t hitting it that good at the Aus Junior, I just putted well that last day and got it done.”

Today his only mistake was a poor approach at the par-4 14th that left him with a plugged lie in the greenside bunker, leading to his only bogey of the day.

RIGHT: After his runner-up finish last week, Austin Bautista is in the hunt again this week. PHOTO: PGA of Australia.

Coached by renowned Sydney instructor Gary Barter, he has another trip to the United States planned this year with an eye on some of the big North American amateur tournaments. Meanwhile he has set himself up with a chance of a groundbreaking win, having made his first cut in a pro event at the NSW Open recently, and experience that he values.

“I think it (playing with pros) is really good for me,” he said. “I learn from them. They’re much more experienced.”

Papadatos was first out of the blocks in the morning, and although the heavy rain forced him to pause momentarily, the New South Welshman went bogey-free in his opening round, rolling in six birdies in a round that he characteristically described as “nice and boring”.

Significantly he is fourth in the ISPS HANDA PGA Tour of Australasia Order of Merit with just two events remaining, giving him a strong chance of jumping into the top three who earn DP World Tour status for next year.

“I’ve just got to have high results, do what I can and see how it pans out,” he said.

“I think it (playing with pros) is really good for me. I learn from them. They’re much more experienced.” - Jeffrey Guan.

Barbieri had two chip-ins, including one for eagle on the par-5 11th hole, in his 66. Runner-up in a tournament at The National in Victoria recently, he continues to grow as a player.

“Every week I’m getting more comfortable, and I’m loving it,” he said.

Bautista’s excellent opening round was significant since he was runner-up in Kalgoorlie last weekend, a result that left him fretting on the road back to Perth that night. But he has bounced back.

“The drive home was my moment to be upset and I was able to wash it out and move on,” he said. “There’s no need to hold on to a loss like that. It doesn’t help.”

Becker had six birdies, ran in a 10-metre bomb on the 17th, and enjoyed the crowd support with his girlfriend on hand and a few friends from Mandurah, his home club, too.

“I’m definitely a better golfer than I was five years ago, even two years ago with Covid,” he said. “That gave me a chance to practise the things that I was struggling with.”

The 29-year-old Becker is carrying the local hopes, and a win this week would be special. “It’s always nice to win at home.”

Becker gets a break and the WA Open trophy