Jason Day says his first top-five on the PGA Tour since last year's Masters is "bittersweet" having let slip yet another chance of securing a Pebble Beach Pro-Am victory.

Day started a breezy final round three shots off the lead but a three-over-par 75 left him in fourth at 11 under – eight shots adrift of Canadian winner Nick Taylor.

Overnight leader Taylor shot 70 to finish at 19 under, for a four-shot victory that gets him into the Masters for the first time, along with the US PGA Championship in May.

American Kevin Streelman (68) was second while Phil Mickelson (74) was denied a record sixth title at the event and finished third at 14 under.

Day has now finished in the top-five at Pebble Beach five of the past six years without hosting the trophy on the iconic Monterey Peninsula.

He owns an astonishing seven top-six results in 11 starts at the tournament since 2008.

"I don't know why," Day told AAP when asked why victory at Pebble Beach had eluded him so often.

"You have to string four really good rounds together and you're battling the elements.

"With that wind today, it was difficult to putt on those greens." Former World No.1 Day had not managed a top-10 on the PGA Tour since June and was without a top-five since sharing fifth at Augusta National in April.

His poor stretch of form resulted in him plummeting to World No.46 but his week's work in California lift him to 38th in the rankings.

"It's bittersweet, because I wanted to (win)," Day said.

"But it's still a good step in the right direction.

"You can find negatives in anything, but it's been a while since I've had a top five and it's a great result to have early in the year.

"I played well and it's a positive week."

Day will next tee up at this week's Genesis Invitational hosted by Tiger Woods, after a three-year absence from the event.

The tournament will be held at Los Angeles' famed Riviera Country Club, while it has been reduced to a field of 120 and given invitational status on the PGA Tour.

"After today, I'm looking forward to getting stuck into next week. I'm playing some good golf," Day said.

Next best of the Australians at Pebble Beach was Matt Jones (72) sharing fifth at nine under.

Aaron Baddeley (75) tied for 25th at four under while Cameron Davis (73, two under) and John Senden (83, five over) rounded out the Aussies contingent that survived the cut. 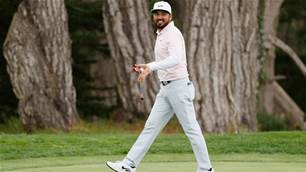