In keeping with the ever-erratic Northern Irish weather, the Australians amidst the 156-strong field at Royal Portrush had mixed fortunes on day two of 148th Open Championship. Which is not to say many of the stories had happy endings.

Although five of the six improved on their opening round scores, only one Aussie, Cam Smith, will be around for the weekend.

Still, when the news was good, it was really good. After a six-birdie, one-bogey 66 that propelled him to six-under par for the championship, the 25-year old Queenslander is T5, two shots behind the halfway leaders, Irishman Shane Lowry and American J.B. Holmes. All of which is a well-deserved reward for some hard work on the range over the last two weeks, after Smith “found something” in his swing at the recent Rocket Mortgage Classic in Detroit. So far he has dropped only two shots to par. “I was getting a little too technical with my swing and just went back to trying to see a shot and hit it,” said Smith, whose last top-ten finish came five months ago in Mexico. “Around here you have to hit so many different shots. Plus, a few putts went in today. I was feeling really good with the putter. I knew if I gave myself anything inside 20-feet I'd have a fairly decent look at it. That was the game plan: not necessarily attacking, but just give myself a chance. And some of them went in. Yesterday I felt like I played the same or maybe even a touch better with the longer stuff, but not quite as many dropped.

“It's always good to be in contention any tournament, whether it's a regular tournament or a major championship. The Open is one I haven't played my greatest golf in. I guess I'm playing decently again.”

The same can be said of just about all of Smith’s compatriots – in their second rounds at least – with the late exception of Jason Day. Bogey-free for the day and strolling along nicely on four-under par through 30 holes, the former U.S. PGA champion suddenly imploded. Six shots were dropped, courtesy of four bogeys and a double-bogey, his only subsequent par coming at the 18th. It all added up to an aggregate of 144, two-over par and one agonising shot too many.

Just as he had done one day earlier when he was apparently too busy to share even the briefest of thoughts with the world, Day had nothing to say after his round. He was last seen stomping off into the middle distance accompanied by his caddie, the despicable Steve Williams. Not surprisingly, the conversation between the two appeared somewhat animated. For the first time in a major championship Tiger Woods and Phil Mickelson both missed the weekend at Royal Portrush. PHOTO: Stuart Franklin/Getty Images.

Anyway, others were happy to discuss their days out on the challenging Dunluce Links. Even those destined to spend the weekend elsewhere. Dimitrios Papadatos added a commendably stout 72 to his opening 83; Jake McLeod shot 71, five shots better than his previous effort. Both were all smiles after experiencing major championship golf for the first time. Theirs was a learning experience, first and foremost.

“It's obviously a big step up playing majors,” said Papadatos. “It's good to see where your game is at. I'm not disappointed where my game is at but it's definitely made me realise I've got a lot of work to do. I was happy to have a good score today and know that I could have been a handful better. It's nice to know I could put up a decent score if I brought my A game.”

“I'll take a lot out of this,” said McLeod, summing up the feelings of the pair. “I was actually quite happy with how I coped. I usually get quite nervous on the first tee. But today I was really comfortable. I had a good time. Next time I'll hopefully do a little bit better.”

For the record, Marc Leishman (78-72) and Adam Scott joined a long list of luminaries whose play did not merit an invitation to return for two more rounds. The former Masters champion’s aggregate of 149 (78-73) was eight shots too many, his shorter than anticipated week here summed up by the sloppy double-bogey with which he finished.

But that disappointing pair were far from alone in their misery. Both Woods and Mickelson – for the first time ever in a major – missed the cut. As did Australian Open champion Abraham Ancer, local man Darren Clarke (who made a seven on the last hole when a bogey-five would have seen him through), U.S. Open champion Gary Woodland, Ian Poulter, Rory McIlroy (despite making seven birdies en route to adding a 65 to his opening 79) and, making what will likely be his last appearance in the championship, 1996 winner at Royal Lytham, Tom Lehman.

Accompanied by his son/caddie, the 60-year-old American shot 78-76, his face filled with emotion at the realisation that it was all over for him after 24 appearances in golf’s oldest and most important event. Walking up the final fairway, he and his son exchanged a few words.

“I just said to him how much I loved him,” said Lehman senior. “And that there was nobody in the world I'd rather be walking down the fairway with right here than you. It meant a lot to me that he was there by my side. This may be my last one, but maybe the next time I'll be caddying for him.”

Which is where we came in. The 2019 Open – a sometimes bright and breezy mix of happy, sad and everything in-between. 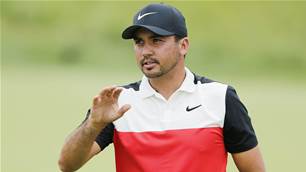